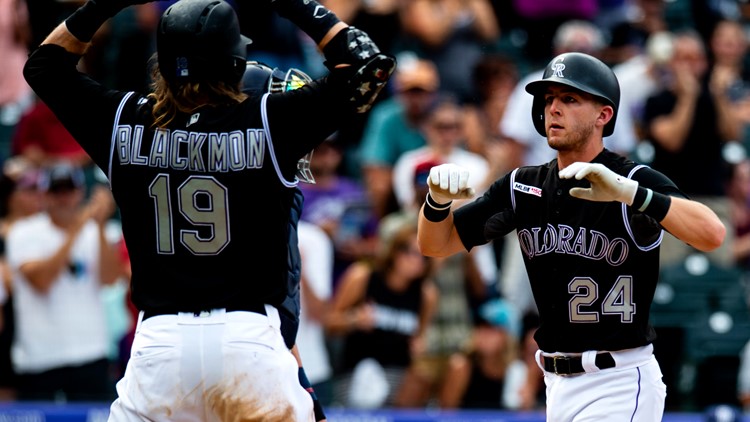 Photo by: AP
Colorado Rockies' Ryan McMahon (24) celebrates with Charlie Blackmon (19) after hitting a home run against the San Diego Padres in the third inning of a baseball game Sunday, Sept. 15, 2019, in Denver. (AP Photo/Parker Seibold)

Ryan McMahon hit two home runs and drove in four runs to lead the Colorado Rockies over the San Diego Padres 10-5 on Sunday and a sweep of the three-game series.

Josh Fuentes also went deep and Chi Chi González got his first major league hit and RBIs in a short outing to help the Rockies win for the fifth time in the last seven games. Colorado swept a series for the first time since taking three from Miami Aug. 16-18.

González, who got his first win in four years in his last outing, struggled with control and left after four innings. His two-run single in the second inning off Cal Quantrill (6-8) put the Rockies ahead for good.

McMahon, Fuentes and Garrett Hampson had three hits each.

Wil Myers, Luis Urias and Josh Naylor homered for San Diego, which has lost four straight. Myers finished 2019 hitting .423 against the Rockies, including going 2 for 3 with two walks Sunday.

Myers' 18th home run, a two-run shot, came after McMahon hit one to left-center to put Colorado ahead 4-1. McMahon added an RBI single in the seventh and Fuentes later hit a three-run shot to left to break it open.

McMahon hit a solo homer with one out in the eighth, his 22nd, to give him the fourth multihomer game of the season and his career. He last did Aug. 17th against Miami.

Rockies: LHP Kyle Freeland (left groin strain) is scheduled to throw a simulated game Tuesday. He has been out since Aug. 23 but hopes to return before the end of the season.

Padres: LHP Garrett Richards is expected to make his season debut at Milwaukee on Monday. Richards underwent Tommy John surgery in the offseason.

Rockies: RHP Antonio Senzatela (9-10, 6.87 ERA) will face the New York Mets for the second time this season to open a three-game series. Senzatela earned his first win since July 14 when he beat St. Louis on Wednesday.