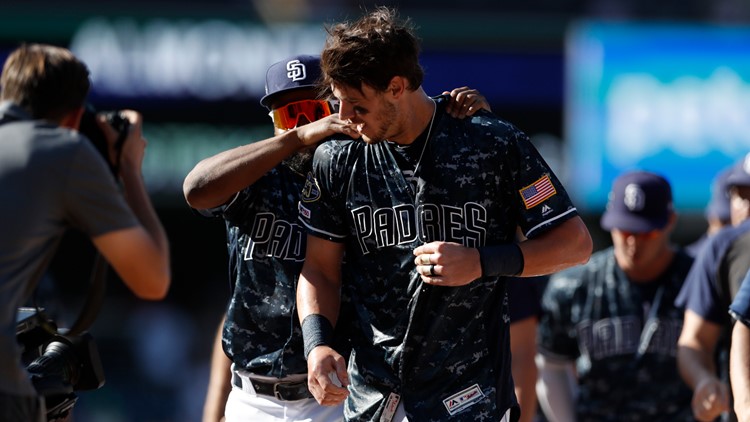 SAN DIEGO — Wil Myers is having a strong finish to what has otherwise been a disappointing season.

Myers singled in Manny Machado with one out in the 10th inning to give the San Diego Padres a 2-1 win Sunday against the Colorado Rockies and a series victory in a matchup between the worst teams in the NL West.

Myers raised his right arm in celebration as he rounded first and was mobbed by happy teammates.

The outfielder has been in and out of the lineup this year as he's struggled at the plate. But the Padres have been giving him a shot and he's responded with season-high eight-game hitting streak.

It was the third career walkoff hit for Myers, who was picked off second base in the fourth inning, costing the Padres a run.

"It's definitely big whenever you struggle and then you have the ability to find it and kind of ride that out," Myers said. "It's nice, being toward the end, especially going into the offseason with something and sticking with that so you have some confidence there. I just want to continue doing this and stay with that plan and riding it out as long as I can."

Myers said he's been putting in extra work before games, "but at the end of the day, if you don't get in the batter's box and execute a plan, none of that stuff really matters. You can work all you want, but as soon as you step in that box it's time to be ready and execute a plan and that's what I'm focused on now."

His plan Sunday was to "look for a fastball and hit it up the middle. That's the way my swing works well. It helps me stay inside the ball, helps me have my swing continue through the strike zone longer and that's what we've been working on."

Machado started the winning rally when he drew a one-out walk off Jesús Tinoco (0-2), who made way for left-hander Sam Howard.

Eric Hosmer walked, and Yency Almonte came on to face Myers, who singled to the gap in left-center.

Myers is the lone player remaining from San Diego's failed win-now approach with high-priced veterans in 2015. An All-Star in 2016, he was given an $83 million, six-year contract extension before the 2017 season and dubbed the face of the franchise. But he didn't embrace a leadership role and has bounced around from the outfield to first base to third base and back to the outfield. The Padres have since signed Machado and Hosmer to big free agent contracts.

The Padres blew a big chance to break a 1-1 tie in the sixth against DJ Johnson, who loaded the bases on a hit, a walk and a hit batsman while also throwing two wild pitches. Bryan Shaw came on with two outs and struck out rookie pinch-hitter Austin Allen.

The Rockies took a 1-0 lead in the third when Pat Valaika hit a leadoff double, advanced on Eric Lauer's wild pitch and scored on Drew Butera's sacrifice fly.

San Diego tied it in the fourth when Luis Urías' two-out bloop single brought in Josh Naylor from second base. Myers opened the inning with a double but was picked off by Peter Lambert before Naylor doubled.

Lambert allowed one run and five hits in five innings.

"We pitched pretty well," Rockies manager Bud Black said. "Again, the last inning, not ideal. Walk, walk and then fastball elevated. There were encouraging signs from a few guys."

Lauer gave up one run and four hits in six innings.

RELATED: Rockies shutout by Padres in San Diego, have lost 10 of last 11 games

Rockies shortstop Trevor Story made a diving stop of a grounder by Machado and flipped the ball with his glove to second baseman Pat Valaika to start an inning-ending double play in the first. Story made another nice play to end the eighth, sliding on the outfield grass to nab Austin Hedges' grounder and then throwing him out with a one-hopper.

"I thought the one up the middle in the first inning, oh man that was awesome," Black said. "Trev's been doing that all year. That was a great play against Hedges. You know, ball in the hole, backhand from his knees. What a play."

Padres rookie right fielder Josh Naylor threw out Daniel Murphy trying to stretch a leadoff single into a double in the second, and Nick Martini threw out Charlie Blackmon trying to take second on Nolan Arenado's fly ball to left in the fourth.

Rockies: RHP Chi Chi González (0-6, 7.29) is scheduled to start Tuesday night's opener of a three-game home series against St. Louis, which is expected to counter with RHP Michael Wacha (6-6, 4.98).

Padres: Rookie RHP Cal Quantrill (6-6, 4.57) is scheduled to start Monday night's opener of a four-game series against the Chicago Cubs, who counter with RHP Kyle Hendricks (9-9, 3.39).