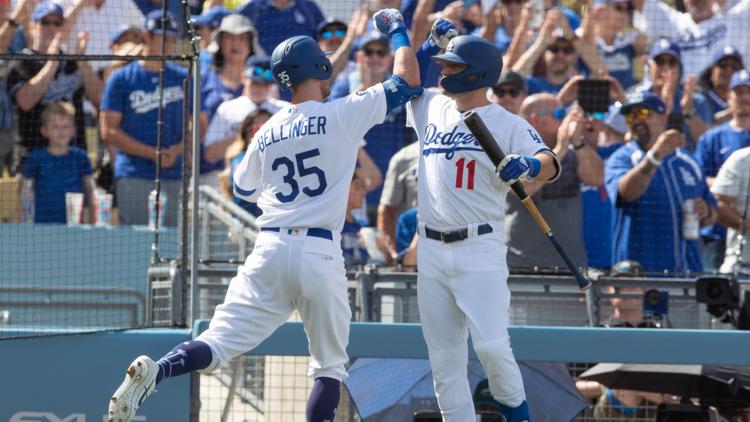 Photo by: AP
Los Angeles Dodgers' Cody Bellinger, left, gets a high forearm slam from A. J. Pollock after hitting a grand slam against the Colorado Rockies during the fifth inning of a baseball game in Los Angeles, Sunday, Sept. 22, 2019. (AP Photo/Sam Gangwer )

Rockies lose to Dodgers, season ends one week from today

With the Dodgers still undecided on a starter for the National League Division Series opener Oct. 3, Ryu (13-5) made his case by giving up three runs on six hits over seven innings with no walks and eight strikeouts. His first career home run was a bonus.

Four batters after Ryu's home run, Bellinger hit his fifth career grand slam and second this season, going deep off left-hander Jake McGee as the Dodgers improved to 100-56 and reduced their magic number for clinching the best record in the NL to one.

The last-place Rockies started fast, getting a home run from Garrett Hampson in the first inning, his sixth. Ryu took over from there, keeping the Rockies off balance until Sam Hilliard's two-run home run in the seventh. It was Hilliard's sixth of the season.

Despite entering with an 11.85 ERA over his previous eight starts, Rockies right-hander Antonio Senzatela held the Dodgers in check early with four scoreless innings. That all changed with Ryu's leadoff home run in the sixth as the right-handed batter just cleared the wall in right-center.

A Joc Pederson walk, followed by singles from Gavin Lux and Justin Turner loaded the bases and chased Senzatela from the game. The move to the left-handed McGee was not the answer as Bellinger hit his 18th home run against a lefty this season. He entered the year with 18 homers against lefties in his previous two seasons.

The Dodgers finished 8-1 against the Rockies at home this season and 59-22 overall at Dodger Stadium, the best home record in Los Angeles Dodgers history.

Rockies: 3B Nolan Arenado was back in the starting lineup Sunday after missing Saturday's game with a stomach bug.

Dodgers: INF Max Muncy missed his second consecutive game with a tight left quadriceps, an injury that ofccurred during Friday's game against the Rockies. He is expected to start when the Dodgers open their final road trip of the season Tuesday at San Diego. . RHP Joe Kelly has made just one appearance over the last eight days as he continues to work through an unspecified injury that the Dodgers have labeled a leg issue which is not related to a muscle or ligament.

Rockies: Following an off day Monday, Rockies right-hander Jeff Hoffman (2-6, 6.71) will take the mound at San Francisco in the series opener against the Giants.

Dodgers: Following an off day Monday, left-hander Rich Hill (4-1, 2.68) will return to the mound Tuesday to open a series at San Diego after knee soreness cut down his return from a forearm strain on Sept. 12 at Baltimore.