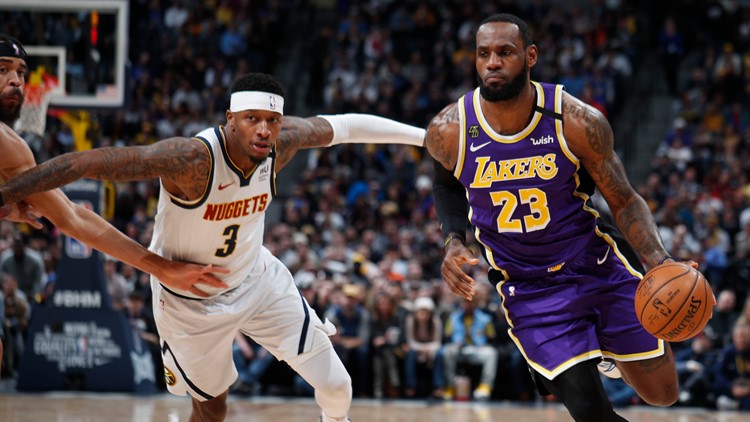 LeBron James posted a triple-double and Anthony Davis scored seven of his 33 points in overtime to push the Los Angeles Lakers past the Denver Nuggets 120-116 Wednesday night.

James had 32 points, 14 assists and 12 rebounds for his 12th triple-double of the season as the Lakers headed into the All-Star break with a four-game lead over second-place Denver in the Western Conference.

The Lakers improved their NBA-best road record to 23-5.

Jamal Murray led the Nuggets with 33 points, but All-Star Nikola Jokic was in foul trouble and made some crucial blunders in the extra period, including a turnover on a bad pass with 19 seconds left after he passed up an open 3-pointer with Denver down 119-116.

Jokic has 22 points and 11 rebounds for Denver, which saw its four-game winning streak snapped.

James missed a fadeaway 15-footer at the buzzer, sending the game into overtime.

Gary Harris tied it at 111 when he drove past his man and hit the bucket with Kentavious Caldwell-Pope in his face. The Lakers called timeout with 23.9 seconds left and James held the ball until the final few seconds when he drove and put up his errant shot.

LA opened the second half with a 3-pointer by Danny Green and a thunderous dunk by James for an 11-point lead, the Lakers' largest of the night. But the Nuggets used an 11-0 run capped by Jokic's long 3-pointer to tie it at 66.

Jokic picked up his fourth foul and went to the bench with 4:44 left in the third quarter. The Nuggets vehemently argued the call because Davis took three steps in the paint before contact and should have been called for a travel.

But his teammates picked up the slack to give the Nuggets an 87-84 lead heading into the fourth quarter. Jokic returned with Denver trailing 97-94 with 7½ minutes left in regulation.

The Lakers fell behind 45-32 early in the second quarter, but closed the first half on a 29-10 run fueled Davis' three consecutive baskets off Denver turnovers.

James' jumper put Los Angeles ahead 53-51 and his drive to the hoop with one-tenth of a second left gave the Lakers a 61-55 halftime lead.

Lakers: Took control in the second quarter by outscoring Denver 20-8 in the paint. ... The Lakers forced Denver into a pair of 24-second violations, including on the game's first possession.

Nuggets: Jokic was honored for his All-Star selection in a pregame ceremony that included a framed All-Star jersey. ... Reserves Paul Millsap, Monte Morris and Noah Vonlieh each sank their only 3-point attempt of the first half, whereas the starting five went a combined 3 for 10 from long range.

Lakers: host Memphis on Feb. 21 after the All-Star break.