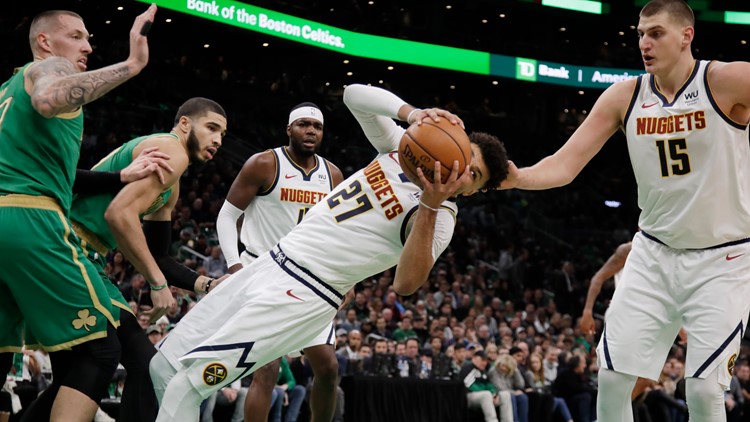 Photo by: AP
Denver Nuggets guard Jamal Murray (27) looks for an outlet as he falls to the court against the defense of Boston Celtics forwards Daniel Theis (27) and Jayson Tatum, second from left, while Nuggets center Nikola Jokic (15) looks on in the first quarter of an NBA basketball game, Friday, Dec. 6, 2019, in Boston. (AP Photo/Elise Amendola)

BOSTON — Jayson Tatum scored 26 points and Jaylen Brown added 21 on Friday night to help the Boston Celtics beat the Denver Nuggets 108-95 and remain perfect at home for the season.

Kemba Walker scored 19 for the Celtics, who won for the fifth time in six games and improved to 9-0 at home. No Boston-area pro team has lost a home game since the Baltimore Orioles beat the Red Sox at Fenway Park on Sept. 28.

Nikola Jokic had 30 points and 10 rebounds for Denver, which has lost three of its last four games.

The Celtics and Nuggets were back together for the first time since Nov. 22, when Walker had a head-to-torso collision with teammate Semi Ojeleye. Walker was taken off on a stretcher, but he missed only one game with a neck injury.

Boston made the first two baskets of the game and never trailed, leading by as many as 10 points in the first quarter and 15 in the second. The Celtics led 74-64 with less than two minutes left in the third when they ran off the last 11 points of the quarter, including six by Brown and a step-back 3-pointer by Tatum in the final seconds.

Nuggets: Gary Harris hit his 500th career 3-pointer. ... Jokic made a 3-pointer for the first time in seven games, hitting one in the fourth quarter. He was 1 for 5 on the night and had missed 16 in a row dating back to Nov. 20.

Celtics: Coach Brad Stevens said injured forward Gordon Hayward will return to practice on Sunday and be ready to play before Christmas. ... Marcus Smart returned after missing one game with an oblique injury and illness. Every fan at the game received a poster of him. He had nine points in 28 minutes. ... Retired Patriots tight end Rob Gronkowski was sitting courtside.

Nuggets: At Brooklyn on Sunday.