The Denver Pioneers have clinched 22-straight NCAA regional berths and are looking to go back-to-back to the national championships. 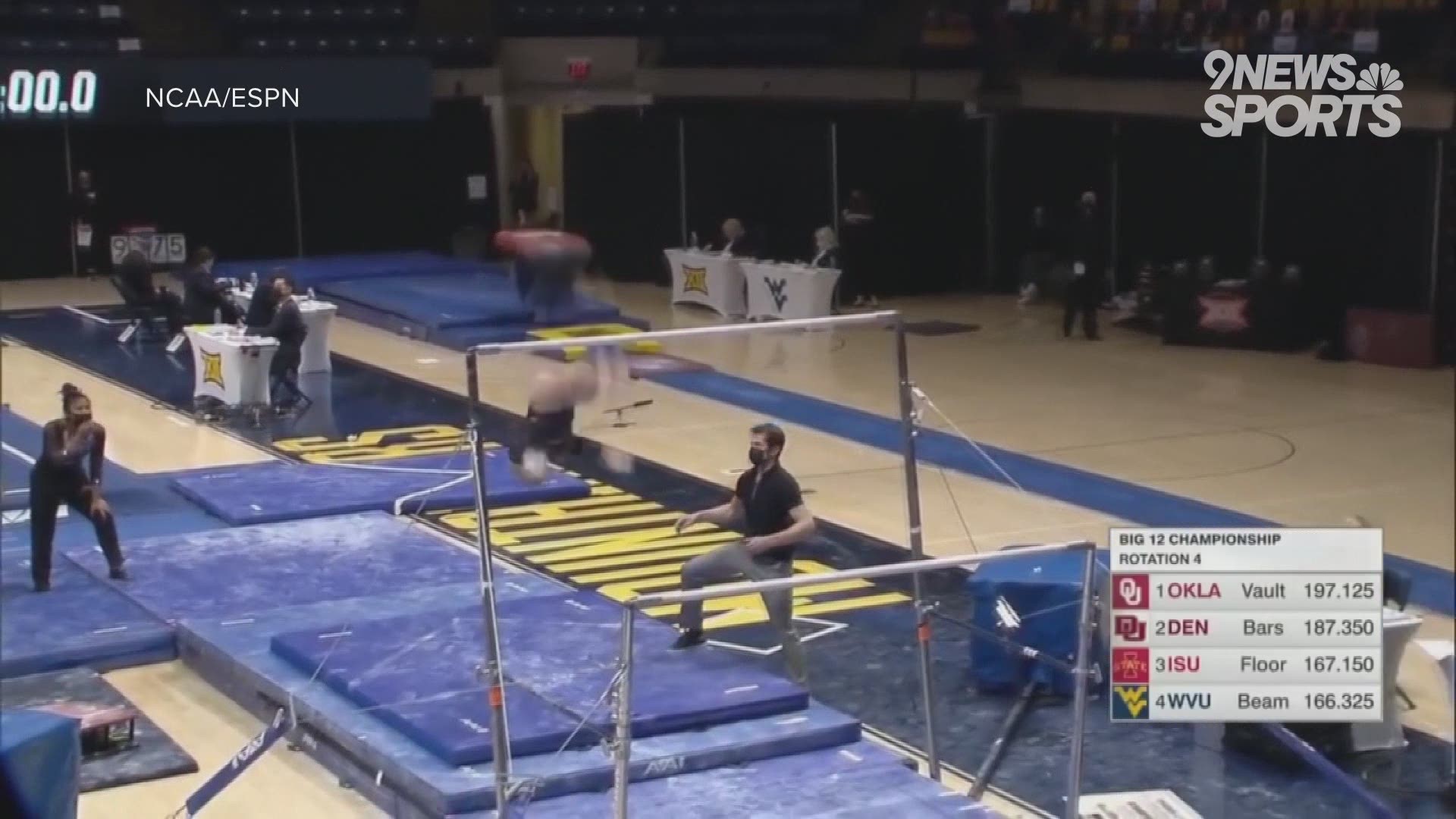 DENVER — To be the best, you need to beat the best -- and that's exactly what Denver accomplished last Saturday at the Big 12 gymnastics championships.

"This is our fifth year as an affiliate member in the Big 12, and Oklahoma is tied for first in the country," Denver Head Coach Melissa Kutcher-Rinehart said. "And so that was to me, a four-year process. A four-year process of building and building."

"Sometimes we talk about taking advantage of your opportunities, but what they did was create an opportunity and then took advantage of it," she said.

It was a team effort all around, which ended with a mic-drop of a landing by the Big 12 Gymnast of the Year, Lynnzee Brown.

"Scoring a 10 has been a goal of mine in any other event other than floor, since I had already accomplished that," Brown said. "I was just super excited to attain that and be among the greats."

Her perfect 10 on bars came in the final routine of the day. The score earned Brown the all-around title with a 39.725, making her the second in program history to achieve the high honor, behind Maddie Karr.

"Everyone wants to hear something special about Lynnzee, and yes Lynnzee is incredibly special, but what is the most special about Lynnzee is her words and actions match," Kutcher-Rinehart said. "So she earns the right to put herself in a position in competitions to have that success or that scoring ability because of what she does every single day in the gym."

It was a moment the whole team will never forget, yet ironically, a competition that Kutcher-Rinehart was unable to attend due to COVID-19 contact tracing protocols.

"That's 17 years that I have not missed a competition," she said, "I can tell you that I was home watching it and my husband said to me that you can never do this again!"

Brown said it was sad that she wasn't there, but they were fueled from her absence.

"We were doing this for her," she said. "We knew how much this meant to her, being the head coach for so many years, this would've been the first in her career, so we were super excited to do that for her."

Emily Glynn, along with the other two senior captains Brown and Mia Sundstrom, knew how to control the nerves of the underclassmen.

A new banner will hang in the rafters, but it's only a stepping stone along the way to a long and successful postseason. Kutcher-Rinehart has advanced to the NCAA Regional round every year since she started coaching 22 years ago, and expects much bigger things from this squad.

"Regionals is great, obviously, but our goal is always Nationals, always to be one of those top programs in the country, to do things like capture our first-ever Big 12 conference championship, and to have individual national champions," she said.

The team has the chance to go back-to-back to the NCAA National Championships for the first time since 2007-08.

"We have some big goals still to accomplish," Glynn said. "I think enjoying practices, enjoying the meets, and being present in the moment is super important to us, and just continuing to build off of the confidence and growth that we've developed over the last half of the season."

In addition to the team goals, Denver has the chance to win back-to-back individual National Championship titles with Lynnzee Brown on floor. Brown was a co-champion in 2019, with the 2020 NCAA tournament being canceled. She's now using this most recent performance at the Big 12 Championship as a springboard into the next round.

"I want to draw from that experience to make me more confident going into Regionals, to just solidify that not just I, but my team deserves to be here."