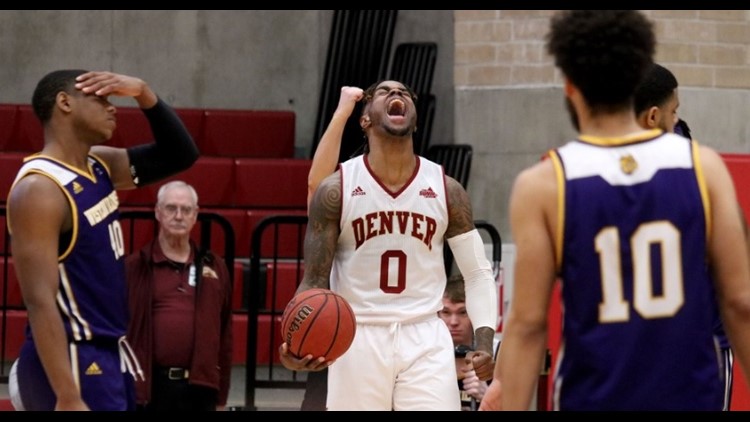 DENVER — Not wanting his senior season to end, University of Denver men's basketball guard Ade Murkey willed his team to its first Summit League Tournament appearance in two years on Saturday, defeating Western Illinois 69-63 in Hamilton Gymnasium. The victory clinched the No. 8 seed for the Pioneers and eliminated the Leathernecks from postseason play.

Murkey carried his team with a game-high 33 points and seven rebounds, the only DU player to reach double figures on the afternoon.

WIU was led by four players in double figures, with Ben Pyle scoring a team-high 14 points.

The Crimson and Gold's defense was suffocating on Kobe Webster, holding the junior to 12 points on 4-for-20 shooting.

DU was able to get to the line in the contest, outshooting Western Illinois 27 to nine in free throw attempts.

Denver opened fast, jumping out to a 9-3 lead by the first media break, highlighted by Tristan Green's opening reverse dunk for the first points of the contest.

The Pioneers got their first double-digit lead after a made 3 from Alperen Kurnaz at the at the 11:35 mark, his first points of the contest.

DU kept its foot on the gas the rest of the half, growing its lead to as large as 17 in the opening 20 minutes of action before a late run by Western Illinois made it an 11-point contest at the half, 36-25.

Murkey continued with his stellar play from the last two months, scoring 15 in the period from all levels on the court.

The key, though, was the Crimson and Gold's defense, limiting the Leathernecks to just 25 points on 25.7 percent shooting. The 25 points allowed set a new season low for the first half.

In the second half, Western Illinois came racing back with an 18-9 run to start the first 8:29 of the period, bringing it to a two-point Denver lead at 45-43.

Neither team would hold more than a four point lead the rest of the way but would change leads several times over the next 11 minutes.

Murkey energized the crowd and his teammates late with a steal and dunk with 2:36 remaining to put DU up three.

The Leathernecks went up for the final time on a jumper from Zion Young with 1:45 left on the clock, making it 63-62 WIU.

But Murkey countered with getting to the line and converting, putting the Pioneers back up one.

The Crimson and Gold picked up some defensive stops the next few possessions and made their free throws to seal the victory and keep its season going.

UP NEXT:
Denver (7-23, 3-13 Summit League) will take on the No. 1 seed of either South Dakota State or North Dakota State in the Summit League Tournament on Mar. 7 at the Denny Sanford PREMIER Center in Sioux Falls, S.D. Times and opponent will be announced later this weekend.

RELATED: DU Gymnastics vaults to the top of the rankings before first home meet