Buzz building ahead of LSU vs. Clemson title game in New Orleans

The Tigers (neither ones) are not letting the wait get to them. 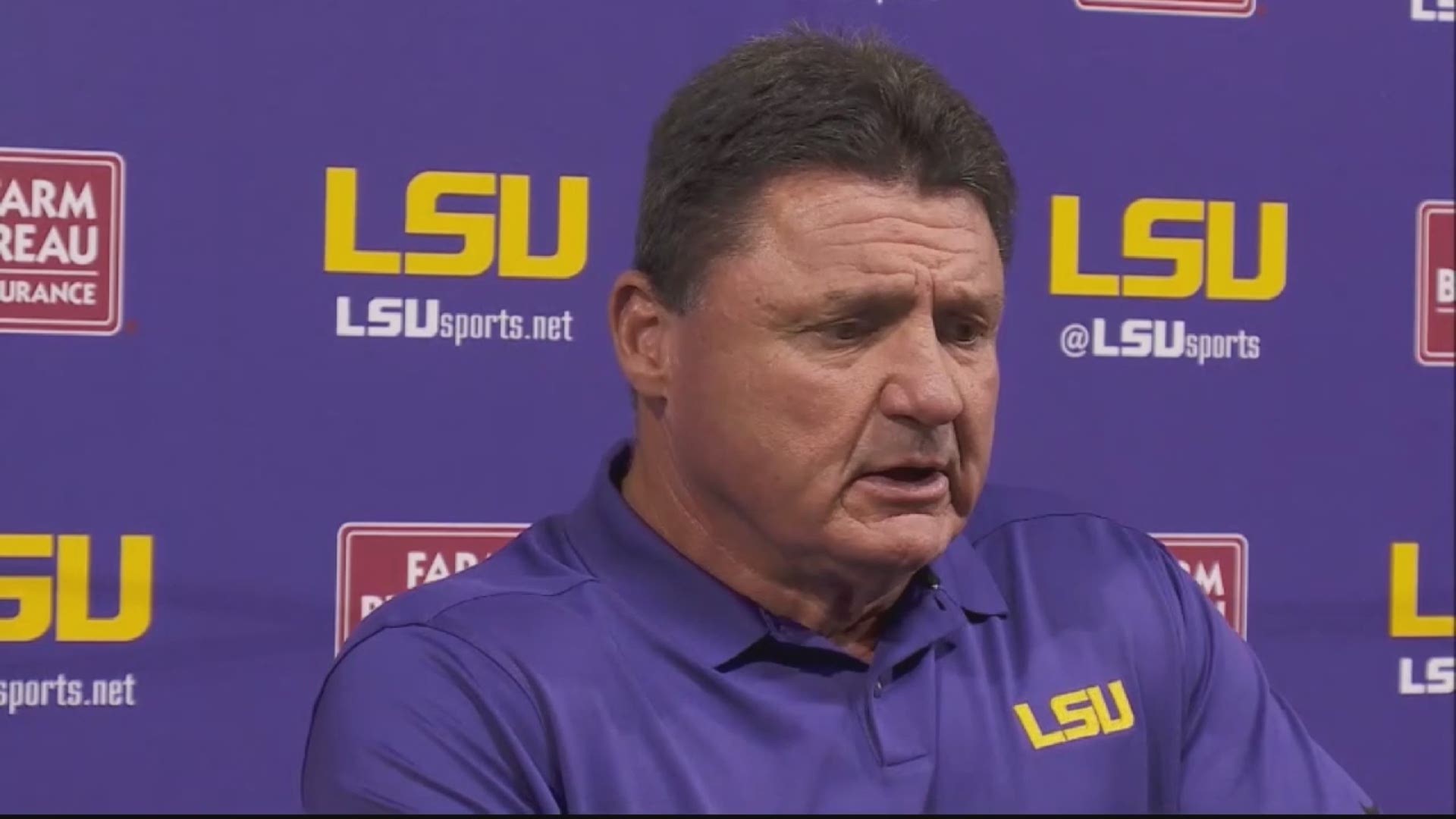 CLEMSON, S.C. — Clemson quarterback Trevor Lawrence was ready to get right back on the field to play for another College Football Playoff title after the Tigers'hard-fought semifinal win over Ohio State last month.

That changed once he woke up the next day.

"I was really sore so I was glad to get some extra time," he said.

But there have been questions whether the longest break in the CFP's six seasons has been good for the sport, especially in the shadows of the NFL playoffs.

But like Lawrence, it seems most everyone from the coaches and players to Superdome officials and fans seem to have rolled with the break as they wait for the showdown — of course, they didn't have much of a choice.

CFP executive director Bill Hancock said the game is a sellout — just like the first five CFP championships And even with the ongoing NFL playoffs, Hancock believes the buildup and excitement for the college title is as strong as ever despite the lengthy layoff.

Hancock said the proximity of LSU's campus (about 80 miles northwest of New Orleans in Baton Rouge) guarantees an intensity and excitement for the event.

"I think this buzz is because of the popularity of college football, plus the match up of two great teams," Hancock said in a text to The Associated Press.

RELATED: The Dome is LSU's home when it comes to championship games

Clemson coach Dabo Swinney has been in four of the last five CFP championships, winning in 2016 after a nine-day break and last season when the Tigers again had nine days to get back to campus after the Cotton Bowl in Dallas before flying cross-country to California.

The quick turn didn't seem to bother Clemson during its 44-16 title game victory over Alabama.

"You know, I'd prefer to just go play, to be honest with you, if I was writing the schedule out," Swinney said. "But hey, things always happen the way they're supposed to, and in this particular case I'm really glad that we've got a couple extra days."

This is LSU's first time in the CFP title game, but the Tigers are not letting the wait get to them. It was three weeks between LSU winning the Southeastern Conference championship over Georgia before defeating Oklahoma in the Peach Bowl to reach the championship.

"A game like this you just have to stay in your routine and don't stray from it," said quarterback Joe Burrow, the Heisman Trophy winner. "You can really pump yourself up and get a little too excited, but I'm just going to stay in my routine, do what I've been doing, and treat it like any other week."

RELATED: The Dome is LSU's home when it comes to championship games

The break has made it easier for some fans to make arrangements, said Ted King, a lifelong Clemson fan who has been to the team's three previous trips to the CFP's final game.

He remembers a year ago trying to book flights and a hotel in California — the game was played in Santa Clara, NFL home for the San Francisco 49ers — for he and wife, Chris, before Clemson's semifinal game with Notre Dame was over.

"I am so glad for that extra week," said King, a retired executive with a utility company.

This time, the Kings will drive South, stopping to see family in Alabama before arriving in New Orleans on Sunday. On the way back, they'll stop in Alabama and Georgia for more visits before returning to Irmo, just north of South Carolina's capital of Columbia.

"We get to have some family time and get to see the Tigers play for a title," King said.

ESPN announcer Chris Fowler said the delay was simply a quirk of this year. Teams had two bye weeks this season, something that's not normal to the game.

"Ideally, for momentum and fan interest, you don't want to wait 16 days," he said. "We will be prepared because that's a lot of time to get ready for teams that we already know."

LSU coach Ed Orgeron, a Louisiana native who has his team on the verge of its first national title since 2007, understands some of his down time will be fielding calls from hometown people desperate for tickets.

Where the break might most affect the game is on defense, said ESPN analyst Kirk Herbstreit. The teams' coordinators Dave Aranda of LSU and Brent Venables of Clemson — two of the highest paid assistants at more than $2 million a year — will have extra study time to find flaws in the opposing defense.

"They've got the same amount of time as well," Clemson linebacker Chad Smith, "so it's going to be interesting to see how all these weeks come into play Monday."