USC roars to a 35-31 comeback win over Colorado

The Buffs continue to slide despite playing their best game in a month. 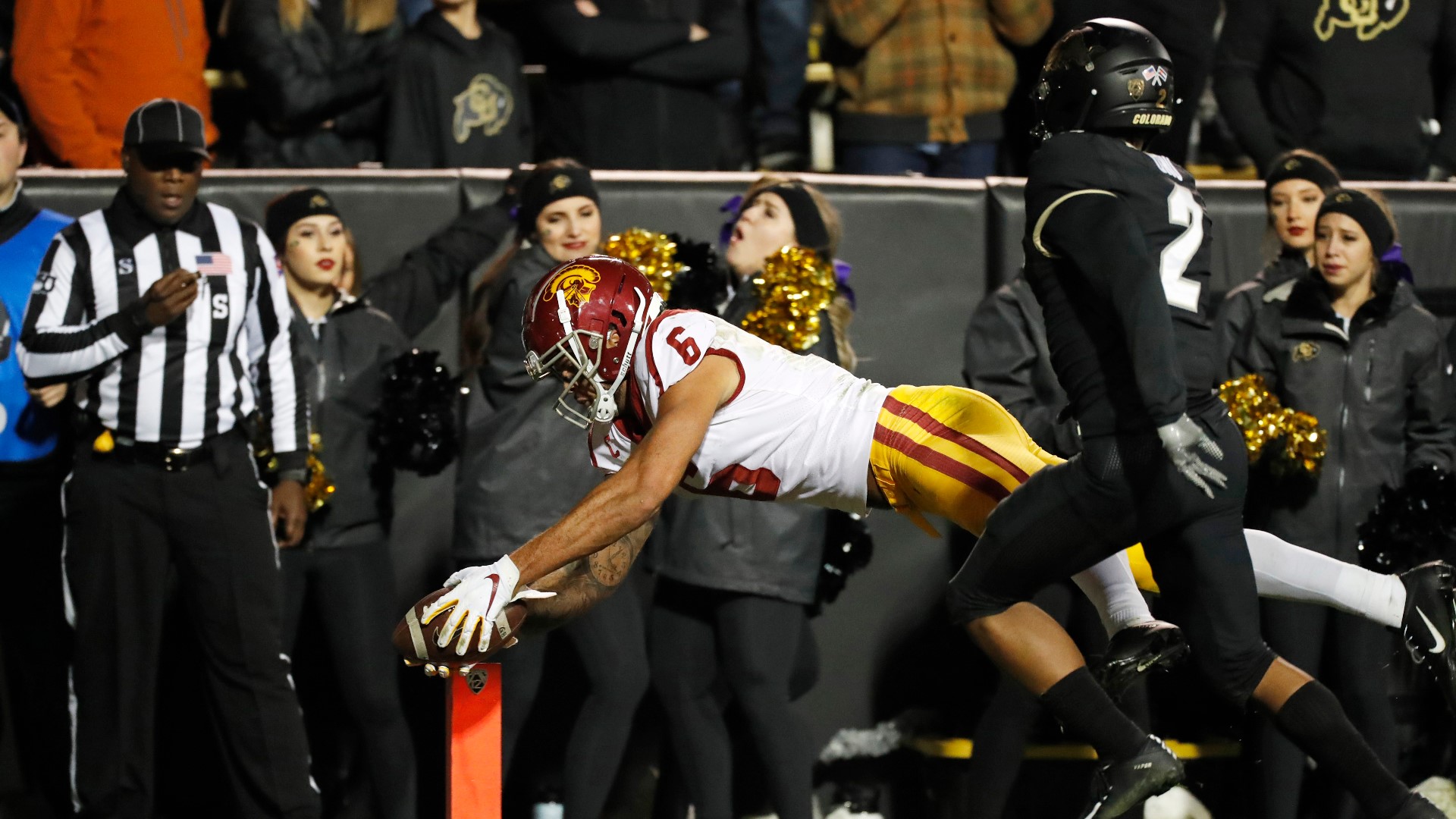 BOULDER, Colo. — Kedon Slovis threw a 37-yard touchdown pass to Michael Pittman Jr. with 2:15 left and Southern California escaped Folsom Field with a 35-31 win Friday night over the hard-luck Colorado Buffaloes, who nearly pulled off their first ever victory over the Trojans.

USC caught a couple of big breaks on the winning touchdown drive.

The first came when Slovis was strip-sacked by outside linebacker Jamar Montgomery for a 10-yard loss but running back Kenan Christon recovered for the Trojans.

Slovis then hit Drake London for 19 yards and on third-and-1 from the 50, Quincy Jountti looked like he was stuffed, but the officials spotted the ball for a first down, and four plays later Pittman took a short pass and weaved his way through the Colorado secondary for the go-ahead score.

He also caught a 44-yard TD pass earlier in the fourth quarter.

Steven Montez threw three TD passes, including a 71-yarder to Laviska Shenault Jr. on the second play of the second half but he wasn't the same after taking a hard hit from safety Hunter Echols late in the third quarter, and the Buffaloes blew a 10-point fourth-quarter lead.

Montez's backup, Blake Stenstrom came in with 4 seconds left in the third quarter and gained 27 yards on a keeper but was replaced by Montez to start the fourth quarter. However, an 18-yard gain by running back Alex Fontenot was negated by tight end Jalen Harris' hold and the drive fizzled.

The Trojans pulled to 31-28 on Slovis' 44-yard touchdown toss to Pittman with 11:25 remaining. Pittman finished with 156 yards on seven catches and Slovis completed 30 of 44 passes for 406 yards.

The Trojans won the coin flip and went 75 yards in just three plays and 59 seconds with wide receiver Amon-Ra St. Brown running it in from 37 yards out for a quick 7-0 lead.

Colorado responded with 17 consecutive points on a 22-yard field goal by James Stefanou and a pair of 7-yard touchdown passes from Montez to K.D. Nixon as Colorado took a 17-14 halftime lead.

Montez's first TD throw in three games followed an interception by freshman cornerback K.J. Trujillo, who also had a sack and a key pass breakup on third-and-1 in the first half.

The Trojans went with an empty backfield after falling behind 17-7 and drove 75 yards in nine plays with the payoff coming on a 3-yard touchdown pass from Slovis to Christon. One play earlier, Slovis fumbled at the 3 when he was blasted by safety Mikial Onu. London recovered the ball for USC.

USC: The Trojans caught a ton of breaks but improved to 4-1 in the Pac-12 South behind more stellar play from freshmen including Slovis and Christon, who rushed for 85 yards on 14 carries.

Colorado: The Buffs continue to slide despite playing their best game in a month. Shenault showed he's back after a core muscle injury slowed him for several weeks. He had 172 yards on nine catches.