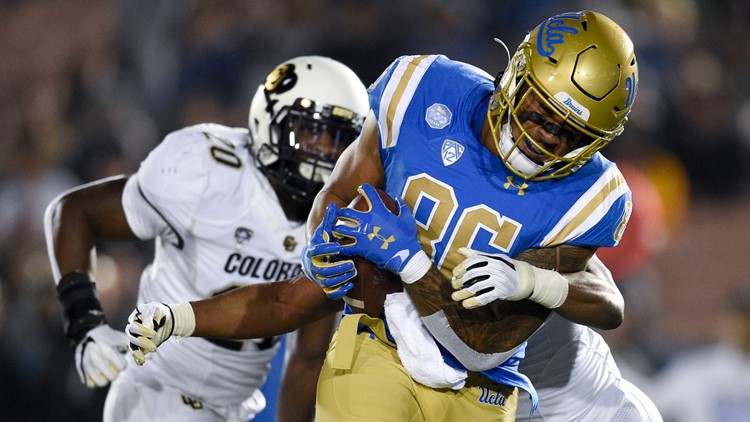 Photo by: AP
UCLA tight end Devin Asiasi , front, catches a pass for a touchdown while defended by Colorado safety Mikial Onu during the first half of an NCAA college football game in Los Angeles, Saturday, Nov. 2, 2019. (AP Photo/Kelvin Kuo)

Kelley, who came into the game leading the Pac-12 in rushing at 105 yards per game, scored both Bruins' second-half touchdowns. The senior — who has 10 rushing scores this season and nine in the past five games — got his fourth 100-yard game of the season with a 35-yard touchdown with 4:14 remaining in the game to extend UCLA's lead to 31-14. He scored from 5 yards out during the third quarter.

Colorado: Mel Tucker's first year in Boulder started off well with wins in three of his first four, but the Buffaloes have dropped five straight and have allowed 30 or more points in 14 straight games dating back to last season.

UCLA: The Bruins have won three straight games for the first time since 2015. After appearing woeful for the first half of the season, Chip Kelly's squad could get bowl eligible with wins in two of their final three games.

Colorado: Hosts Stanford next Saturday. The Buffaloes have not faced the Cardinal since a 10-5 victory in 2016.

UCLA: Has a bye week before traveling to Utah on Nov. 16. The Bruins have a three-game losing streak against the Utes, including 41-10 last year at the Rose Bowl.