Wesley and a co-worker were selling roofing door-to-door when a 65-year-old man accused them of being 'antifa' and held them at gunpoint. 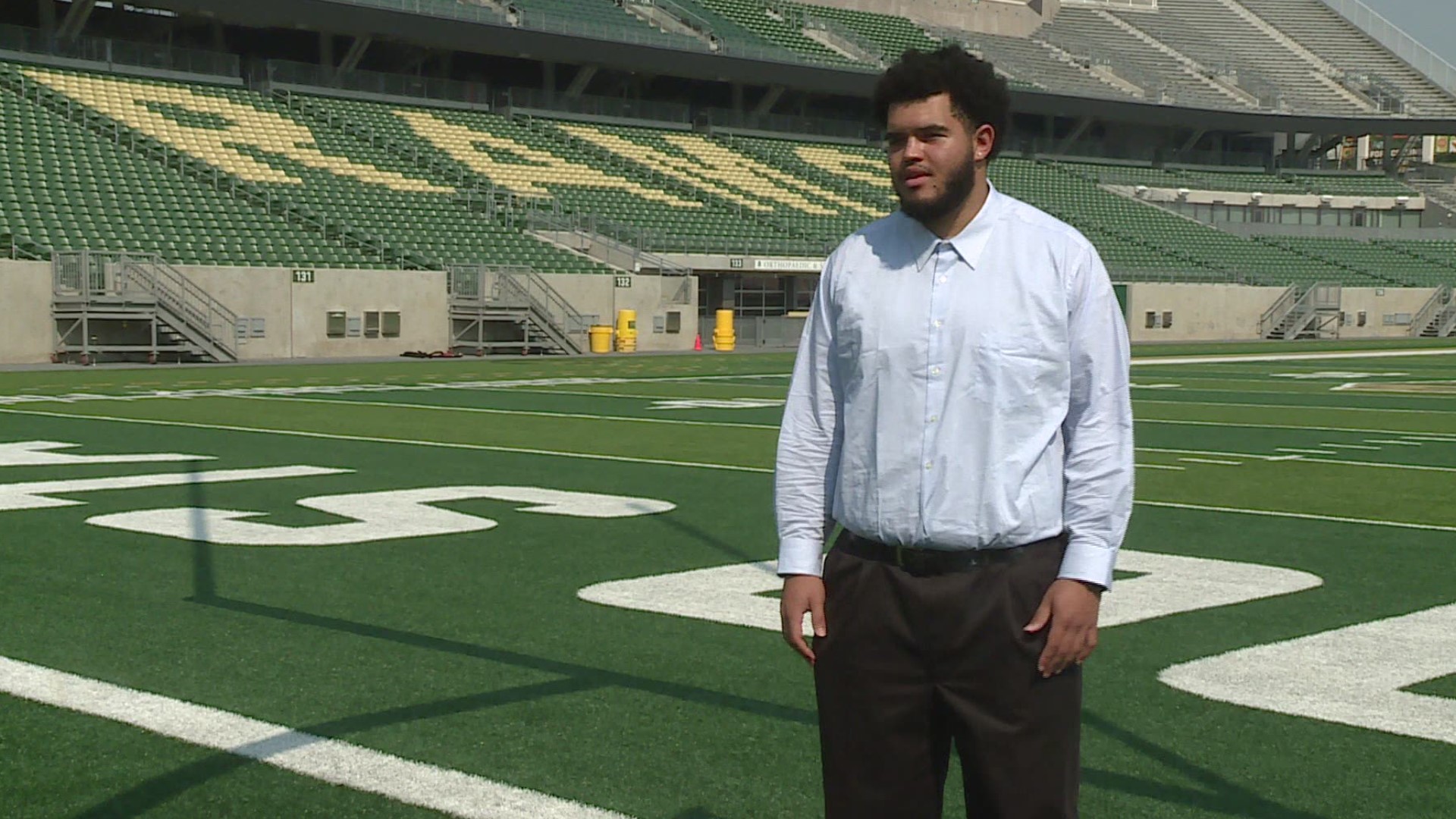 “For me, football is a game of friends and family," said Wesley, a redshirt junior on the CSU football team. "Obviously, it’s strategy to some other people, it’s entertainment (to others). But for me, it’s just going out there and having fun."

Tuesday, Wesley walked onto Sonny Lubick Field at Canvas Stadium for the first time in awhile. It's where he said great memories have been forged with his teammates.

It’s also the place the 21-year-old shared details from the darkest day of his life.

“I remember standing in front of my teammates. I was looking at my roommates and I could see the tears in their eyes. And it made me tear up," said Wesley. “It made me think about all the memories and the connections that we shared together. And the possibility of me not being here and being able to make more.”

A few months ago, the 6-foot-6, 300-pound offensive lineman took a summer job as a door-to-door roofing salesman. On June 11, while working in Loveland, he said he and a supervisor were approached by a man with a gun.

“I remember logging some data into my phone and turning around and seeing an orange optic. I remember seeing a green hat and hearing the commands to get on the ground. And that’s exactly what I did," said Wesley about the harrowing encounter.

According to court documents, Scott Gudmundsen called 911 and reported "antifa" was in his neighborhood. He told dispatchers he was going to confront them.

The 65-year-old forced Wesley and his co-worker to the ground at gunpoint, the documents say. Wesley pleaded for his life while police say Gudmundsen knelt on his neck and jammed a gun barrel into his back.

Police said they found Gudmundsen standing over Wesley, pointing a pistol at his back. They arrested him on charges of felony menacing and false imprisonment.

"It felt like a bad dream," Wesley said. "You wake up in the middle of the night and you’re just so sweaty. You kind of have to take a step back and try to figure out what happened. And I remember the following week it was like that every night."

The encounter left Wesley shaken up. He’s undergoing counseling but admits it hasn’t been easy.

“I think the current process that I’m in right now is trying to find ways to navigate it; how to learn with it, cope with it," Wesley said.

He said he's determined not to let this incident define him and is hoping to use his experience to affect change -- real change -- in the community.

"I think the most important way is just to listen.  And try to imagine your loved one in a situation that I was in," he said. "For the people that don’t understand why the Black community is so upset, so sad and so tired of everything that’s going on, try to put yourself in that situation of you being on the ground. Someone putting their knee on the back of your neck, jamming a gun into you. No one wants that, no one can imagine that, but it's real and it happened to me.”

Wesley said the start of CSU’s fall semester has been helpful. He said he dreams of one day becoming a guidance counselor. But before that time, there’s unfinished business on the football field.

"I want the first game to be against CU Boulder," Wesley said. "Right here (at Canvas Stadium at Sonny Lubick Field), so I’m looking forward to it. I’m training for it. And hopefully getting ready for normalcy again."

After Gudmundsen’s arrest prosecutors added additional charges of impersonating a police officer and prohibited use of a firearm.