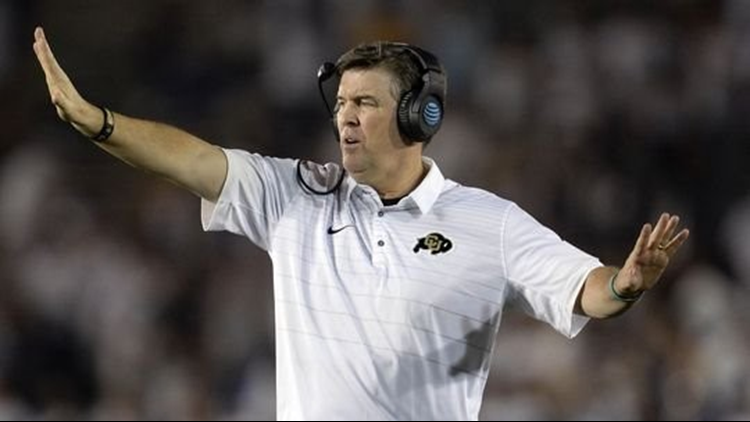 Getting fired and demoted usually means taking a financial loss in just about every normal business.

Not in college football. And not for Mike MacIntyre, who is set to make more money than he ever has in his life over the next three years despite his termination last month at the University of Colorado.

Colorado athletics spokesman David Plati also confirmed to USA TODAY that CU is on the hook to pay MacIntyre his full contract buyout of $10.3 million in monthly payments through 2021. His contract at Colorado initially was signed shortly after his hiring in late 2012 and said he had a duty to obtain new employment in the event of his firing from CU. It also said that the buyout owed to him would be reduced by any amounts he received as a college head coach, NFL head coach or NFL assistant coach.

In this case, he did not get one of those jobs and instead took a demotion as a college assistant coach. Therefore CU is on the hook to pay him the full buyout, setting him up to become far richer for being fired than he would have been if he had been retained at Colorado, at least over the next three years. That's up to $4.9 million in average combined pay per year vs. about $3 million in guaranteed pay that he was due each year at CU, plus an extra $300,000 per year in incentives he was likely to earn.

RELATED | How does CU Boulder pay a new football coach, plus the one they fired?

The university could try to reach an agreement with him to pay him less, but his contract states he "shall be entitled to claim damages from the University" up to what was left on certain parts of his contract, which the school said was $10.3 million.

MacIntyre’s agent didn’t return a message seeking comment. His record at CU was 30-44, including one winning season, in 2016, out of his six seasons as the Buffaloes’ head coach.

Colorado recently replaced MacIntyre with Mel Tucker, who made $1.5 million this past season at the defensive coordinator at Georgia. At Colorado, Tucker will make $2.4 million in guaranteed pay his first year as head coach.

To reduce their financial risk, colleges often put language in coaches’ contracts that requires them to seek new jobs in the event they are fired and to use their new pay to reduce the buyout they are owed for being fired. It’s a matter of negotiation between the coach, his agent and school at the time of the coach’s hiring. But such buyout reduction stipulations often are not limited to the fired coach becoming a college head coach or NFL coach – simply because a fired coach doesn’t bounce back into that kind of job right away.

Asked why CU limited a buyout reduction to those specific job ranks, athletics spokesman Plati said, “that’s the latest with head coaches” and suggested it came from MacIntyre’s agent. CU has said the buyout money owed MacIntyre, 53, would not come from tuition money, taxpayer dollars or the campus general fund.

Such a buyout still would be one of the biggest of the firing season. Fired North Carolina head coach Larry Fedora is owed $12.2 million through Jan. 15, 2023. His contract does not expressly state that he must find another job, but it does state the buyout amount “shall be reduced by any compensation received by Coach during the time period remaining under this Agreement for services provided by Coach … in a coaching position for any college or professional football program or … as a commentator for any national sports media outlet.”

Some contracts don’t contain any stipulations for reducing a fired coach’s buyout. Fired Louisville coach Bobby Petrino is owed a little more than $14.2 million, payable in quarterly installments. His contract is silent on offsetting that buyout with pay from a new job. He is getting what he is owed for the remainder of this contract year, which ends June 30, 2019, plus three additional years.

Last season, head coach Kevin Sumlin was owed $10.4 million when he was fired by Texas A&M, payable within 60 days of his termination. His contract was silent on mitigating that amount with pay from a new job. He is making $2 million at Arizona this season and next season.

RELATED | How does CU Boulder pay a new football coach, plus the one they fired?