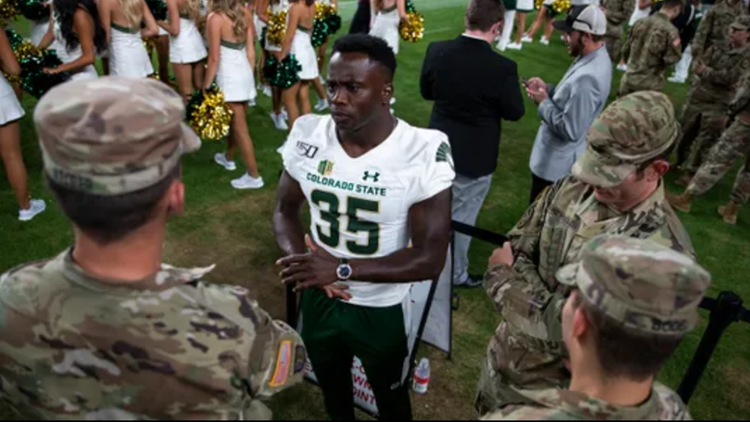 Photo by: Timothy Hurst/For The Coloradoan
Colorado State football running back Josh Griffin talks with some of his fellow ROTC cadets on the sidelines before the Rocky Mountain Showdown rivalry football game against the University of Colorado on Friday, Aug. 30, 2019, at Broncos Stadium at Mile High in Denver.

Oldest player in college football is a CSU running back still on active duty in U.S. Army

He has trained with U.S. Army Rangers and Green Berets and has supported both on missions he's not allowed to talk about.

He’s a staff sergeant who has spent most of his 13 years in the Army working in special operations.

He’s also the oldest player on a major college football team in the country this year, approaching his 33rd birthday and beginning his second season at Colorado State.

The Army, he said, taught him how to take care of his body and remain fit. And by admitting him into a special program to complete his final two years of college while remaining on active duty in an ROTC program, it provided Griffin an opportunity to pursue a dream he thought had died when he tore a hamstring during his senior year of high school.

“It was always a dream for me to play ball, and then when I got the opportunity to come back to school to finish a degree, I was like, OK, let me go to a school where I can see if I can walk on,” Griffin said.