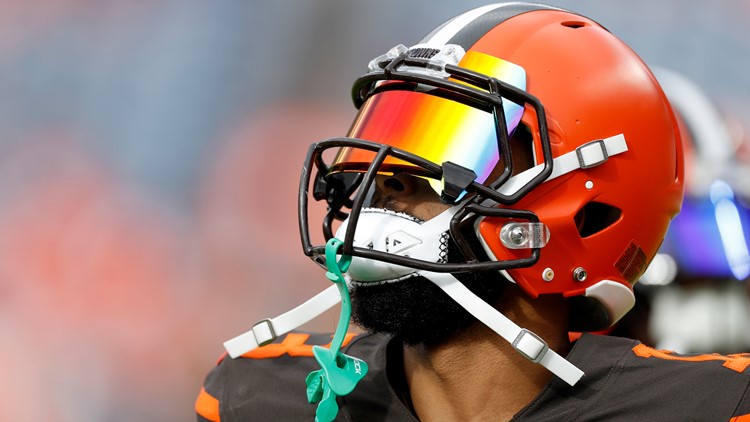 Following the Cleveland Browns' 24-19 loss to the Denver Broncos on Sunday, one criticism in particular seemed to get directed toward Odell Beckham Jr.

After all, it was, in fact, a clown -- technically, The Joker -- that was painted on the cleats that Beckham was asked to switch out of at halftime during the Browns' fourth straight loss. And the uniform mix-up also came during a season in which the 3-time Pro Bowl wide receiver has also caused controversy by wearing luxury watches and the wrong shade of visor tint during games.

Yet despite the supposed drama his notorious style has resulted in, Beckham made it clear on Thursday that he doesn't plan on conforming any time soon.

"I feel bad, but I really just don't care," Beckham said. "I don't want to get anybody else in trouble, but I see people wearing lime green in their cleats. No team in the NFL has lime green except Seattle.

"It's just stupid. Like, I really don't care. They're going to find a way to try to make me upset. And if you talk about cleats, then it's going to be a reflection of my character or whatever it is. But really, I just didn't have anything else to wear. So I'm going to wear whatever's the most comfortable. That's really it."

As Beckham explained to reporters in Denver -- and again on Thursday -- the mixup with his cleats on Sunday came as the result of the Browns' successfully petitioning the league to wear their all-brown Color Rush uniforms.  Having already planned his cleat lineup with Nike prior to the season, Beckham had accounted for the Browns to be wearing their white uniforms, and as a result, wasn't properly prepared with matching footwear.

But regardless of the legitimacy of Beckham's excuse -- be it with his cleats, watches, visors or pant length -- the 2014 NFL Offensive Rookie of the Year doesn't plan on changing his ways anytime soon. In his mind, there's always going to be something.

So at the very least, he might as well get to wear what he wants to when he can.