The six-game ban, stemming from domestic violence allegations made against him in Ohio last year, takes effect immediately. 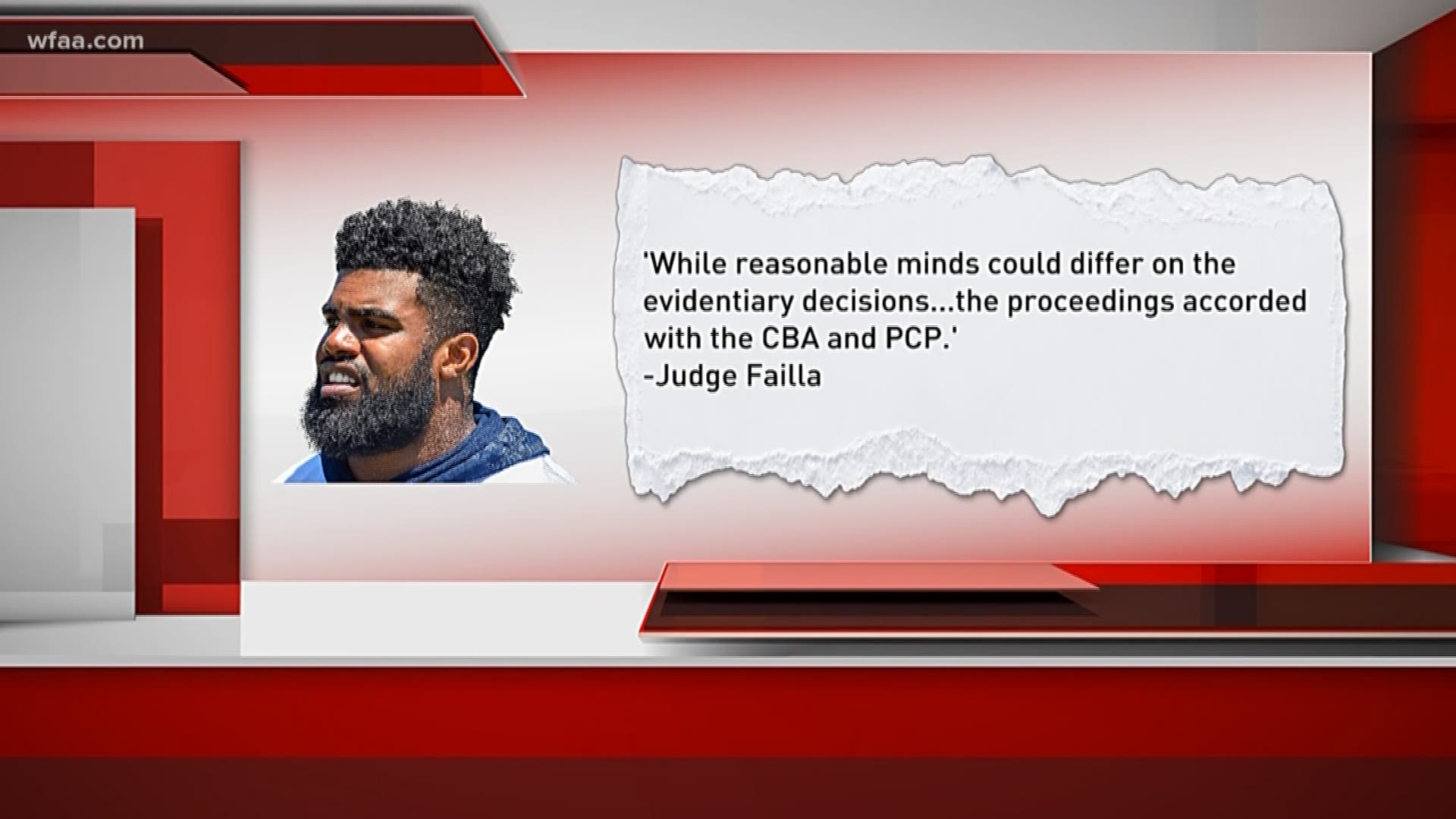 Cowboys running back Ezekiel Elliott is once again set to serve a six-game suspension after a New York judge denied his request for a preliminary injunction on Monday.

Judge Katherine Polk Failla, hearing the case after a fill-in judge granted a temporary restraining order on Oct. 17, ruled in favor of the NFL in a decision announced Monday night.

Failla's decision, which came down just before 9:30 p.m. Central Time Monday, states the NFLPA "fails to establish a serious question on the merits" of Elliott's case, saying NFL arbitrator Harold Henderson's initial decision to hand down a six-game ban was not fundamentally unfair.

It also states that the "irreparable harm" the NFLPA argued Elliott would suffer is "either speculative or deserving of a monetary award rather than an injunction."

Language from Judge Failla's decision on Zeke's "irreparable harm" -- calls it "speculative or deserving of $ rather than an injunction" pic.twitter.com/LTiBdceuR0

Elliott had been granted a temporary restraining order based on questions over fundamental fairness and irreparable harm.

Failla's decision refutes the NFLPA's argument that an injunction would be in the best interest of the public, saying "public interest weighs in favor of denying injunctive relief."

Judge Failla's ruling is on hold for 24 hours, to allow all parties to consider options to appeal. Elliott’s camp is likely to file another appeal in a 2nd Circuit court and start the process over.

For now though, the six-game ban, stemming from domestic violence allegations made against him in Ohio last year, is set to take effect immediately.

Failla heard roughly two hours of arguments Monday evening. Jeffrey Kessler represented Elliott, with Paul Clement arguing for the NFL. Failla said she had the “bones of the decision” by around 6 p.m. Central Time but needed time to add to the decision, according to sports law expert Pete Brush. Failla declined a request to rule from the bench.

Judge Failla declines Kessler invitation for her to rule from bench. She wants to add detail since whoever loses is heading for 2nd Circuit

Two weeks ago, Judge Paul Crotty granted Elliott a temporary restraining order. Crotty was filling in for Judge Failla, who was on vacation.

The NFLPA had rushed to the court in the Southern District of New York to file another appeal following a 5th Circuit court’s decision to reinstate the suspension. The case has moved on from that appeals court, though, as Elliott’s camp has elected not to request an en banc, or all-court, rehearing.

After Sunday’s win, Elliott said his camp felt “confident” the running back would play the balance of the 2017 season.

The second-year back has 900 yards from scrimmage and eight total touchdowns in seven games this year, including 353 total yards and five touchdowns in the two games since Crotty granted him a TRO.