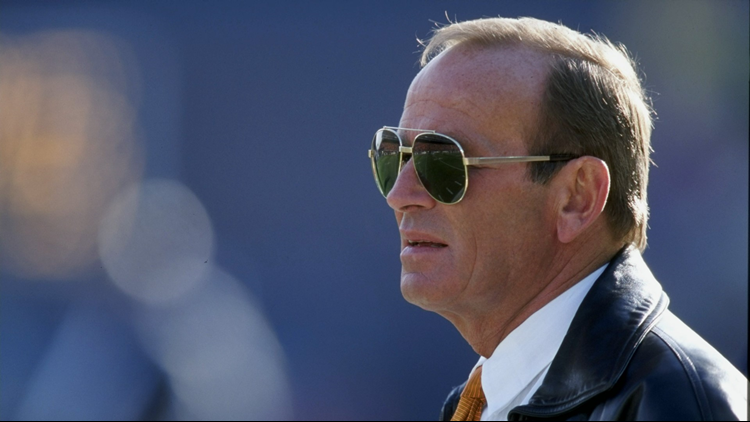 Photo by: Brian Bahr /Allsport
Denver Broncos owner Pat Bowlen looks on during a game against the San Diego Chargers at Mile High Stadium in Denver, Colorado on Dec. 21, 1997.

KUSA — Bill Bowlen, the brother of majority owner of the Denver Broncos Pat Bowlen, filed an objection over the weekend to the stay motion request by the Pat Bowlen Trust filed late last month.

In the objection filed in Arapahoe County Court , Bill Bowlen says the request for a stay would be a delaying tactic that would ultimately take the NFL years to rule on if it came to arbitration.

"Defendants’ Motion is nothing more than a delay tactic and attempt to interfere with the Court’s ability to decide important issues relating to Defendants’ misconduct," the motion reads.

RELATED | 'I am capable': Beth Bowlen Wallace on the Broncos and her own personal journey

Two weeks ago, the Pat Bowlen Trust filed a motion in court requesting a stay to Bill Bowlen’s lawsuit until the NFL determines whether to accept a request to arbitrate its Broncos ownership dispute with Beth Bowlen Wallace and Amie Bowlen Klemmer.

“We have requested that the NFL accept arbitration of this private family matter, per the league’s constitution and bylaws, and we have filed a motion to stay the legal proceeds pending this ruling,’’ Reilly said in a statement on behalf of the Pat Bowlen Trust. “The Trustees will continue to implement Pat Bowlen’s succession plan.’’

Pat Bowlen stepped away from an active role the team’s management in July 2014, acknowledging that he was battling Alzheimer’s disease. The Broncos were placed in a trust controlled by three people – Joe Ellis, the president and CEO of the team; Richard Slivka, the team’s executive vice president and general counsel; and Mary Kelly, an attorney. All three were longtime advisers to the Broncos owner.

Pat Bowlen’s wish was that the trustees would identify one of his seven children to succeed him as the team’s controlling owner.

Last spring, Beth Bowlen Wallace announced her intent to run the Broncos. She is one of two children from Pat Bowlen’s first marriage and has the support of the other, Amie Bowlen Klemmer.