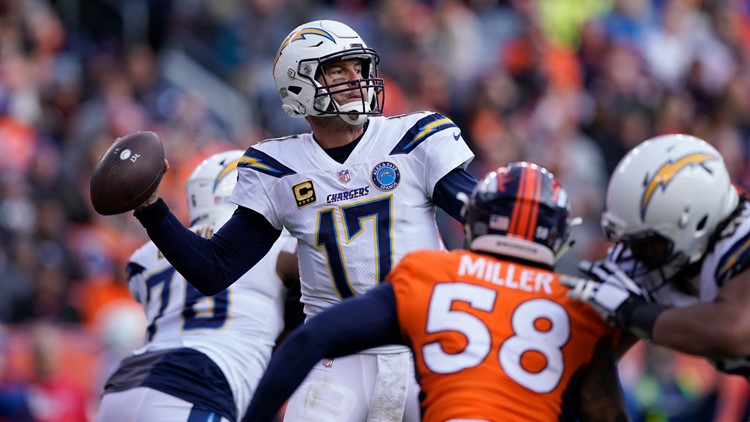 Photo by: AP
Los Angeles Chargers quarterback Philip Rivers throws a pass during the first half of an NFL football game against the Denver Broncos, Sunday, Dec. 30, 2018, in Denver. (AP Photo/Jack Dempsey)

Broncos vs. Chargers will never be the same: 'It will be weird not playing against Philip Rivers'

COLORADO, USA — It was never a Broncos-Chargers rivalry.

The rivalry was always the Broncos against Philip Rivers.

“That guy is a true competitor, man,’’ said Broncos’ veteran defensive end Derek Wolfe, who is about to become a free agent. “If I am with the Broncos, anytime you play the Chargers it will be weird not playing against Philip Rivers. It was so much fun to compete against him.’’

The Chargers announced they will not bring back Rivers in 2020, ending his 16-year term with the team that included 14 seasons as their starting quarterback.

“We had great battles, man,'' said cornerback Chris Harris Jr., another longtime Bronco heading for free agency. "Playing Rivers you just knew you had to bring your A game because he could throw the ball all over the field.”

The Rivers rivalry? Wolfe once told Rivers during a 2016 game that he was going to eat the quarterback’s kids.

“Yeah, but that was years ago,’’ Wolfe said Monday in a phone conversation with 9NEWS. “We won’t talk about that.”

Rivers played his first-ever NFL game against the Broncos. After sitting for nearly two full years, Rivers came off the bench to play in the 2005 finale after Gerard Warren jumped on Drew Brees’ shoulder, tearing his labrum. The Broncos won the meaningless game easily, but starting in 2006 Rivers and the Chargers dominated the AFC West series for the next five years.

The Broncos began 0-4 against Rivers and 2-9. But then came the Peyton Manning era from 2012-16 when the Broncos went 8-1 against Rivers' Chargers, including a playoff win.

Overall, the Broncos posted a 16-13 record against Rivers, who never missed a start once he took over for Brees 14 years ago.

The key for the Broncos was their pass rush. Rivers was woefully immobile, one reason why he never led the Chargers to the Super Bowl. But when he had time in the pocket, Rivers was one of the game’s purest passers.

“He got the ball out fast,'' Harris said. "He knew what everybody was doing on the field.

Von Miller has 16 of his 112.5 career sacks (counting postseason) against Rivers, more than any other quarterback. Alex Smith, the former Chief, is Miller’s second-most sacked quarterback with 8.

The Broncos sacked Rivers 67 times in 29 games, more than any other opponent. In all, Rivers threw 46 touchdowns against 30 interceptions (Harris Jr., who would often go jaw-to-jaw with Rivers during the heat of competition, had 4 of those picks) and a mediocre 87.8 passer rating against the Broncos.

Rivers, though, was more than numbers. He was also about his mouth. There has never been a more voluble smack-talker among Broncos’ opponents.

“He always talked smack and that made me play even better just because of all the junk he would say to you if he did beat you,” Harris said.

Rivers as Broncos’ Enemy No. 1 began on Christmas Eve, 2007, when national television cameras caught him taunting Broncos quarterback Jay Cutler late in an easy Chargers' win. The cameras missed what stoked Rivers and his teammates -- Cutler grabbing his unmentionables while staring down the Chargers on the sidelines.

But no matter. Rivers and his whiny facial expressions and constant in-game chatter made him Broncoland's favorite guy to dislike.

“He was always trying to get a flag, somehow,’’ Wolfe said.

“I’ll never forget when I picked him off I think my first time (starting) against him (in 2012) in San Diego,'' Harris said of the Broncos' comeback from a 24-0 deficit to defeat the Chargers, 35-24. "We crossed paths on the field and he said, “Go back to Arkansas.’ He was wrong. He didn’t know where I was from.”

Rivers did not play well in 2019, throwing three of his 20 interceptions while losing both games against the Broncos. He wants to play for two more years, but it won’t be for the Chargers. Tampa Bay, Miami and Tennessee are on the Broncos' home schedule in 2020, in case Rivers signs with one of those non-AFC West teams.

“I think he has a year or two left him in, probably,’’ Wolfe said. “If you’ve got that competitive spirit and your body’s not giving out on you, you’re going to keep going.

“He had some tough sledding these last couple years, going from San Diego to L.A. It was kind of a disaster (with the lack of Chargers fan base). I think he deserved better. Imagine Philip Rivers in Denver for 15 years. It would be a whole different story for him.’’

RELATED: Broncos running back Phillip Lindsay is going to be a dad