The small-college center became a draft day cult hero who is using platform to help young girl with rare disease. 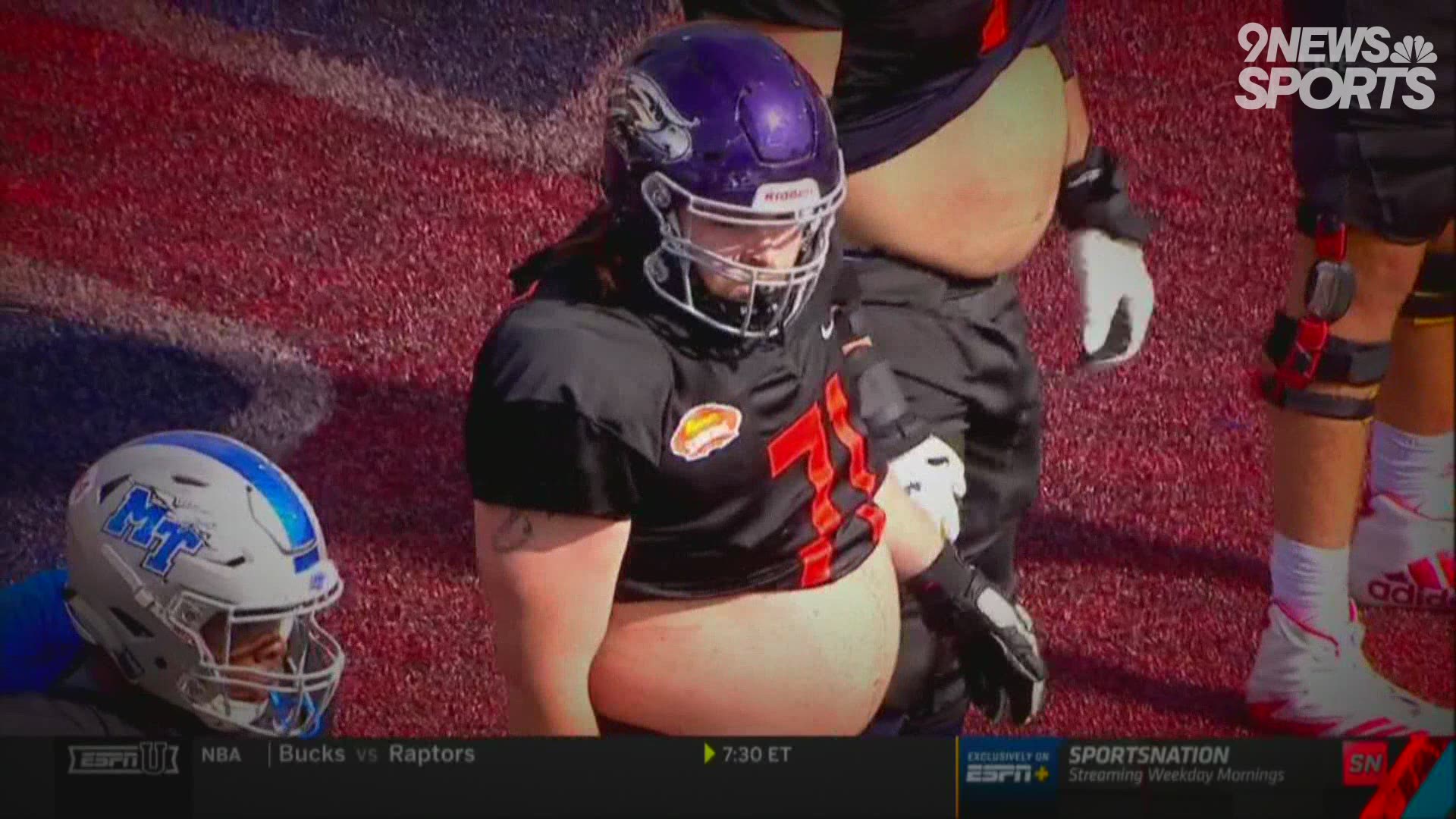 DENVER — The tree could not have known it had no chance.

As a video camera rolled a fictional billboard could have proclaimed, The Belly vs. The Tree.

The matchup was a couple years ago, on a small Canada island where offensive guard Quinn Meinerz was resourcefully working out for his upcoming 2019 Division III Wisconsin-Whitewater football season.

The video, shown to a vast NFL Draft Day 2 cable-TV audience on April 30, had the bulky Meinerz in the midst of a wooded area hoisting stacks of cut lumber above his left shoulder, gas tanks while running up a flight of wooded stairs. He squatted a logs. There was bench-pressing of a conventional weight-lifting bar loaded with large metal plates.

The highlight was a clip of Meinerz getting in a three-point blocking stance in front of tree, then shuffling forward before unloading a two-hand shiver on a poor solitary stump of timber.

The Belly, Meinerz’ nickname, took on The Tree, and The Belly won. Now it can be told why the tree couldn’t have realized it had no chance

"Those trees were dead as a doornail," Meinerz said during a Zoom interview last week with 9NEWS. "They were gone. The main part of that video was to have something comedic for people to laugh at and entertain people and I think it did do that. I was just using the techniques we used at Whitewater where we’d take two strides and strike.

"I wanted to use trees, and also dead trees. I thought, what if I pretended it was a linebacker, go up to the second level and hit it as hard as I can, what’s going to happen? And then it tipped right over and it was just awesome for the video. It was just  being creative and using the resources I had up there."

> Watch Mike Klis' full interview with Quinn Meinerz on Overtime, airing at 10:35 p.m. on 9NEWS this Sunday, May 9.

The wilderness workout video, along with his Belly of the Beast T-shirts that feature his animated likeness, made Meinerz an instant celebrity after his name was called as the Broncos’ No. 98 overall pick in the third round.

"It’s been absolute madness," Meinerz said. "That’s the only way to really put it. But I really don’t enjoy the spotlight so I’m slowly trying to get used to it."

A friendly, easy-going fella with a hearty laugh and not afraid to use it, Meinerz is preparing for the serious business of the Broncos’ rookie minicamp that will be held this Friday, Saturday and Sunday. And then he’ll join the veteran players for Phase II of the Broncos’ offseason program the following Monday, May 17. Not all vets will be there and they’ve asked the rookies to not show up at the Broncos’ facility either.

Sorry guys, but skipping out on the team’s offseason program is simply not practical for the new guys.

"I’m a rookie. I’ve got to learn a lot of things," Meinerz said from his Whitewater apartment. "There’s no messing around. I’ve got to get in there and start learning and being a sponge."

From unknown to No. 1-rated center prospect

Although he played guard in college, and was a Division III All American at the position, he’s been projected at the NFL level as a center. After the fall football season was called off for Whitewater, Meinerz played his new position for the first time in January at the Senior Bowl in Mobile, Ala. He came away as the No. 1-rated center prospect for the NFL draft.

Still, it was mildly surprising the Broncos took a center from Division III Whitewater in the third round when just last year the team took center Lloyd Cushenberry III from the undefeated, national champion LSU Tigers in the third round. Cushenberry delivered every offensive snap last year. And he’s already going to get serious competition in his second year from a small school center convert?

To be sure, Meinerz isn’t going to defer by concentrating on the center position’s physical and mental techniques first, while worrying about competing against Cushenberry later.

"No, I think if you don’t come in with the mindset of competing you’re doing yourself and your team a disservice," Meinerz said. "I’m going to form a great relationship with Cushenberry, but at the same time we’re going to be competing and pushing each other to reach a new level of football. I think that’ll only help us. That’s what I’m mostly excited about.

"With the best offensive line coach in coach (Mike) Munchak, I’m excited to learn from him and to push that room to another level. I think the mentality of just hanging around and learning is wrong. I want to be able to come in there and compete right away and if I can start, that’s awesome, or I want to be that next person. I want to be that sixth person maybe if I can’t be one of the five."

For his trip to Denver, he should make sure to pack a Belly of the Beast T-shirt or ten. Meinerz said he doesn’t like the spotlight, but he has embraced it for the sake of Alaina Shelsta, the 14-year-old daughter of his high school offensive line coach Paul Shelsta. Alaina has been battling a rare genetic disorder that disrupts the delivery of glucose to the brain. So rare, Alaina reportedly is one of only 300 people in the world with the disease.

To help, Meinerz took advantage of his platform at the Senior Bowl.

"It meant a lot to me to get invited to that," Meinerz said. 'I’m a big goal setter. I set a lot of short-term and long-term goals and one of my long-term goals was to get invited to the Senior Bowl. That was huge. If I don’t go there I’m still an unknown person and we’re probably not talking. (laughs). It meant a lot and to learn a new position on the spot there and then to be considered the best at it, you know, after learning it very quickly it’s all unbelievable and I’m really glad I was able to get invited there and also prove to everyone and prove to myself that I could hang around these guys and the level of competition wasn’t going to be an issue for me."

'It started right after the Senior Bowl where there were pictures of me with my belly hanging out," Meinerz said. "The idea of the shirt was to find a way to raise money for a friend of mine (Shelsta) back home. My cousin Nick came up with the design and I really liked it and we said, ‘All right, let’s put it on a shirt, let’s sell it and all the proceeds go to Alaina.’ It really has taken off. And then, yeah, we have the orange version too for Broncos Country in case they want to grab one."

Paul and his wife Christine Shelsta are both coaches and pillars in Meinerz’ hometown of Hartford, Wis., where Alaina’s fight is woven into the community spirit.

"I knew the level of stress that was happening with that family because of what Alaina was going through," Meinerz said. "Constantly in and out of the hospital, she’s one of a couple hundred people who have this disease and she’s always trying to learn new things and going through struggles. She’s been an inspiration to me and I wanted to find a way to give back to someone who has meant so much to me and has been so instrumental to my career. It’s been really amazing to turn the following I’ve had and turn the attention on to her."

The famous Canada workout, as Meinerz refers to it, became necessary after he ballooned 20 pounds of bad weight by the end of his 2019 season. After drafting him last week, Broncos’ general manager George Paton said the Meinerz version of two years ago had a "neck roll."

"Yeah, there was a huge body transformation I had to go through and that was part of my process this last year to really revamp who I am as a person and as a football player," Meinerz said of the drop from 340 pounds to 320. "There was definitely a lot of bad weight that I had at the end of the 2019 football season. It’s not an excuse but it’s partly because the D-III football diet isn’t the greatest (laughs). Our budget only allows for so much."

"Yeah, it’s pretty much that," he said. "The D-III diet in the playoffs for us, we were eating Golden Corral and then our night-time snack was Dominos. So I put on a lot of bad weight and had to work really hard this last year to really fine-tune my body composition."

By the way, just because he grew up in Packers Country doesn’t mean he’ll offer his opinion as to whether his new bosses should go after disgruntled quarterback Aaron Rodgers.

"Hey, I’m in on whatever decision the coaches make for Denver," Meinerz said. "At the end of the day my job is going to stay the same. Snap the ball and block people in front of me. My family back home, I think we’re all Broncos fans right now."

Just about everybody back home, and across the Rocky Mountain region and national football landscape is a Meinerz fan now.