Emily Zaler became the first-ever full-time female coach with the Denver Broncos in 2020 when she was promoted from the NFL Bill Walsh Diversity Coaching Fellowship. 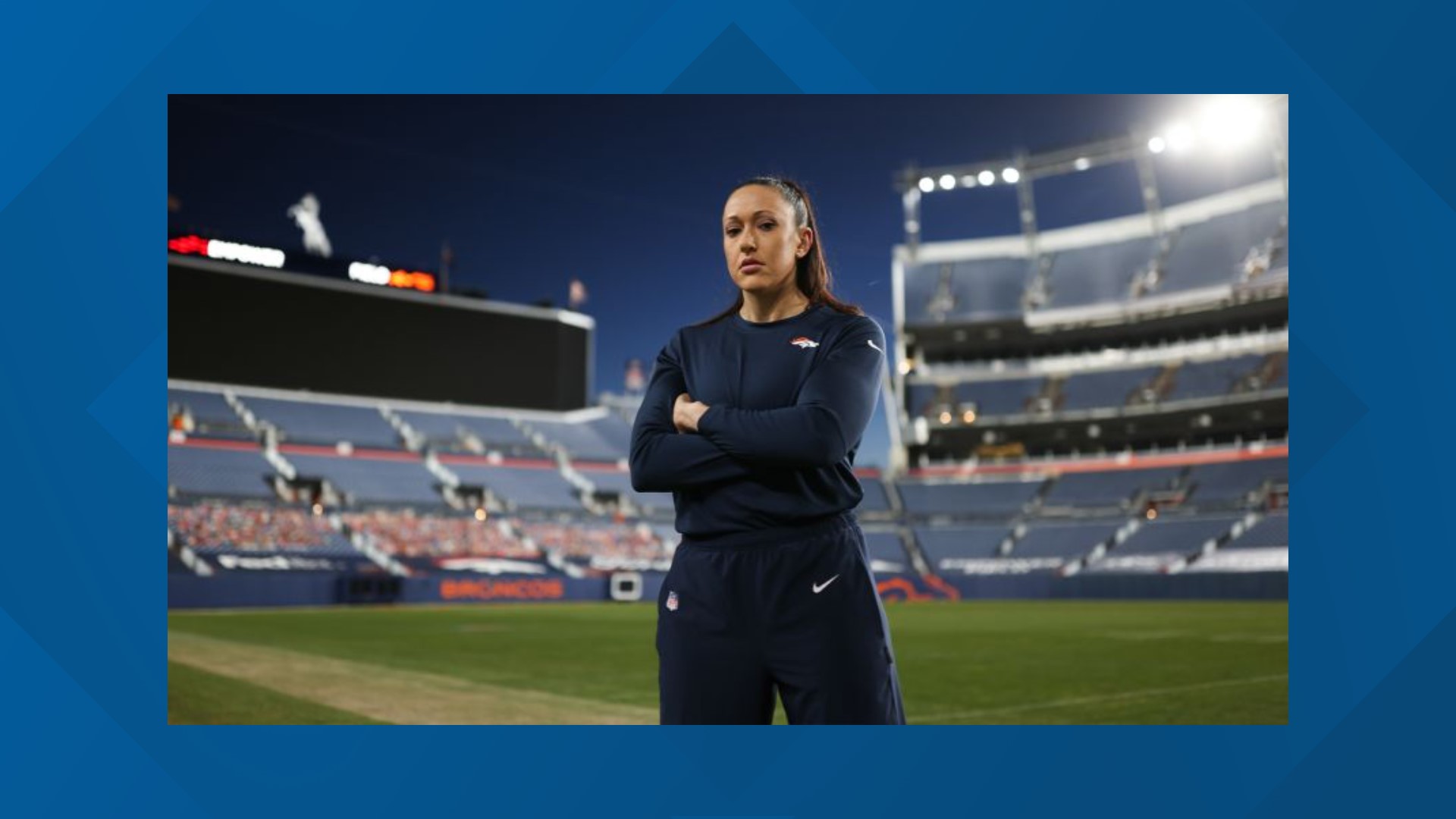 DENVER — The faces in the NFL are starting to look a bit different, and that's a good thing. Eight women were hired as full-time coaches this season throughout the league.

Emily Zaler is in a historic position as the Broncos' first-ever full-time female coach. Before earning her role as an assistant strength and conditioning coach, Zaler was a recipient of the Bill Walsh NFL Coaching Diversity Fellowship, a crucial internship program used to help women and people of color access leadership positions in the league.

"It's not only critical to allow minority coaches as well as women the opportunity to experience living out their dream of coaching within the National Football League, but it also sets a platform for other minorities and other women to see that it is possible to do this," she told 9NEWS.

The internship set the platform for her future with the Denver Broncos. After the final practice of training camp, Zaler thought she was heading home, but instead was offered a full-time role as an assistant strength and conditioning coach.

"It's truly a surreal feeling, is the best way to describe it, because it's living out a dream that I was told wasn't going to be possible for me. To have an organization like the Denver Broncos be so welcoming and so open to the idea of bringing me on and it doesn't matter if I'm male or female but just welcoming me as a coach," she said. "On a day to day basis, my role looks just like any other strength and conditioning coach. We're in the trenches, whether that means lifting sessions and conditioning sessions, warmup pre-practice and warmup pre-game. Whatever the responsibility is and anything we can do to assist their performance on the field, we're more than happy to do that for them."

This is Zaler's second stint in professional sports. She previously worked in strength and conditioning with the New York Knicks in 2019-2020 before the coronavirus pandemic shut down the season for months.

Work in any sports league was sparse during the height of the pandemic, but Zaler applied for the fellowship after seeing other women successfully coaching in the league.

"I know there were eight female coaches within the National Football League, as well as women across other sports. It provides such a great vision for those little girls to see us and know that this is possible," she said. "Looking at two women that just won the Super Bowl, coach Lori Locust and MJ [Maral Javadifar] with the Buccaneers, they were two women that allowed me to see it."

Seeing women at any level of football, would have been life-changing for Zaler.

"As a kid, I was a tomboy and I was definitely the girl who played football in the neighborhood with the boys and played football at recess with the boys. Not to age myself, but at the time, there weren't any opportunities for girls to play football," she said. "I ended up playing soccer at the collegiate level for the University of Oregon and for the University of Missouri, and it was during my time as a collegiate athlete that I fell in love with strength and conditioning and knew that it was what I wanted to do with my life."

Had football been available to her as a varsity sport, Zaler says she would have pursued that instead of soccer.

"Absolutely, football was one of my first loves, again playing with the boys at recess and in the neighborhoods. If I had the opportunity to play varsity flag football, 100 percent."

That's why she's helping to launch a joint-initiative from Nike and the NFL to grant up to 5 million dollars to high school programs throughout the country for girls varsity flag football. State organizations that currently have flag football are already eligible for 100 thousand dollars to use for equipment.

"This initiative with Nike should open numerous doors. More and more girls will get involved with the sport of football and realize that football is female and it's not just a male sport," Zaler said. "Whether they want to play at a collegiate or professional level or whether it inspires them to want to coach within the NFL when they're an adult and done with their playing days, it just opens up so many more doors and encourages more women and girls to get involved in the sport."

As one of the few women in powerful roles in the NFL, Zaler feels a personal responsibility to show other women that their dreams are attainable.

"I think it's an incredible responsibility for myself, as well as the other women who have been given this opportunity, to set an example for little girls and for other women to be that vision and to show them that persistence and hard work and belief in yourself that anything really is possible," Zaler said.

RELATED: Pros and cons of Broncos' Drew Lock and other QB possibilities