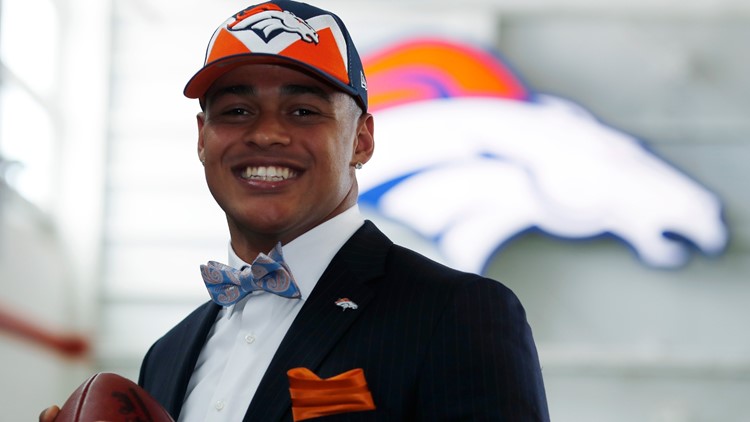 Photo by: AP
Denver Broncos' first-round selection in the NFL Draft, Noah Fant, a tight end out of Iowa, poses for a photograph after a news conference at the team's headquarters Friday, April 26, 2019, in Englewood, Colo. (AP Photo/David Zalubowski)

It was before Patrick Mahomes II and before Tyreek Hill that the Kansas City Chiefs wrested AFC West dominance from the Broncos.

The one constant during the Chiefs’ current seven-game winning streak against the Broncos: Tight end Travis Kelce.

The Broncos haven’t been able to cover him. In Kelce’s last five games against the Broncos, he has averaged 8 catches for 110 yards. He has a touchdown in each of his last four games against Denver.

It was actually during the Broncos’ Super Bowl 50-winning season of 2015 when the Chiefs made their move. The Chiefs nearly won the first meeting that year, but Broncos’ legendary quarterback Peyton Manning had one more 2-minute drive in him. And then Bradley Roby’s scoop-and-score off a Jamaal Charles’ fumble gave the Broncos an improbable win at Arrowhead Stadium.

The Chiefs won the rematch later that season at Mile High Stadium, embarrassing the wounded Manning with four interceptions – and haven’t lost to the Broncos since.

Even when the Chiefs sent out their B squad to mop up the 2017 season, the Broncos couldn’t beat them. The Chiefs’ reserves in that game included Mahomes, who made an impressive NFL debut.

Going forward, there wasn’t much chance for the Broncos to match pass for pass with the sensational Mahomes. And the only guy who can stop the speedy, talented Hill is Hill himself.

But by using their first-round pick in the 2019 draft on Iowa tight end Noah Fant, the Broncos hope they can soon match up to the incredible coverage mismatch that is Kelce.

The 6-foot-4, 249-pound Fant has uncommon speed for a player of his size, a quality evidence by his 18 touchdowns during his sophomore and junior seasons that led all college tight ends.

With the Broncos reporting to training camp Wednesday and holding their first practice Thursday morning – one week from today – 9News wraps up the offensive side of the Broncos’ roster preview by breaking down the tight end position.

In recent years, the Steve Antonopulos-Vince Garcia training room has been occupied with a larger percentage of tight ends than any other position.

Providing they can get some overdue luck with health, the Broncos figure to carry four tight ends on their 53-man roster: Jeff Heuerman, Troy Fumagalli, Jake Butt and Fant.

In past three seasons, Broncos tight ends ranked fifth worst in catches (171), sixth worst in yards (1,897) and were tied for third-worst in touchdowns (10).

The Chiefs with Kelce are No. 1 in tight end receiving yards with 4,120 over the past three years.

Meanwhile, the Denver defense is third-worst in tight end receiving yards allowed (2,997) over the past three years.

Is it any wonder the Broncos used their first-round draft pick on Fant?

Heuerman was having a breakout year in his fourth season in 2018 until fractured ribs and a bruised lung caused him to miss the final five games. Still he had 31 catches and blocked well in 11 games.

He was rewarded with a two-year, $8 million contract in March that will pay him $4 million this year. It may take the better part of this season before Fant is ready to become an every-down tight end as while he is a superior receiver, his blocking needs work.

Butt and Fumagalli. Butt had eight catches for 85 yards through the Broncos’ first three games, then suffered a torn ACL in practice during week 4. He missed his rookie season of 2017 to recover from a torn right ACL suffered in his senior bowl game with Michigan.

Butt didn’t participate in team drills during the offseason although he should be ready for limited 11-on-11 reps at the start of training camp.

Fumagalli, a fifth-round pick last year out of Wisconsin, missed his rookie season because of sports hernia-related issues.

Butt. Everybody loves the guy but he hasn’t been able to catch many breaks in recent years. It’s no secret Fant was drafted for the position Butt was playing until he got hurt last season.

How far can an athlete playing at the highest level recover from ACL surgeries on each knee within the last three years?

Something else: How much quarterback Joe Flacco throws to the tight end. When Flacco was with Baltimore, he loved throwing to the tight end likes of Dennis Pitta, Todd Heap, Ed Dickson and Owen Daniels.

And anyone who watched San Francisco’s George Kittle destroy the Broncos in the first half in game 13 last year knows how much first-year Denver offensive coordinator/former 49ers’ quarterbacks coach Rich Scangarello values the tight end.

It’s not a stretch to say Heuerman and Fant will compete for the starting job in the base offense –with Heuerman the clear favorite – while Butt and Fumagalli will battle for the No. 3 tight end role.

Teams often carry just three tight ends on their 53-man roster but the Broncos have invested significantly in each of their top four.