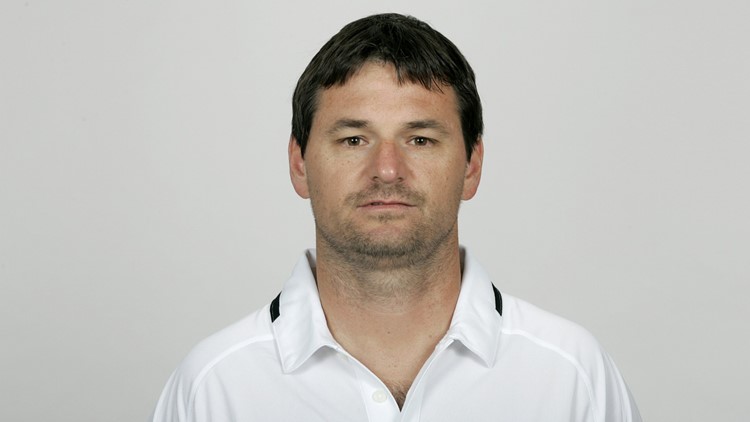 Photo by: NFL
Rich Scangarello poses for his 2009 NFL headshot at photo day in Oakland, California.

Scangarello, 46, coached quarterbacks for the 49ers the past two years. He is interviewing for the Broncos’ offensive coordinator position that remained open after Gary Kubiak walked away because of disagreements regarding assistant coaches and overall scheme.

Although he only has four years of NFL assistant coaching experience, Scangarello (Scain-guh-REL-o) also worked four years as an offensive coordinator for two small-colleges (Northern Arizona and Wagner), where he began studying Kyle Shanahan’s offensive tendencies from afar.

Scangarello saw that he and Shanahan shared the same West Coast running game principals. But it was Shanahan’s passing game concepts that led Scangarello to taking a low-paying assistant job with the Atlanta Falcons in 2015. Shanahan was the Falcons’ offensive coordinator who didn’t know Scangarello until they worked together that season.

Scangarello then became Wagner’s offensive coordinator for a year, before rejoining Shanahan’s staff with the 49ers in 2017.

Scangarello shares the same agent as Broncos head coach Vic Fangio, which is how he initially got on Denver’s radar. He also fit with Broncos general manager John Elway’s offseason goal of pairing the 32-year NFL defensive coaching veteran Fangio with a younger offensive coordinator familiar with the innovative, college offensive systems.

The way it often works in the NFL's offseason hiring cycle is coaches are hired before the interview. But one subject Fangio and Scangarello figure to discuss is the potential of the Broncos adding Mike Munchak as offensive line coach. Munchak spent the past five seasons coaching the Pittsburgh Steelers’ offensive line. He finished second to Fangio for the Broncos’ head coach position.

The Steelers would like to keep Munchak, but his contract has expired. While he grew up in Pennsylvania, he also has a daughter and grandchild who live in the Denver area. Would Munchak’ s blocking principals marry with Scangarello’ s zone-blocking scheme?