Two of Pat Bowlen's daughters alleged he was mentally incapacitated when he set up the trust to pick the team's next leader. 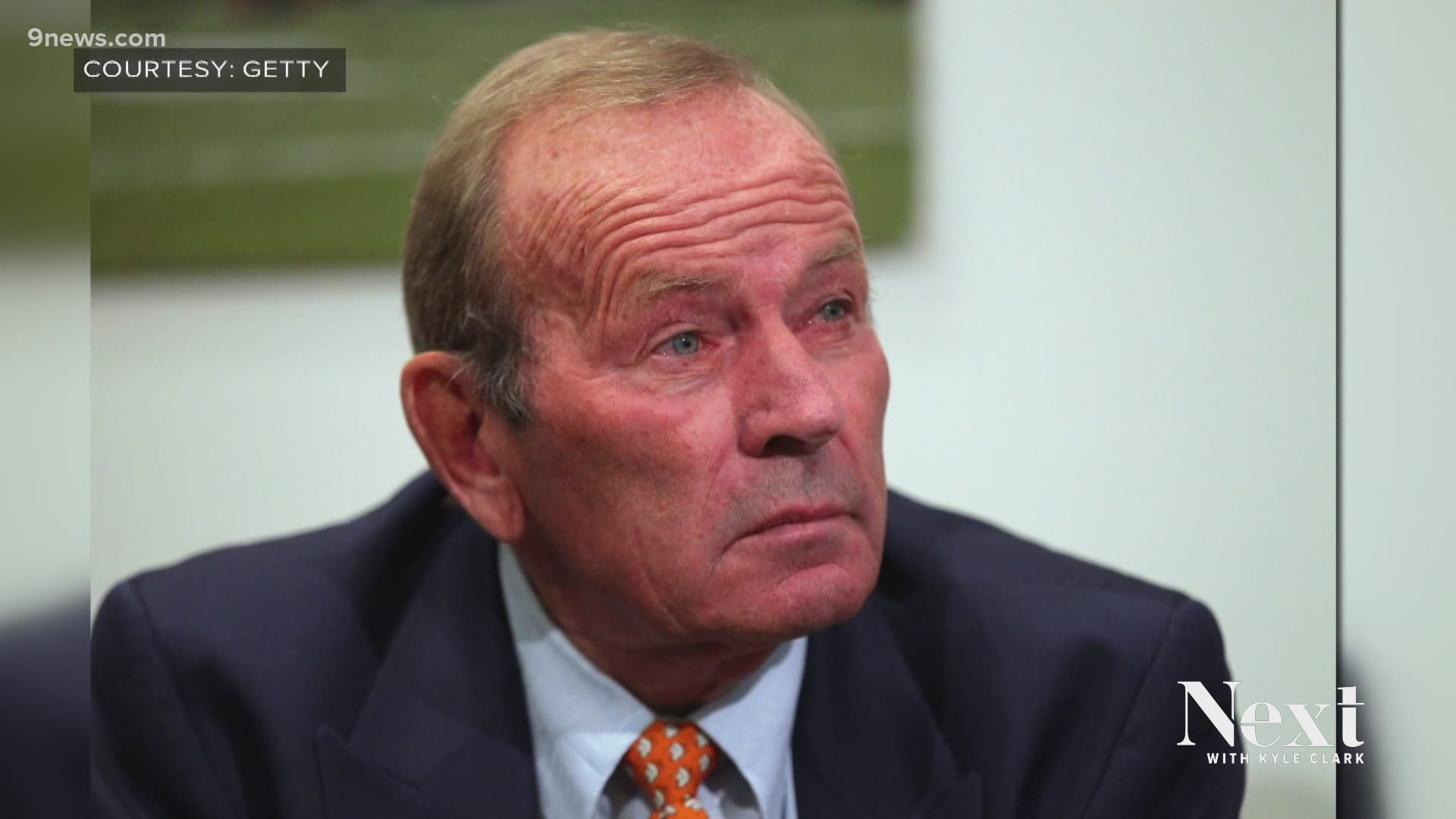 CENTENNIAL, Colo. — The four-week trial to determine the future ownership of the Denver Broncos is off – vacated Tuesday after a joint motion filed by both sides, 9Wants to Know has learned.

It was not immediately clear whether a settlement had been reached – or whether it could signal that the team could be sold.

Team President Joe Ellis and attorneys for the two sides all responded to questions from 9NEWS with the same two-word answer: “No comment.”

All documents in the case are suppressed, meaning they are not publicly available.

Ellis and two others, Rich Slivka and Mary Kelly, form the trust that has controlled the team since longtime owner Pat Bowlen stepped away from an active role with the Broncos in 2014 after announcing he’d been diagnosed with Alzheimer’s disease. He died in 2019.

The trial had been scheduled to start July 12.

Amie Bowlen Klemmer and Beth Bowlen Wallace – Pat Bowlen’s two children from his first marriage – argued in the suit that their father did not have the mental capacity to understand his estate planning documents and was under undue influence to sign them in 2009. It is those documents that set up the trust and gave it the power to decide the team’s future ownership.

That could have included naming one of Bowlen’s children as the team’s controlling owner – or selling outright one of the NFL’s premier franchises – and Colorado’s most popular, and valuable, professional teams.

A ranking earlier this year by Forbes estimated that the Broncos are worth $3.2 billion – making the team the 11th most valuable NFL franchise and, in a tie with the NBA’s Boston Celtics, the 25th most valuable sports franchise anywhere in the world. With an estimated worth of $5.7 billion, the Dallas Cowboys were listed first both in the league and among all sports franchises in the world.

The controlling owner has decision-making power and is, in effect, the public face of the team.

Beth Bowlen Wallace, 50, made it clear in 2018 that she believed she was qualified and ready to take control of the team. The trust, however, has signaled repeatedly that it supports Brittany Bowlen, 31 and one of Pat Bowlen’s five children with his second wife.

By any measure, Pat Bowlen’s 35 years of ownership were stunningly successful – the team won just shy of 60% of its games, claimed 13 division titles, and had as many Super Bowl appearances – seven – as losing seasons. All of it was capped off by Super Bowl wins after the 1997, ’98 and ’15 seasons.

But by the time that last championship season rolled around, Pat Bowlen had stepped away from an active role with the Broncos. Klemmer and Wallace contended in the suit that their father was already suffering from the progressive neurological disease when he signed the documents creating the trust.

In the void left by his illness and death, the struggle to chart the team’s future has played out largely behind the scenes and through carefully worded public statements.

“There is substantial and overwhelming evidence that Mr. Bowlen lacked the required capacity in 2009,” Giovanni Ruscitti, the lawyer representing Wallace and Klemmer, said in a statement when the petition was filed on Sept. 13, 2019. “As a result, Ms. Klemmer and Ms. Wallace have filed a petition asking the court to decide that issue, the related issue of whether the 2009 trust — which is the document under which the trustees have derived their power and authority — is valid, and whether Mr. Bowlen was subjected to undue influence.”

Dan Reilly, the lawyer for the trustees, released the following statement after the daughters filed that 2019 petition:

"It is sad and unfortunate that Beth Bowlen Wallace and Amie Bowlen Klemmer have elected to contest their father’s plan and attack his personal health. This complaint represents the latest effort in their public campaign to circumvent Pat Bowlen’s wishes.

"The evidence in the courtroom will show Pat Bowlen was fully capable of establishing and understanding his trust and estate plan when it was created in 2009. Mses. Wallace and Klemmer’s current position about their father’s supposed mental incapacity in 2009 was not raised by them or their lawyers until after 2014, when Ms. Wallace was privately told by the trustees that she was not capable or qualified to serve as controlling owner.’’

RELATED: Broncos' Ellis on Brittany Bowlen rejoining team: 'She’s got to roll up her sleeves and work ... that's what (her dad) wanted'

Besides their roles as trustees, Ellis is also the Broncos’ chief executive officer and president and Slivka serves as the team’s executive vice president and general counsel. Mary Kelly previously served as Pat Bowlen’s personal attorney.

The trial had been originally scheduled for last September before being delayed because of COVID-19 restrictions.

Even before the petition was filed, it was clear that within the family and the trust there was disagreement about who should be tapped to run the team.

Beth Bowlen Wallace took the preemptive step of announcing through a press release on May 31, 2018, that she was ready to take control of the team.

“It is my desire to lead this team with the same passion my father did and help the Broncos become Super Bowl champions again,’’ Wallace said in that release. “I have the ambition, experience and drive, and my mentor in running a winning NFL franchise is the best in the business – my father.”

The trustees then responded with their own statement later that day that read in part: “As trustees honoring the clear wishes of Pat, we have thoroughly evaluated whether Beth is capable of succeeding her father as controlling owner. We have determined that she is not capable or qualified at this time.’’

At the same time, the trustees sent multiple strong signals that Brittany Bowlen is the child they had identified to one day replace her father as controlling owner.

RELATED: Lawsuit that could impact Broncos future ownership moves ahead after ruling

Ellis has previously stated the trust’s succession plan that includes identifying a new controlling owner would require unanimous approval among the Bowlen family – and that without that the team would be put up for sale.

“I would add from a timeline perspective that the community, the fans, the organization, and the beneficiaries – the family – deserve resolution at some point. Right now we’re focused on the trial and we’ll go to court. I believe we’ll prevail but we’ll see and we’ll go from there. Again, I think it’s important to so many different parties that this gets worked out sooner rather than later.‘’

Bowlen bought the team in 1984 and ran it until the Broncos and his wife, Annabel, announced in July 2014 he had been diagnosed with Alzheimer’s. He stepped away from the team and out of public limelight, struggling with the illness in private. He was inducted into the Pro Football Hall of Fame in Canton, Ohio, on Aug. 3, 2019 – less than two months after his death. Klemmer and Wallace attended the ceremonies as did four of the five children Pat had with Annabel, including Brittany.