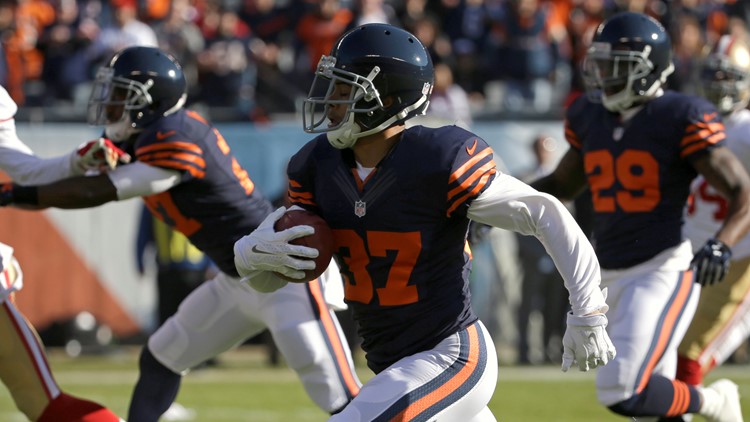 Photo by: AP
Chicago Bears' Bryce Callahan (37) returns a punt during the first half of an NFL football game against the San Francisco 49ers, Sunday, Dec. 6, 2015, in Chicago. (AP Photo/Nam Y. Huh)

Bryce Callahan: 'The Broncos were always my top pick' because of Fangio and Donatell

They were once known as the No Fly Zone.

Suggesting a new name for the Broncos' secondary: Simmons and the Smurfs.

The Broncos continued to stack up on smaller, if strong-tackling cornerbacks who are especially adept at playing the slot by signing Bryce Callahan to a three-year, $21 million contract. He played the previous four years with the Chicago Bears' where his defensive coaches were current Broncos head coach Vic Fangio and defensive coordinator Ed Donatell.

"There were a couple teams involved in the second wave of free agency," Callahan said in a conference call Saturday morning with Denver media. Callahan was being driven by a Broncos employee from his new team headquarters to the airport as he took questions. "But the Broncos were always my top pick, just because of Fangio and Ed are over here. I feel comfortable in their system. I've been with them a couple of years. I won't have to be learning a whole new system. I can just get in and go.

"And, Denver's a nice place. I have a couple of friends who played for the Broncos and they had nothing but good things to say. It was really a hard decision."

Through the first two waves of free agency, it's clear Broncos general manager John Elway likes height at quarterback, but not cornerback. The Broncos' top three cornerbacks are Chris Harris Jr. (5-foot-10), Kareem Jackson (5-10) and now Callahan (5-9). All have been known to play the slot -- or inside corner position where all the action is -- in passing situations.

The Broncos' other starting defensive back is safety Justin Simmons, who is 6-2 and can jump over offensive linemen.

The Callahan signing means Jackson will play safety as well as corner and Harris will stay on the outside corner position during nickel situations, which is his preference.

"I know we're all versatile guys who can play inside and outside," Callahan said. "I feel like the coaches will work it out."

Callahan will help Fangio and Donatell set their defense. All three were together with the Chicago Bears the previous four years.

Callahan has appeared in 45 games with 29 starts during his four seasons with the Chicago Bears. Not bad for a player who was undrafted out of Rice in 2015. He is coming off a foot injury that forced him to miss the final three regular-season games and the Bears' opening-round playoff loss to Philadelphia.

Callahan's career totals include 122 tackles, four sacks, four interceptions, 20 passes defensed and one forced fumble. He played the second-most snaps per game in slot coverage in 2018, according to ProFootballFocus.com.

The addition of Callahan comes four days after the acquisition of free agent cornerback/safety Jackson, formerly of the Houston Texans.

In a span of five days, the cornerback position went from the Broncos' most glaring weakness to arguably its No. 1 strength. The Jackson-Callahan additions also means the Broncos almost certainly will not choose a cornerback with their first-round pick, No. 10 overall, in the NFL Draft next month.

RELATED: Lawsuit that could impact Broncos future ownership moves ahead after ruling

RELATED: Joe Flacco to show commitment to Broncos by moving his large family to Denver