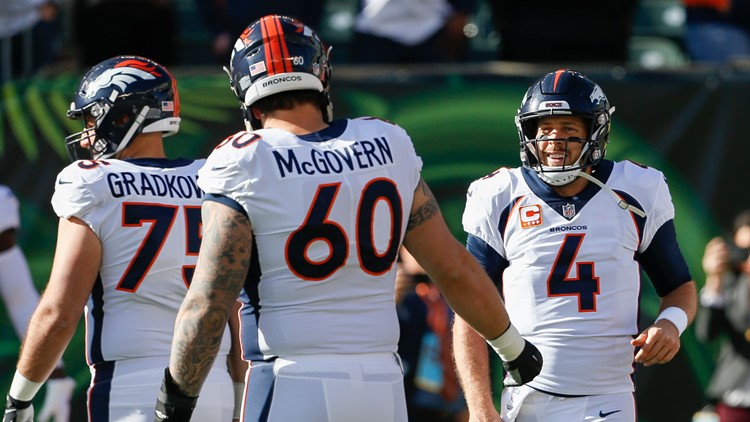 ENGLEWOOD, Colo. — Through his first three years with the Broncos, Connor McGovern said little if anything at all.

Here in year 4, McGovern is not only the offensive lineman with the greatest Broncos seniority, he stepped up at his OTA press conference Thursday with the prerequisite Alpha attitude of a center who is ready to lead.

“I’m not the oldest guy in the room, but I’ve been in that room the longest," McGovern said. “It is a little weird and it’s to the point where guys are kind of like, ‘Do we have meetings?’ I’m like, ‘Shoot, that’s my job.’ I have to go ask coach if we’re going to meet early or meet later. That is a different thing. Everyone is looking at me because I’ve been around the building the longest. … It’s been a little bit of a shift because I used to be the one asking people that and now I have to find those answers out and help the other guys. It’s fun. I enjoy being center in that aspect of the job.”

We should have been talking to this guy earlier. McGovern didn’t play a down as a rookie, then started the final five game of the 2017 at right guard. He was a right guard against last season until he replaced the injured Matt Paradis at center for the second half of the season.

The center is a take-charge, cerebral position and during his presser Thursday, McGovern was confidence and insightful.

They must make ‘em interesting at Missouri. McGovern was a senior there when another impressive young Bronco, second-round quarterback Drew Lock, was a freshman.

“That’s a totally different player," McGovern said of Lock. “When he was a freshman at Missouri, he was coming in behind a pretty decorated player (Maty Mauck). (Lock) knew, or so he thought, that he was going to have a year to kind of figure college out. Come in, learn the ropes, learn what college football is all about, especially in the SEC.’’

And then Mauck was suspended for the third time in four months. Lock was the Tigers’ starting quarterback as  a true freshman.

“Some stuff happened and he obviously didn’t get that opportunity,’’ McGovern said. “He got thrown to the wolves a little bit, but he overcame it. I think that is a true testament to who he is. Being a freshman quarterback in the SEC, he’s barely 18, I think that’s huge props for him coming in and even completing a couple passes or scoring however many touchdowns he did.

“I think he had some good games back then, too. We have a lot of stuff going on as a team more than just offense and defense. We had a lot of off-the-field stuff going on. That is a huge testament to who he is to overcome all of that and become what a great player he is.”

Now that Paradis, the Broncos’ starting center the previous four seasons, has moved on to Carolina, McGovern is the Broncos’ short snapper. And he’s hiking not to Lock and the backups but first teamer Joe Flacco.

Since McGovern was the Broncos’ fifth-round draft pick in 2016, he has been around starting quarterbacks Trevor Siemian, Paxton Lynch, Brock Osweiler and Case Keenum. So what makes Flacco unique from the others?

“A lot of the quarterbacks have had a lot of great confidence, but Flacco’s confidence is the best there is," McGovern said. “In his mind—and it should be every Broncos players’ mind—he is the good man for the job. He’s an MVP quarterback. He’s a won a Super Bowl. He’s been MVP. He knows what it takes to win at a high level. I think that is the difference.

“Trevor and all of them were—we didn’t win as many games and we hadn’t been through those experiences, and I think that experience is a whole (different) level. That’s really what sets Joe apart. Trevor and those guys, when they’re in the huddle, they had their chests out high, they were fully confident and they fully believed in their abilities, but it’s just different when you have those Super Bowl MVPs to really know truly what it takes. I think that’s where Joe really steps it up.”

RELATED: Kareem Jackson doesn't want to be in middle of Harris' contract situation

McGovern became addicted to powerlifting during his time at Missouri. He once squatted 690 pounds and tore a pec muscle while bench pressing 515 pounds. He still spends his offseasons lifting weights down the street from the Broncos’ complex at former Buff and Bronco Matt McChesney’s Six Zero Strength facility.

“That is always going to stay pretty consistent," McGovern said. “Especially in the offseason, it’s a stress release. I’m not doing the weights like I did in college. I learned my lesson with pulled muscles and whatnot. Definitely toned it down, but getting back to confidence—it’s a confidence thing for me.

“When I know I’m going out there, there isn’t a whole bunch of guys that can lift as much weight as me. Granted it doesn’t apply, right? You have weak guys out there that are smoking dudes on the offensive line.

“It’s just that confidence thing and more if I do go a random heavy day, it’s a mental day. To be able to flip that switch and be that different person and have a little fun. It’s what I like to do for fun, but I’ve definitely toned it way back because I don’t need to be getting hurt in the weight room.”