Besides arguably the most enthralling, walkoff touchdown catch in team history, Thomas had a 4-year run when he averaged 101 catches, 1,477 yards, 10 TDs. 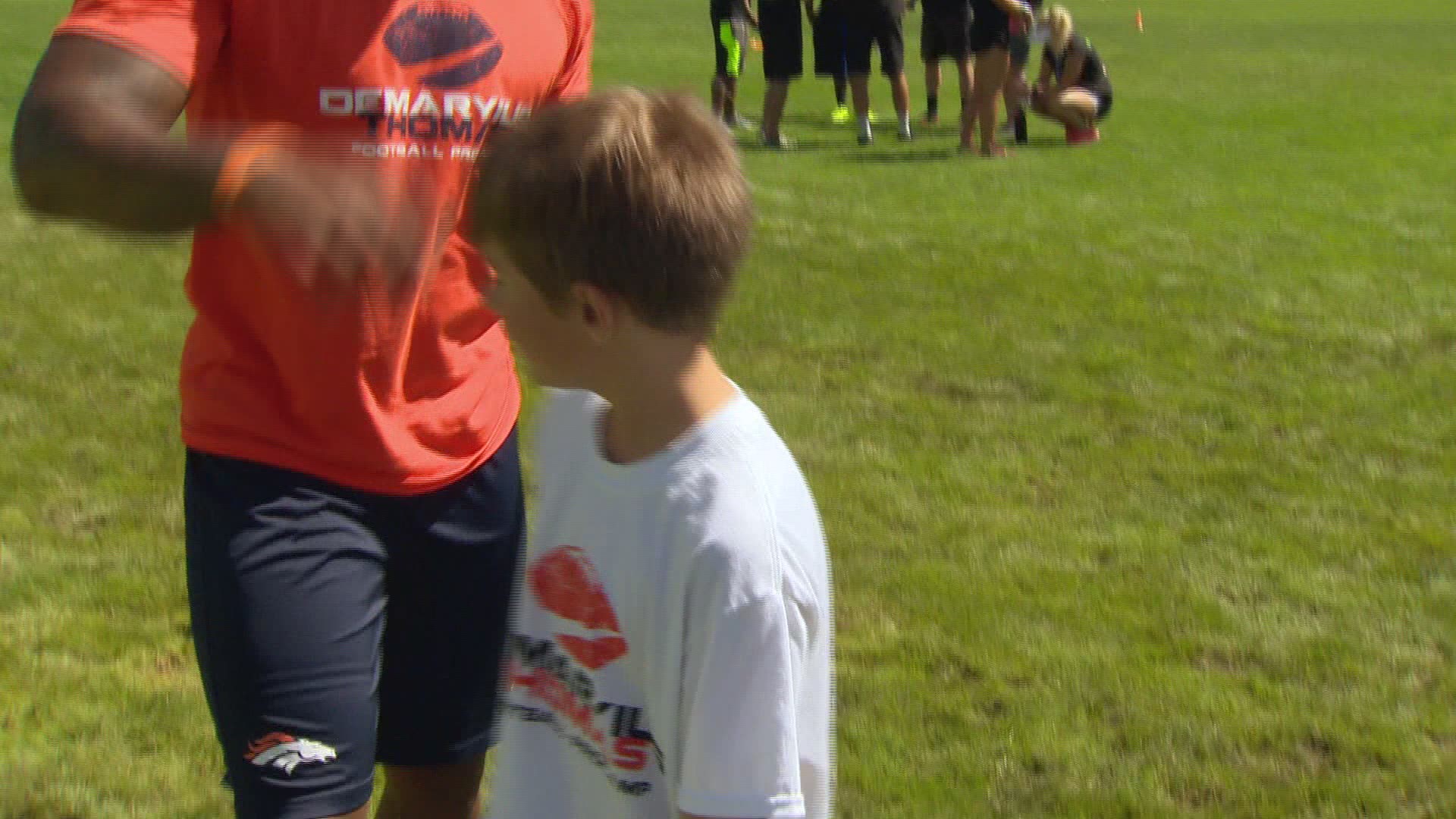 DENVER — Demaryius Thomas, who by all statistical measures is a top-two receiver in Broncos history, and who through the eyeball test just may have been the most talented receiver in franchise history, announced Monday his official retirement from the NFL as a Denver Bronco.

A team source told 9NEWS that Thomas, 33, will be honored during the Broncos’ home opener Sept. 26 against the New York Jets, the last team he played for in 2019. A video tribute will be shown at Empower Field at Mile High during the game and he will serve as the Broncos’ honorary captain.

Five years from now, the man simply known as “D.T.” figures to receive strong consideration for first-ballot election into the Broncos’ Ring of Fame.

> Above video: Demaryius Thomas hosts a camp for kids in 2016.

Even after sitting out last season, Thomas had been mulling a couple opportunities to continue playing before he started talking with the Broncos’ chief communications officer Patrick Smyth three weeks ago about possibly retiring as a Bronco. Over this past weekend, D.T. decided it was time.

From 2010, when the 6-foot-3, 225-pound Thomas was selected by then Broncos’ football boss Josh McDaniels in the first round of the 2010 NFL Draft, until he was traded to Houston halfway through the 2018 season, Thomas compiled enough production to rank second in team history with 9,055 receiving yards and 60 touchdown catches while his 665 receptions ranked third.

Those two greats, though, would admit Thomas alone possessed the rare athletic combination of height, strength, and take-it-the-house-from-80 speed.

* Sharpe and Odoms were tight ends. The others on the top 10 lists were receivers.

Counting his 10 playoff games with the Broncos, Thomas finished his career with 777 catches for 10,522 yards and 69 touchdowns. Impressive considering he was a raw receiver from a Georgia Tech program that featured a run-oriented option offense during his three seasons there. Still, in what may have been his best decision in an otherwise turbulent two seasons as the Broncos’ head of football operations, McDaniels saw enough in Thomas to make him the No. 22 overall draft selection in the 2010 draft — two spots ahead of where the Dallas Cowboys chose the more heralded (and controversial) receiver Dez Bryant and three selections in front of where the Broncos took quarterback Tim Tebow.

Thomas’ career got off to a slow start because of offseason injuries prior to his rookie year of 2010 and second year of 2011, but he had two breakout games late in the magical Tebow season of 2011. The first was game 12 at Minnesota when Thomas snared 4 catches for 144 yards and two touchdowns – all in the second half – to lead Denver to a come-from-behind, 35-32 win.

Impressive as 36 yards per catch was, Thomas did even better in the Broncos’ first-round playoff game against the heavily-favored Pittsburgh Steelers when he had four catches for 204 yards – 51.0 yards per catch – including an 80-yard catch-and-run walkoff touchdown reception from Tebow on the first play of overtime that gave Denver arguably its most exciting home win since their 1977 AFC Championship Game victory against the rival Raiders.

The 2011 season is also where Thomas began his string of 122 consecutive games played -- 132 including the postseason -- perhaps his most unappreciated accomplishment in a career of many.

During the four-year period from 2012-15 when Peyton Manning was the Broncos’ quarterback, Thomas was unquestionably one of the NFL’s top three receivers, along with Antonio Brown and Julio Jones. During that remarkable four-year span, Thomas averaged 101 catches for 1,447 yards and 10 touchdowns, easily the most dominant run in team receiving history.

Credit: AP Photo/Joe Mahoney
Demaryius Thomas crosses the goal line for a touchdown against the Pittsburgh Steelers to win the game in overtime of an NFL wild card playoff football game Sunday, Jan. 8, 2012, in Denver.

Thomas also played in two Super Bowls during that stretch, setting a Super Bowl record with 13 catches in a 43-8 loss to Seattle in Super Bowl 48, then having just one catch in the Broncos’ Super Bowl 50 win against Carolina.

“D.T. was the complete package as a wide receiver, growing into one of the very best at his position,'' former Broncos general manager John Elway said in a statement. "The combination of his size, speed, strength and athleticism was unmatched. Demaryius’ remarkable consistency and production were instrumental in our offense setting historic records and our team winning a lot of games, including two AFC Championships and Super Bowl 50. Equally as impressive as his many catches, big plays and touchdowns was the fact he didn’t miss a game for nearly seven years in a row. You could always count on D.T. He belongs among the greatest players in Broncos history for what he’s meant to this organization on the field and out in the community.”

During the Super Bowl champion reception at White House in June 2016, Thomas arranged to have a letter delivered to Barack Obama, which ask the sitting President to pardon his grandmother from a lengthy prison sentence on drug charges. Two months later, Obama did indeed commute Minnie Pearl Thomas’ sentence. A year earlier, Obama had commuted the sentence of D.T.’s mom, Katina Smith.

Born on Christmas Day, 1987, Thomas’ was 11 years old when a police raid at his Georgia home resulted in the arrest of his mom and then his grandmother on drug charges. Despite that traumatic childhood moment, Thomas was able to become one of the NFL’s best players during the 2010 decade and join Rod Smith and Lionel Taylor as one the three best receivers in Broncos history.

After he was traded to Houston midway through the 2018 season, Thomas went on a Denver radio station and expressed frustration at how the coaching staff and organization handled his situation. However, it appears peace has been restored in relative short order as he formally announced his retirement as a Bronco.

“For as humble and soft-spoken as Demaryius was during his nine years with our organization, you would have never known he was such a dominant player in our league,'' Broncos CEO Joe Ellis said in a statement. "I’ve never heard Empower Field at Mile High louder than his game-winning touchdown in overtime against the Steelers in the playoffs. He will always hold a special place in Broncos history as one of the greatest wide receivers to ever play for this franchise."

Credit: AP Photo/Adam Hunger
Demaryius Thomas runs for a touchdown during the first half of an NFL football game against the Oakland Raiders Sunday, Nov. 24, 2019, in East Rutherford, N.J.