2nd round draft pick rushed for more than 2,000 yards his last two years at North Carolina even though he split carries with Michael Carter. 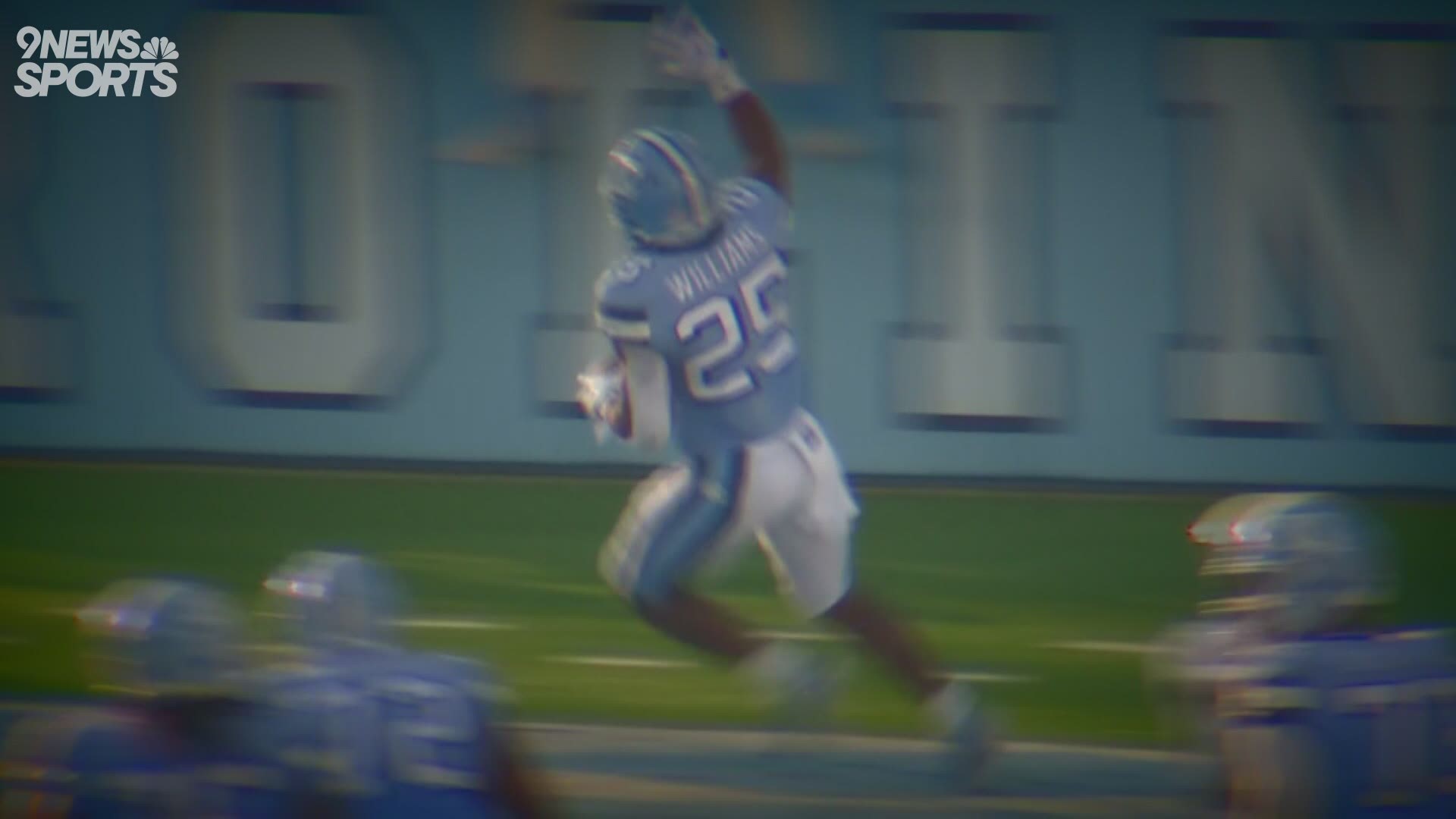 ENGLEWOOD, Colo. — Javonte Williams was asked if he knew who the smartest player was among the Broncos’ 10 rookie draft picks, at least as measured by the Wonderlic test.

He was too humble to guess himself. But he laughed when he was told he was indeed the smartest rookie.

Williams is not just a tackle-breaking wonder of a running back from North Carolina whom the Broncos traded up to the third pick in the second round to select in the NFL Draft two weeks ago. Not only did he score well on the pro prospect brain test, Williams was his class valedictorian at Wallace-Rose Hill High School in Teachey, N.C.

"It was definitely something my parents ingrained in me when I was young," Williams said in an exclusive interview Friday with 9NEWS. "From the time I was a little kid I always had to do my homework before I could go play. Everything started with making good grades. I used to get gifts from my parents, so that’s something I always tried to do."

Mom was a school teacher, dad a barber.

"Real close family," he said. "I get everything from them, how hard I work. They’re the best parents, I couldn’t ask for better."

Pat Surtain II was the Broncos’ first pick in the first round because he was the best player Denver general manager George Paton and his scouts had graded, not just the best cornerback. But Williams was the most exciting pick. After quarterback, which Paton elected not to draft, running back is still the most popular position among the fans, if not football contract bosses.

Running backs get the ball.

At North Carolina, Williams always had to share tailback carries, most often with the smaller, faster Michael Carter, who went in the fourth round to the New York Jets. Williams rushed for 2,073 yards his previous two seasons as a sophomore and junior for the Tar Heels. Carter rushed for 2,248 those two seasons as a junior and senior.

Imagine what Williams could have done had he been the one and only. Were there times when Williams wished he would have been the bell cow back in Mack Brown’s offense?

"Just seeing the accolades that other players got, you always want to be the star of the team or the main player," Williams said candidly. "But when you’ve got another great player like Michael Carter and we both worked so well together and it helped the team, you can’t be selfish. As long as the team is going good I’m cool with anything."

That attitude will help him split time with Broncos’ incumbent starting running back Melvin Gordon III, who rushed for 986 yards last season and will draw $6.94 million this year.

"When I was drafted he reached out to me and was saying “Let’s get to work,’” Williams said of Gordon. "I’ve been watching him since his Wisconsin days. A great player. I know I’m going to learn a lot from him and I’m ready to compete with him and all the other running backs in the room."

There was a time during his late-junior/early-senior years in high school when Williams thought about quitting football. He loved it but he was frustrated. The big college programs weren’t recruiting him. One reason was he had been more linebacker than running back his first three years of high school and while that helps him now -- “Yes, that linebacker mentality has definitely helped my running style and helped, like you say, with my contact balance,” Williams said – the defensive position made it difficult for Power 5 conference to find his calling.

And so Williams had to be talked out of hanging up his shoulder pads.

"Yes, I was just going to go to school and just be a regular student," Williams said. "Because I felt like I deserved better offers than what I was receiving. I didn’t want to risk my education just to play football at a smaller school. I wanted the best of both worlds, honestly."

It all worked out.

"Javonte Williams, our national scout Nick Schiralli, who does an outstanding job, he gets to know these players inside and out, this was his favorite player in the draft," Paton said back on May 1 after the Broncos’ draft was concluded. "Maybe not a top 10 pick but his favorite player just from watching.

"The thing about him, he’s really hard to tackle. If you watch him, you see they have a hard time tackling him because he’s so physical, he’s built low to the ground. He breaks tons of tackles."

Breaking tackles can eventually wear on a running back’s quads and shoulders but this is where Williams saw another benefit in sharing the ball with Carter for the Tar Heels. The universal scouting report states Williams is completely healthy.

"I honestly feel like that came from being with Mike and the committee," Williams said. "Not getting as many hits as other players did. So that’s one of the plusses of being in a committee also."

Wearing No. 33 with the Broncos, Williams got indoctrinated to pro ball during the Broncos’ rookie minicamp this weekend. He will then join the veteran players for the start of the Phase II offseason program Monday. And yes, more veteran players will show up for Phase II than the 20 or so who attended the just completed, four-week, Phase I conditioning period.

"Just like anything change is always different but I’m getting used it being out here in Colorado," Williams said about his rookie minicamp experience. "A beautiful city. Picking up plays, everything is going smooth. But it’s just like freshman year, pretty much starting over and try to work your way to the top."

"We just got off the practice field," he said with a chuckle. "I definitely felt it."