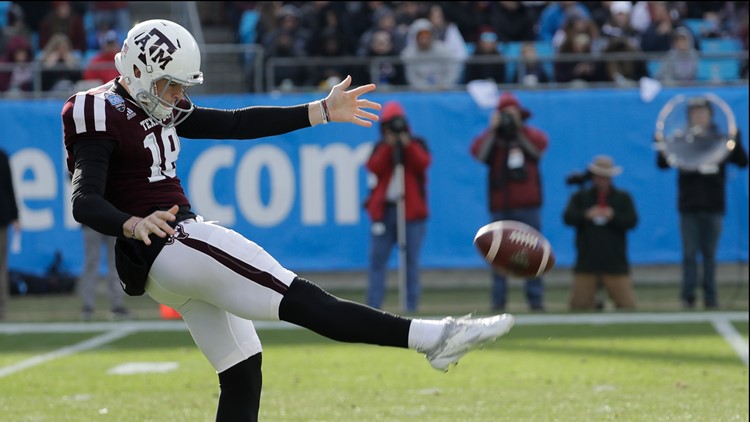 ENGLEWOOD, Colo. — Shane Tripucka — a punter and grandson of Broncos’ Ring of Fame quarterback Frank Tripucka —  is among the players Denver is bringing in for “future” special teams workouts on Thursday, sources tell 9NEWS.

Shane Tripucka ranked second in the NCAA in his senior year at Texas A&M in 2017 with a 43.4-yard net punting average.

Tripucka previously spent time with the Los Angeles Chargers during the 2018 offseason but otherwise has yet to catch on in the NFL.

It often takes young punters and kickers a year or two to gain full-time employment with an NFL team.

Even Adam Vinatieri, who despite his late-career struggles is considered the league’s best kicker of all time, spent his first professional season kicking in Amsterdam.

Shane Tripucka’s grandfather Frank was among the first class of Broncos’ Ring of Famers.

Frank Tripucka, who was 85 when he passed away in 2013, was the first QB in NFL-AFL history to reach 3,000 passing yards in a season when he did so in the Broncos’ inaugural season of 1960.

Trevor Daniel and Ryan Anderson also participated in the Broncos' workouts Thursday. Daniel was the Houston Texans’ punter last year and the first two games of this season. Anderson punted for the New York Giants during the preseason. This is his second workout with the Broncos this year.

A couple players from today’s workout may sign with the Broncos within days after their regular season ends on Sunday, Dec. 29 when rosters unofficially expand from 53 to 90 players.

Justin Simmons, a fourth-year safety, was the Broncos’ nominee for the Walter Payton Man of the Year Award.