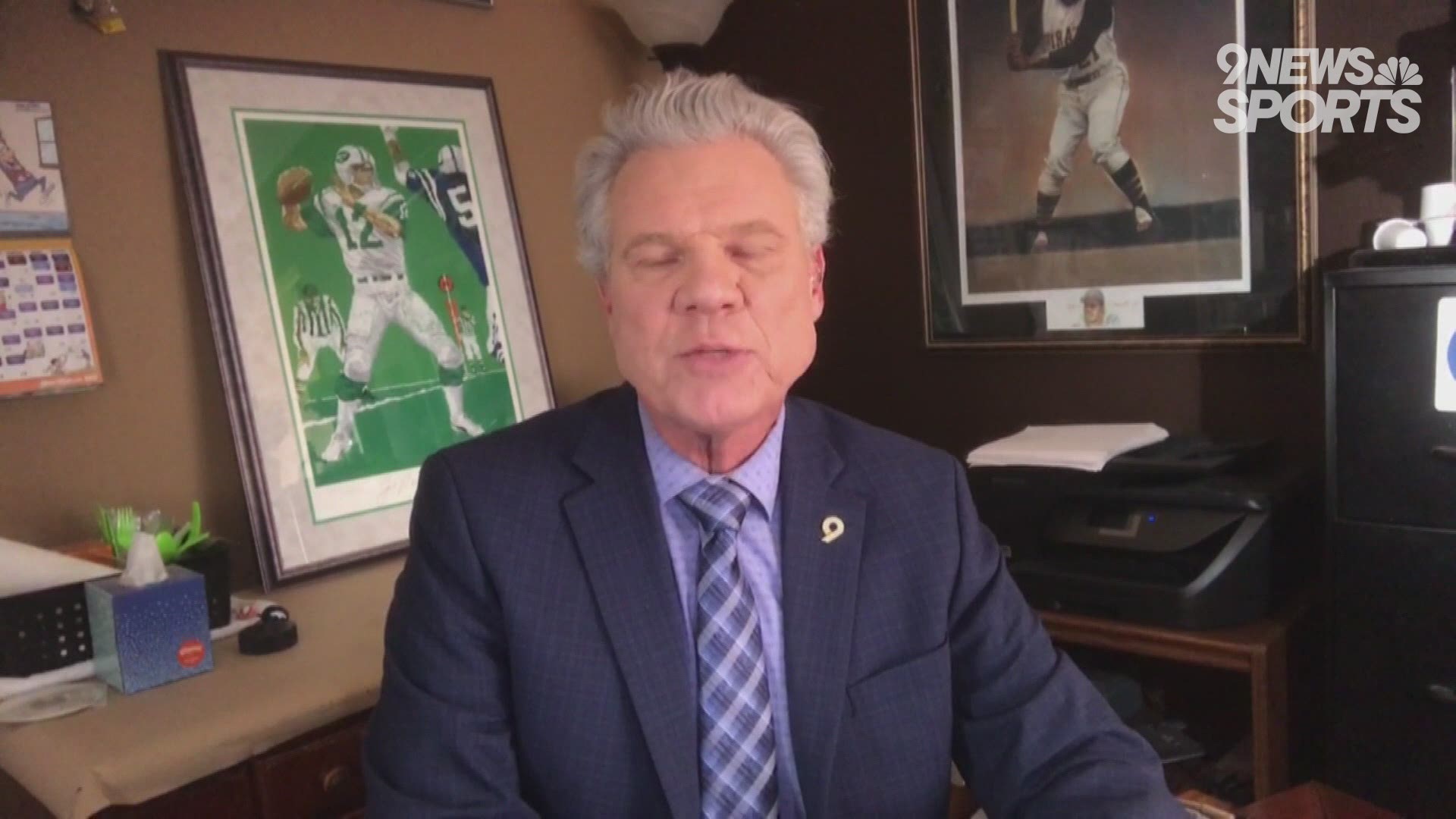 DENVER — Understandably caught up in his own excitement as his name was called early in Day 2 of the NFL Draft, KJ Hamler would not find out until later how much of a surprise he was to Broncos Country.

The Broncos had taken receiver Jerry Jeudy with their No. 15 overall pick in the first round Thursday. For the most part, that pick was expected.

But in the second round on Friday, when the Broncos needed a cornerback, center and inside linebacker they selected … another receiver?

If it helps, Hamler was surprised, too.

“It was pretty fascinating,’’ he said via Zoom video conference with 9NEWS over the weekend. “I didn’t even expect the Broncos to call. I talked to coach (Zach) Azzanni one time so it didn’t really cross my mind. But that’s how a lot of people say this stuff goes, a lot of teams that don’t contact you will end up drafting you.

“I thought I was going to Philly, or the Bears, actually. But I ended up in Broncos Nation and I’m glad to be part of the organization.”

People from the Eagles and Bears were in more frequent pre-draft contact with Hamler, a small but absurdly fast receiver from Penn State.

“They were calling me and texting me,’’ Hamler said of the Eagles and Bears. “They were showing a lot more interest. I don’t know how this stuff works. It was pretty new to me. It was weird.’’

The relatively quiet Broncos with pick No. 46 nabbed Hamler even though they had already used their first-round selection on Jeudy. Offensive firepower times two.

“I was ecstatic. I was screaming. I was hollering,’’ LaTonya Gooding, KJ’s mother, said from the same Zoom call at their Michigan home. “I just felt like I couldn’t thank God enough. And thank you guys enough for believing in him.

“So many adversities we faced over the years but for you guys to take a chance on him and believe in him it was … Oh my God, it was surreal. It still feels surreal. My adrenaline is on 199.’’

Adult decision while still a kid

A precocious child growing up in the Pontiac, Michigan area outside Detroit, Kahlee Jacoby Hamler was faster than other kids since before he can remember.

“My dad told me it was kindergarten,’’ he said with an ever-present smile. “He had to chase me in the back of a store and he couldn’t get me. I think it was Target. I guess they were mad at me but I’m not going to let anybody catch me.”

He attended Orchard Lake St. Mary’s Prep School, where he helped the Eaglets win Division 3 state football championships in both his sophomore and junior years. In his final game there, he caught two touchdowns for the 2015 state title.

Rather than stay at the school where he was a popular, outgoing student-athlete and help his school win its third consecutive state title, Hamler began to engage in a series of grown up, life-changing decisions.

For his senior year, he transferred to the IMG Academy in Bradenton, Fla. Sounds nice but that meant a 17-year-old living 1,250 miles away from mom and dad.

“It was a business decision for me,’’ said Hamler, who still doesn’t turn 21 until July 8. “IMG was recruiting me. My godbrother, Devon Funchess, he plays for the Packers, they contacted him, and he contacted me and said, ‘Little brother, I want you to go down here and compete.’

“It wasn’t about getting different scholarships. I already had all I needed (26 offers). It was more so getting prepared for college. Going against the best of the best each and every day.

“It was a comfort zone change. I was there by myself, I had to grow up fast. My parents weren’t down there with me. It was different but it was good. It was a good choice for me.”

It was not easy for his parents to let go of their son for even a few months so early in his life. But they had always tried to provide the best for KJ and once they received information on the IMG Academy, they understood their son would receive one of the country’s top college-prep educations both athletically and academically.

“Making the decision was hard, but I understood the big picture,’’ LaTonya said. “He wanted to compete not just among the kids here in the (Detroit) metropolitan area.

At which point, Hamler immediately suffered a series of emotional setbacks. In August of 2016, he tore his ACL in IMG’s first game of the season. There went his senior season. To further check his pride, both the IMG and Orchard Lake St. Mary’s schools went on to win their respective state football titles without him.

The devastating injury had followed the tragic death of close friend Eric Wynns. A 24-year-old receiver for Saginaw Valley State, Wynns died in a one-car rollover crash after he apparently fell asleep at the wheel during the 75-minute drive up I-75 Interstate  to his school.

“That was something I really couldn’t deal with because he was the person who really taught me how to play ball,’’ Hamler said. “He was 5-5 but had the biggest heart. From that dog mentality standpoint, he really taught me everything. It hurt me but I had to get over it. I’m never going to ask God why he does things. But it took a toll on me.’’

Getting past the loss of a good friend may have been one reason why Hamler decided to leave home for a new life at IMG. Although he had committed to Michigan State as a junior in high school, Hamler decided instead to attend Penn State, where it was far enough from hometown influences, yet close enough to family in case of an emergency.

And then while redshirting his true freshman year at Penn State to further recover from his ACL surgery, Hamler lost another friend. Solomon Bonner was only 14 when he died March 23, 2017 from what was described as an accidental gunshot during a card game.

The teenager who was in possession of the gun when it fired was later sentenced to four years in a juvenile detention facility.

“(Solomon) was younger than me. He looked up to me like a big brother,’’ Hamler said. “Missing two years  of ball with that stuff on my mind really took a toll.”

After not playing football in years 18 and 19 of his life, and after losing two friends, the 5-foot-8 ½, 178-pound Hamler returned to the football field for the Nittany Lions.

In his first game as a redshirt freshman in 2018, Penn State surprisingly was getting losing, 38-31 to Appalachian State with 1:47 remaining. From deep in his end zone, Hamler ran out the kickoff for a 52-yard return. He then finished the game-tying drive with a 15-yard touchdown catch from Trace McSorley with 42 seconds remaining. Penn State won in overtime.

Hamler finished his redshirt freshman season with 42 catches for 754 yards -- 18.0 yards per catch -- and five touchdowns. As a sophomore, he added 56 catches for 904 yards and 8 touchdowns.

Again, Hamler was ready to make an adult decision.

Rather than stay for his redshirt junior season, Hamler made himself eligible for the draft. The Broncos saw that he struggled with drops. But they also believe Azzanni can coach those drops out of him.

And they saw him pull away from defenders during a long touchdown return that was called back by penalty.

He has the home-run speed the Broncos haven’t had since Trindon Holliday in 2012-13.

With the Broncos, Hamler figures to operate from the slot, or the third receiver for quarterback Drew Lock, along with Courtland Sutton and Jeudy.

Hamler is also pleased about reuniting with Penn State teammate DaeSean Hamilton, who as a senior helped the young freshman snap out of his mental funk.

“He really taught me how to slow the game down as a freshman,’’ said Hamler, who was able to practice while redshirting in 2017. “I was under his wing my freshman year and I’m going to be under his wing again as a Bronco. I’m very excited to be playing with him.”

Won’t it be a little awkward, though, if the rookie Hamler takes reps ahead of the third-year Hamilton this season? Hamler, remember, is mature beyond his years. He handled the question like a 10-year pro.

“I think coach Azzanni is going to play the best players,’’ Hamler said. “I’m going to go there, work hard, learn from the older guys, especially ‘Ham.’ Ham is one of my best friends, so learn from him like I did in college and I think everything is going to work out just fine.”

Since the global coronavirus shutdown six weeks ago, Hamler has been with his parents at their Michigan home. He will join his other 2020 NFL classmates for the Broncos’ virtual rookie minicamp on May 11.

The Broncos’ offseason consists of virtual meetings. The players are responsible for working out on their own. Fine by Hamler, who has been holding himself accountable and responsible at a far younger age than others.

“It’s pretty cold here, like 30 degrees, so it’s hard to get outside sometimes,’’ he said. “But sometimes you have to put on three hoodies and just go run. And I’ve got a set of weights in the basement so I go lift when I need. And I’ve  got a JUGS machine outside to catch balls. So I’m adjusting to things.”

Mom was asked what kind of young man Denver is getting.

“You are getting a very humble, respectful young man,’’ LaTonya said. “He’s going to bring a lot to you guys’ organization. I’ll tell you what, if you’re ever in a down spot, he’s going to be one to brighten it up and try to make a positive from a negative.

“Just an awesome young man. KJ has always been a hard worker. He’s made this process from the age of 4. We’ve never had  to push him to do anything. He always wanted to do it. Camp, training – those are traits he’s always had. He’s going to work hard for you, believe me. You’re not going to tell him twice to do something. He’s going to take what you say, perfect it, and it’s going to be right.”