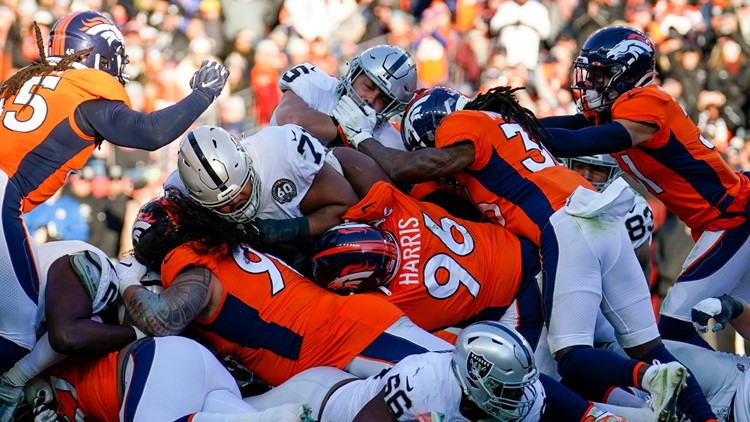 Photo by: AP
Oakland Raiders running back Alec Ingold, above center, is stopped before the goal line during the first half of an NFL football game against the Denver Broncos, Sunday, Dec. 29, 2019, in Denver. (AP Photo/Jack Dempsey)

Fangio brought toughness to Broncos in 2019

ENGLEWOOD, Colo. — It was a Ring of Fame Friday in mid-November 2017 and after kibitzing with former teammates inside a temporary, heated tent, Broncos General Manager John Elway sauntered over to an awaiting media group to address his current team’s woes.

The Broncos were not only losing, they were getting crushed.

“To be dead honest with you,’’ Elway said then, “We got a little bit soft.”

Calling football players “a little bit soft” is harsh, but when the hardly motivated Broncos promptly lost their next three games – finishing up their 8-game losing skid with a humiliating 35-9 loss to a bad Miami Dolphins team – Elway’s only regret was couching “soft” with “little bit.”

Move ahead two years and lost amid the understandable buzz surrounding the fine late-season play of rookie quarterback Drew Lock was an equally encouraging element that re-surfaced with the Broncos: Toughness.

It started in training camp when first-year head coach Vic Fangio consistently held long, padded practices. It wasn’t unusual for practices to last 2 hours, 30 minutes. One went 2:45, or an hour longer than the camp practices organized in past years by Mike Shanahan, Gary Kubiak and Vance Joseph.

And the players wore full pads – which means more physical blocking and tackling -- for two straight weeks. Such physicality was unheard of in the Shanahan, Kubiak, Joseph years. Not that the Shanahan, Kubiak and Joseph methods don’t work. See the 49ers-Vikings second-round playoff matchup Saturday afternoon.

The Broncos still weren’t very good – certainly not good enough at 7-9. But they played hard every week and were competitive against more talented teams. They not only didn’t cave following an 0-4 start that included two heart-crushing walk-off defeats, they finished 7-5 with impressive wins against playoff-bound Tennessee and Houston.

Even when they were all-but-eliminated at 3-8 following a disappointing performance by No. 2 quarterback Brandon Allen at Buffalo, the Broncos rallied behind Lock and a competitive will to finish 4-1.

“I think that goes back to starting to work with the guys in April once we met with them and had that extra minicamp,’’ Fangio told 9NEWS last week. “All the work we did in the offseason. And then with the extended training camp.’’

RELATED: Look back on how Elway settled on Lock as his QB

Oh yes. Not only were the Broncos’ practices longer and more physical than in years past, training camp was a full week longer than 30 other NFL teams because of their added fifth preseason game in Canton, Ohio.

“And I think they took an objective view of things rather than an emotional view of things. It was through that, that guys hung together. Kept playing and we were able to finish the season strong.”

Objective view vs. emotional view. There was reason to wonder if Fangio’s emotionless style was a detriment to his team winning on game day, especially in the season opener at Oakland, where the Raiders came out rocking with frenetic emotion and a 14-0 halftime lead.

Vic Fangio consults his charts during the first half of an NFL football game against the Kansas City Chiefs in Kansas City, Mo., Sunday, Dec. 15, 2019.
AP Photo/Charlie Riedel

But consistency matters over a 16-game season and by the end, the Broncos were a better team than the Raiders.

Denver’s mental toughness was there till the very end when Shelby Harris knocked down quarterback Derek Carr’s 2-point conversion in the final seconds to preserve the Broncos’ win in an otherwise meaningless season finale against the playoff-hopeful Raiders.

Looking forward to the 2020 season, the Broncos and their faithful are buoyed knowing Lock will be there at the start. Optimism should be guarded, though. It’s one thing to finish 7-5 after an 0-4 start. It’s another to finish strong after starting strong.

Fangio doesn’t look back at 0-4 and boil. He looks back at 0-4 with reasoned explanation.

The Denver Broncos start a play against the Oakland Raiders during the second half of an NFL football game Sunday, Dec. 29, 2019, in Denver. (AP Photo/Jack Dempsey)
AP

“We let the Chicago game and the Jacksonville game get away from us. For a multitude of reasons. One that was out of our control. I think you know what I might be alluding to.’’

He was referring to the highly questionable, late-game, roughing-the-passer calls against Bradley Chubb and Von  Miller.

“And two, we just didn’t execute down the stretch the way we need to. I think when you look at things objectively and through the football lens and not an emotional lens, you come up with answers and solutions better.’’

Fangio’s players followed 0-4 by beating the Chargers on the road and shutting out Tennessee in consecutive week. Yes, the Titans didn’t play now sizzling hot quarterback Ryan Tannehill until the second half. But the Broncos didn’t have Lock at all.

Lock is one reason there is optimism for the Broncos in 2020. But not the only.

RELATED: We asked Coloradans how they would feel about Tom Brady as a Bronco — and they had feelings