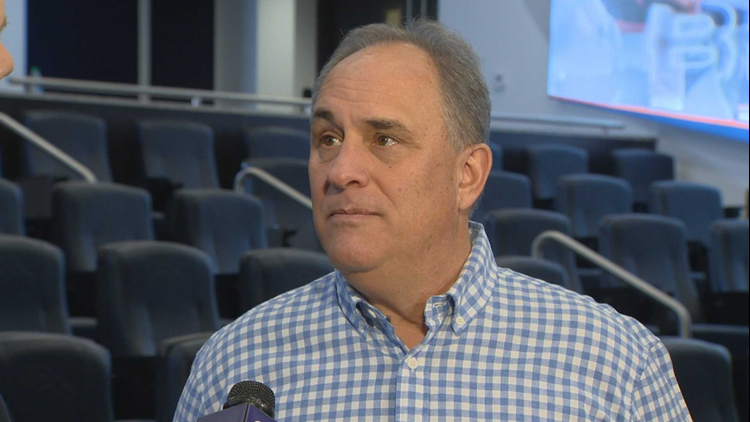 ENGLEWOOD, Colo. — This is the first time Vic Fangio has gone through free agency as a head coach. Did he learn anything?

"No, it’s been the same as always, just involved with the other side of the ball a little bit more," he said.

The Broncos’ new head coach got his first big-boss coaching job at 60 years old and after 40 years as an assistant – 32 of those lieutenant years in the NFL.

John Elway, the Broncos’ general manager, organizes and runs the team’s free agent operations. But every day for a few weeks he talked about every position, and many of the available free-agent players, with his head coach.

"We had very casual talks about it," Fangio said in an interview with 9NEWS. "When I got here, John and his guys had opinions formed on the free agent market already. We went to work and watched them. When we matched up and saw players the same way, we got excited and those were some of the guys we went after.

"You’re always trying to get players that everybody in the building sees the same and likes. So it was a nice commitment there."

RELATED: Elway, Fangio officially have Flacco as their quarterback

"They were people we wanted, and we were able to stay on them and get it done," Elway said. "I think they wanted us, too, which always helps. With Kareem, the success he’s had, his versatility playing corner and safety. The physicality he brings to the game. Kareem was a focal point for us.

"And then with Ja’Wuan, we’ve been working on the right tackle position for a while. Jared Veldheer played very well for us last year but Ja’Wuan’s young. He’s 26 years old, a first rounder. We think he’ll continue to grow and get better.

"We feel good about who we’ve got on the edges with Garett Bolles and Ja’Wuan. He’s very athletic and what we’re going to do offensively they’re both a good fit."

It’s fair to say Jackson was priority No. 1. James became priority No. 1B if the Broncos were unable to bring back Billy Turner. Which they couldn’t.

Once Turner rejected the Broncos’ offer early Monday afternoon and headed toward Green Bay, Elway went all in on James. After trying $6 million-a-year free agents at right tackle in 2016 (Donald Stephenson) and 2017 (Menelik Watson), then nudging up to $7 million last year (Veldheer), Elway made James the NFL’s highest-paid right tackle with a four-year contract at $12.75 million a year.

RELATED: Elway not concerned about interior offensive line without Paradis

James gets a fully guaranteed $27 million in his first two seasons combined.

"We think he can be a Bronco for a long time," Elway said. "He’s 26 years old and fits the system very well. In today’s world, there is a lot of money out there, but we feel like we got better as a football team."

Elway’s successful recruitment of James – who sent a behind-the-scenes message entering free agency he wanted to wind up with the Broncos – met the approval of his new head coach.

"I like his youth No. 1," Fangio said. "This is his first crack at a second contract in the NFL. So he’s a rookie per se as a free agent. There’s a lot of football left in him. I think he’s got a chance to be a fixture on our offensive line for many, many years. He’s not one of those free agents where you only have him for a year or two.

"So I like that. I like his length, his athleticism. Both our scouting departments and our offensive coaches really liked him."

RELATED: Matt Paradis to get $9 million a year with Carolina, which is what Broncos offered pre-injury