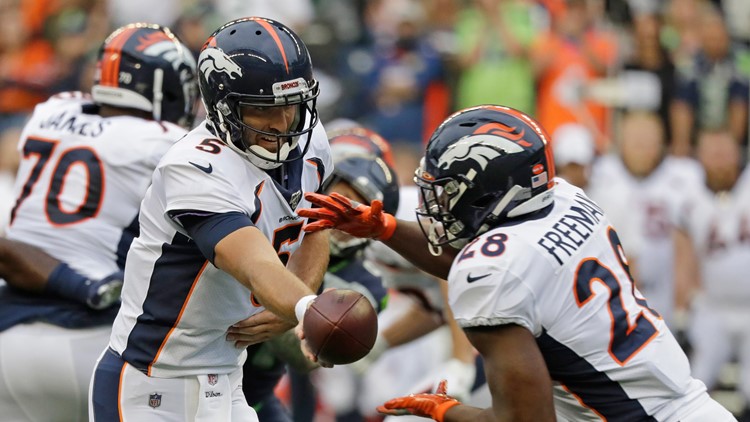 Klis List: What the Broncos must do to beat the Antonio Brown-less Raiders

OAKLAND, Calif. — All Antonio Brown’s me, me drama did was change the Raiders from a home favorite to a decided underdog against the Broncos when the AFC West rivals meet Monday night.

From 2.5 points up to 2.5 points down, according to the Westgate Superbook, which is located in the Raiders’ future home of Las Vegas.

One last time in the Black Hole, the Broncos have to play much better than they did back on Christmas Eve when they got whipped, 27-14 by the Raiders.

They will. Vic Fangio is their new coach and Joe Flacco is their new quarterback and they are the two biggest reasons why the Broncos should be better this year.

In a 16-game season, improvement needs to be noticeable in week 1.

Here is a Klis List of items the Broncos must follow if they are to beat the Raiders for the last time in Oakland:

This is Flacco’s 12th consecutive season-opening start, first for the Broncos after 11 seasons with the Baltimore Ravens.

He was terrific in Game 1 last year as he completed 25 of 34 for 236 yards and three touchdowns with no interceptions in a Ravens’ 47-3 rout of Buffalo.

The Broncos can’t let up just because there’s an enormous drop off between Brown – who rivals Atlanta’s Julio Jones as the league’s two-best receivers – and Tyrell Williams, Renfrow and J.J. Nelson.

Williams, a legitimate No. 2 receiver for the Chargers the previous three years, will now be Derek Carr’s top target. Renfrow is a slot guy. Nelson is a speed receiver who doesn’t catch many, but can catch a deep one.

The Broncos have a chance to claim the league’s best pass-rushing duo in Von Miller and Bradley Chubb. But the Raiders made moves each of the past two seasons to compile what could evolve into the best offensive tackle duo in Kolton Miller, a first-round pick last year, and Trent Brown, who became the league’s highest-paid right tackle this year.

Did you see the Bears’ defense in the first quarter before their Soldier Field home crowd on Thursday night? They held Aaron Rodgers and the Packers to three, three-and-outs and -12 yards in total offense.

But then on the first series of the second quarter, Rodgers moved the Packers 74 yards on four completions in four plays for what turned out to be the game-winning touchdown.

There is a point in almost every NFL game, sometimes two, when it doesn’t look good for the eventual winning team. The trick is to stay cool and poised when all seems lost. A calm team will stay ready to strike when the opportunity presents itself.

Stop the Bama rookie running back

It’s been said – stated as fact, even – that the University of Alabama’s backups can be starters anywhere else. Josh Jacobs depicts that notion. He entered the draft after his junior season even though he shared the backup role behind Damien  Harris and alongside Najee Harris last season – and became the No. 24 overall selection in the first round.

Jacobs played in one preseason game and had four carries for 21 yards so he’s in position to surprise people.

With Antonio Brown gone to New England, and pass rushers Miller and Chubb representing the strength of the Denver defense, the Raiders will try to run the ball.

Stick with Lindsay, Freeman and the running game

The Broncos have a much-ballyhooed new offensive line coach in Mike Munchak. Nothing would buoy the spirits of the Broncos’ five-man blocking front and its new leader than about 150 yards rushing.

Lindsay crossed the 1,000-yard milestone in Oakland last season but he also suffered a wrist injury that would require surgery in that game.

Freeman should be stronger in the second half as the Raiders’ defense tires.

On paper at least, the Broncos have a nice pass-catching trio in the veteran Emmanuel Sanders, who has four seasons of at least 71 catches and three of at least 1,000 yards; Courtland Sutton, who had 704 yards as a rookie last year; and Noah Fant, a first-round tight end who has the speed to separate.

In the biggest play of their Christmas Eve loss last year at Oakland, the Broncos’ Colby Wadman dropped a beautiful punt down to the 1-yard line. But after Isaac Yiadom batted it, Dwayne Harris picked it up and ran 99 yards for a touchdown.

The Broncos struggled with special teams coverage again during the preseason, prompting general manager John Elway to pick up the likes of Duke Dawson, Devontae Harris, Andrew Beck and Corey Nelson in the final hour of roster setting.

Starting cornerback Bryce Callahan is still iffy from a foot injury he aggravated during the Broncos’ stadium practice on July 27 – six weeks ago. It was the same foot he broke last year with the Bears and had surgically repaired.

If Callahan can’t go, the Broncos would likely start Isaac Yiadom with De’Vante Bausby moving up to No. 3 cornerback and Dawson ready as No. 4.

A two-deep zone with Kareem Jackson and Justin Simmons roaming as safeties can cover up any vulnerabilities.