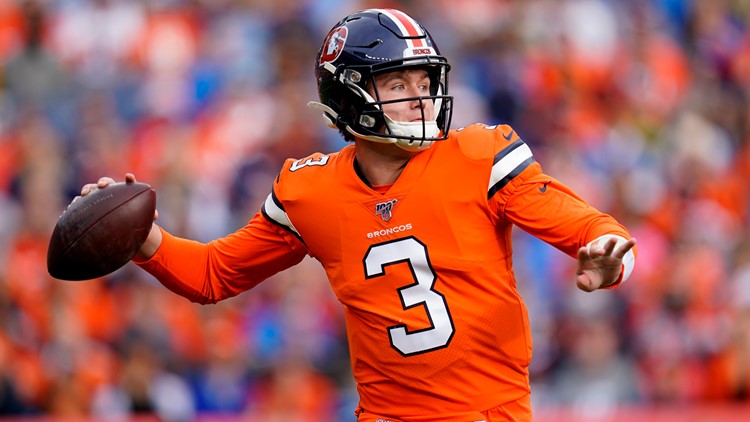 Photo by: AP Photo/Jack Dempsey
Denver Broncos quarterback Drew Lock (3) throws against the Detroit Lions during the first half of an NFL football game, Sunday, Dec. 22, 2019, in Denver.

Look back on how Elway settled on Lock as his QB

ENGLEWOOD, Colo. — In the days leading up to the NFL Draft last April, John Elway’s regard for Drew Lock was a poorly kept secret.

The Broncos’ general manager had personally scouted two college quarterbacks during the 2018 season – Oregon’s Justin Herbert and Lock of Missouri. Elway was accompanied by his right-hand man Matt Russell for both game-day college visits; then-personnel consultant Gary Kubiak came along on the trip to Missouri, where Lock threw for two touchdowns and ran for two in a blowout win against Arkansas on a chilly, rainy late-November day in Columbia.

Herbert returned to Oregon for his senior season, leaving Lock alone for Elway to consider.

"Saw him against Arkansas, bad weather that day," Elway recalled in a sit-down interview with 9News last week. "But I loved what I saw on tape from Drew. He is very athletic. He can make all the throws. Was a guy that was a great competitor."

Hold on there, John. Athletic. Until he started getting competition from the likes of Patrick Mahomes, Deshaun Watson and Lamar Jackson the past two or three years, Elway was considered the most athletically proficient quarterback in NFL history (with Steve Young a close second, followed by Michael Vick as a distant third).

Elway likes athleticism in his quarterback.

"I do. I think in today’s game you’ve got to have an athlete there," Elway said. "Obviously, Drew (Brees) and Tom Brady, they’re not the most  nimble guys but what they do mentally, they’re so far ahead of everybody else.

"But I think in today’s game you have to be able to avoid the rush. And buy a second chance. Drew is only going to get better at that. Especially when he starts moving, being able to keep his eyes downfield and make those plays downfield. But he had the athleticism."

Elway missed on Paxton Lynch, another athletic quarterback who, as it turned out, lacked certain intangibles for the position, in the first round of the 2016 draft. But the early indication is it appears the Broncos’ GM hit on Lock in the second round of the 2019 draft.

Inheriting a Broncos team that was 3-8 with five games remaining, Lock went 4-1 while completing 64.1 percent of his passes with 7 touchdowns against 3 interceptions. He also rushed for 72 yards.

"Again, we’re not ready to anoint him as the next Hall of Famer," Elway said. "But we’re  excited about him. As I keep saying, we’re going to build him up and people love him and he’s a great kid and they’re going to build him up – but he’s got to be ready to get knocked down. And he hasn’t done that. And that’s going to happen. And it’s going to happen more than once and how he handles that and how he bounces back from that will determine how long and how great his career is going to be."

RELATED: Elway seems to have picked right coach and QB, but more work needed in his 10th season as GM

The plan is for Lock to get the entire 2020 season to get knocked down with a clunker game or two – hopefully no more – and bounce back the next week.

During his nearly 30 years of active ownership starting in 1984, Pat Bowlen cared deeply about his team’s quarterbacks. He was an owner who understood more acutely and quickly than others that an NFL franchise is foremost about its quarterback.

Bowlen is why Denver is considered such a quarterback town.

Mr. B, who died last June from Alzheimer’s complications, had a paternal affection for Elway when the latter was the team’s quarterback. Later, Bowlen had a special relationship with Jake Plummer, an unconventional, free-spirited  quarterback who while sporting hair to his shoulders and a beard past his Adam’s apple, led the Broncos to the AFC Championship Game in 2005.

Not to get in the middle of things but Joe Ellis was Bowlen’s right-hand man for nearly 20 years who for the past six years has been the Broncos’ controlling owner delegee.

Ellis picked up on his longtime boss’ respect and admiration for quarterbacks. It was Ellis who walked into Elway’s office after the final game of the 2011 regular season and said, "What do you think of going after Peyton Manning?"

When Elway voiced concern about whether the franchise had the financial wherewithal to lure Manning, Ellis said, “We’ll find the money.”

Manning is gone and the Broncos have struggled mightily to replace him until Lock came along at the end of 2019. What did the Broncos’ CEO think of his rookie quarterback?

"I’m bullish on Lock," Ellis said in his sit-down interview with 9News on Monday. "I just love the energy and the excitement. A very socially aware, intelligent guy.

"Quarterback is the most important position in sports, I think, and to be great requires a lot of work. And we’ve had two great ones here. One of them was one of the greatest athletes in the history of pro sports and he resides upstairs in an office here. And the other one -- I’ve never seen a guy work harder and study more and really master his craft more than Peyton Manning did.

"So that’s the standard, right, that the fans are used to  and compare against. And so it’s big shoes to fill but I think the guy’s got the confidence and swagger and ability and the intelligence to do it.

"But it requires work. I was pleased when he told all of you in the press after the game that he’s looking forward to having conversations with John Elway and Peyton Manning as to how he can improve, things he needs to do to become great. Because he’s got to do all of that in the offseason in order to become great.

"He showed a lot of flash and a lot of good qualities to be a real leader for us moving forward. And I know his teammates are excited. As I said, I’m bullish and I’m excited to see him play next year."

Going back to the days leading into the NFL Draft last April 25, Elway strongly considered taking Lock with the Broncos’ No. 10 overall draft pick. His gut based on his own personal evaluation told him Lock was the guy but contrary to belief, Elway does not surround himself with "yes" men.

A couple months earlier, the team had acquired veteran Joe Flacco to be their starter in 2019 and with the Broncos coming off 5-11 and 6-10 seasons, there were so many other roster needs that doubling down on quarterback seemed like a luxury.

Plus, there was some sentiment and intel that Lock would slide. So Elway and Russell traded back from No. 10 in exchange for the Steelers’ No. 20 pick in the first round, No. 52 pick in the second round and third-round pick in 2020.

A veritable haul. The Broncos took tight end Noah Fant at No. 20 – all he did was break the team’s rookie reception and yardage records – and used the No. 52 selection as the central piece to trade up 10 spots to No. 42 and take Lock.

Instead of taking Lock at No. 10, the Broncos wound up with Fant, Lock and a third-round pick to be used in the draft this April.

For the first time since the offseason of 2015, when he had Manning and Brock Osweiler returning at quarterback and Kubiak as his new head coach, Elway will go into a new season confident he is set at football’s two most important positions. His task now is to acquire upgrades at other positions to help his head coach and quarterback.

Elway’s priorities are a new starting receiver, 1B running back, and blocker or two on offense; a cornerback, defensive lineman and maybe a linebacker or two on defense.

But it’s easier finding men to fill those roles than a quality head coach or quarterback.

"Yeah, it makes my job that much easier when you have that confidence," Elway said. "You feel like you have a young guy who is going to continue to get better. You hope he does.

"But also with Vic and his experience as a head coach, his coaching staff what he did there, we’ve got a lot of confidence in them. So it makes my job much easier where we’re not heading into a coaching search and we can step away a little bit and really start concentrating on our football team and try and figure out where we can get better."

In the AFC playoffs that began Saturday, the two first-round winners, Houston and Tennessee, were each beaten handily by the Broncos this season. Perhaps this an indication Denver is closer to becoming a postseason team than its 7-9 record would indicate.

RELATED: As Broncos QB, Lock eventually must outscore Mahomes and the Chiefs

Are the playoffs are realistic goal in 2020?

"Absolutely," Elway said. "That’s the plan every year. That was the plan this year. It didn’t work out. But that’s  the mindset every year. It was the same way as a player. We got to figure out how to get in the dance and once we get in the dance we’ve got a chance. Our goal has not changes. It’s to win a world championship. We’ve had to take a step back a little bit. We’re young. We realize that but the goal is still to win a world championship."

Know this: Elway will not be taking a quarterback in the early rounds.