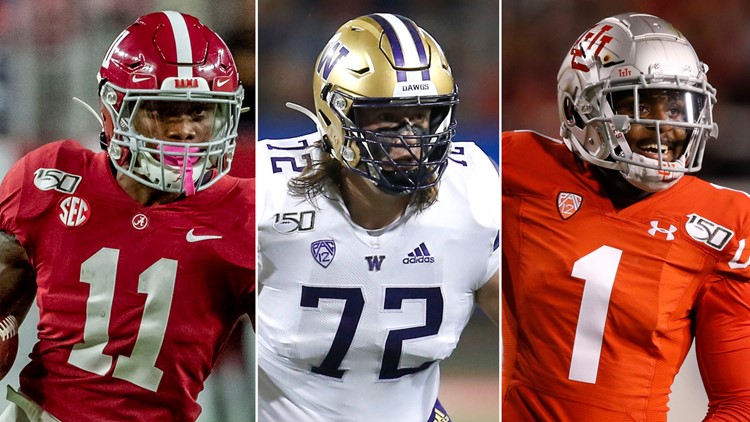 Mike and the Mystery Mockster's early answers for Broncos 2020 draft

ENGLEWOOD, Colo. — All NFL mock drafts are an exercise in futility.

And any mock draft prior to the awarding of compensatory picks and the start of free agency – when teams first address needs – are extremely premature.

But we live in a country that eats, sleeps, works and talks to the guy on the kitty corner bar stool all things NFL. You can either fight against the ever-expanding tide of mocksters with logic or you can ignore sensibilities and join its wave of immense popularity.

The latter is more fun.

9NEWS has called in its Mystery Mockster, who not only had no chance of waiting until after free agency, he made his first Broncos’ rough mock draft one month into the college football season.

Now is the time to begin. For the Broncos, the reality of three consecutive losing seasons has been difficult. The potential of better days ahead with young quarterback Drew Lock and an even younger crop of new players zaps Broncoland with hope.

Here then is the 9NEWS Mystery Mockster’s picks for the Broncos in the 2020 NFL Draft that is still three months away.

(Note: After the third round, the exact draft number is unknown because the league has yet to award compensatory picks following rounds 3 through 7).

Three wide receivers could go in the top 15.

(Laviska Shenault Jr., receiver, Colorado would be another dynamic playmaker available at 15).

If the Broncos go defense at No. 15, Javon Kinlaw, defensive lineman, South Carolina or Kristian Fulton, cornerback, LSU, would be the choices.

9NEWS comment: Many early mocksters have the Broncos taking Ruggs, even though he was the Crimson Tide’s third-leading receiver this year behind Jerry Jeudy, who figures to battle Oklahoma’s CeeDee Lamb as the top receiver drafted, and Devonta Smith, who decided to return for his senior year at Alabama.

No mock matters, though, until the Mystery Mockster delivers.

Ruggs perfectly suits the Broncos, though, because he reportedly is a 4.2-second-in-the-40 burner. As the Mystery Mockster said, Sutton is the Broncos’ big, strong possession receiver who can run after the catch and win those jump-ball battles deep down the sideline. The Broncos need a speed guy who can push the safeties back.

Ruggs averaged 18.7 yards a catch as a junior this season and also had a 75-yard rushing touchdown. He also returned kickoffs.

There is a good reason, however, for the Broncos not to take a receiver at No. 15. This draft is considered to have such a deep receiver class that the Broncos can take a much needed cornerback in the first round and still get a very good pass-catching target for Lock at No. 46.

Sutton was a second-round pick (No. 40 overall) in 2018. Then again the Broncos waited until the second round in the strong receiver class of 2014 to take Cody Latimer at No. 56 overall and missed on Davante Adams, who was taken three spots earlier by Green Bay.

Mockster: Cornerback! It would be great to see C.J. Henderson, Florida; A.J. Terrell, Clemson or Trevon Diggs, Alabama drop to 46 but it’s more realistic for Jaylon Johnson to be there.

Bryce Hall, Virginia would have been a 1st round lock if not for the unfortunate injury.

If we happen to go defense or offensive tackle in round 1, I like Jalen Reagor, receiver, TCU or Brandon Aiyuk, receiver, Arizona St in round 2.

9NEWS comment: Broncos general manager John Elway and his top lieutenant Matt Russell personally watched Ohio State cornerback Jeff Okudah play against Penn State on November 23. But that was when the Broncos seemed a decent chance to pick in the top 10. Lock’s late-season performance dropped the Broncos’ pick to No. 15.

Okudah will be gone by 15 but the Broncos’ need for a cornerback will still be there (unless it is addressed in free agency).

Reagor is another speed demon receiver.

Mockster: Surprisingly, a couple of the top running backs are headed back to school.

9NEWS comment: Elway and Russell like to take college tackles even if their plan is to move them inside. By and large they are the better athletes among offensive lineman. See, Dalton Risner and Connor McGovern, college tackles who were moved inside by the Broncos.

Adams is reminiscent of former Broncos’ offensive tackle Ryan Harris – a projected first-round pick until a back injury prior to his senior season dropped him down a couple rounds. Adams could do worse than duplicate Ryan Harris’ 10-year NFL career.

Defensive linemen will be a need as the Broncos’ season-opening D-Line starting trio of Derek Wolfe, Shelby Harris and Adam Gotsis are all free agents. The Broncos will try to bring one back – either Harris or Wolfe – but probably not two.

As for running back, the Broncos will bring in competition for Royce Freeman as the 1B complement to Phillip Lindsay. Providing they don’t go big with a Derrick Henry/Melvin Gordon/Kenyan Drake type in free agency.

The Mystery Mockster especially liked Alabama’s Najee Harris late in the third round until the running back decided to return for his senior season.

9NEWS comment: If the Broncos don’t re-sign free-agent Will Parks they will need a sub safety and special teams player. Winfield’s dad was a former Jim Thorpe Award winner as the best defensive back in the nation in 1998, then played 14 seasons in the NFL.

Antoine Jr. had a whopping seven interceptions as a redshirt sophomore for the surprising Gophers this season, plus 3.0 sacks. Hard to believe such a playmaker will make it this far in the draft but he is a tad undersized for a safety.

The Broncos may also need a center to compete with Austin Schlottmann if they don’t re-sign free-agent Connor McGovern.

Nate Stanley throws a pass during the first half against Illinois, Saturday, Nov. 23, 2019.
AP Photo/Charlie Neibergall

Mockster: Always have to have an Iowa prospect.

9NEWS comment: Tight end Noah Fant and linebacker Josey Jewell were nice selections in the previous two Broncos drafts. And long-snapper Casey Kreiter has been a clutch free-agent pick up.

Stanley was a three-year starter for the Hawkeyes who went 3-0 in bowl games. Nice sized at 6-foot-4, 243 pounds. The Broncos figure to add a veteran backup to Lock via free agency or trade so unclear if the Broncos will add young quarterback depth through the draft.

Taking a quarterback in the late rounds probably depends on whether the team believes Brett Rypien is ready to become a legit No. 2.

9NEWS would rather go inside linebacker with fresh legs who can help on special teams here. But that’s one reason why these mock drafts are so popular: They’re subject to debate.