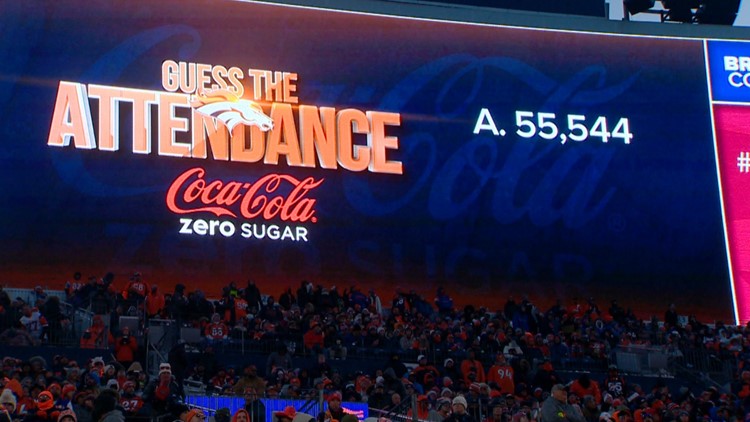 9 reasons why 19,094 Broncos fans didn't show up for game Sunday

DENVER — Each of the 19,094 ticket-buying Broncos fans who didn’t show up to watch Drew Lock’s NFL debut Sunday had their reasons.

Credit the Broncos for announcing the no-show number. They are the only NFL team that engages in this practice of transparency and self-loathing. Everybody else hides behind their misleading paid attendance.

Still, you could have filled the Pepsi Center with the fans who didn’t show up Sunday for the Broncos’ game Sunday against the Los Angeles Chargers at Empower Field at Mile High.

We’ll give you 9 excuses why the Broncos had their smallest crowd in at least 9 years:

It’s one of the busiest travel weekends of the year, so it only makes sense that many Broncos fans were either out of town, or didn’t feel like a Sunday outing after just getting back in town.

To my naked eye, the smallest home crowd I had witnessed was Nov. 28, 2010, when the Broncos played the St. Louis Rams. That was also the Sunday after Thanksgiving.

That also may have been the only time in years the Broncos didn’t announce their no-shows. I went back and read all the Denver Post accounts from that game and nowhere is the number of no-shows mentioned.

Depending on where you live, it dumped 2 to 3 feet of snow from Monday evening until late Tuesday afternoon. Worse, the temperatures fell to 5 degrees overnight Tuesday into Wednesday morning.

So the snow didn’t go anywhere. People were hunkered down last week. Business at restaurants and bars was slow.

Another hopeless Broncos team wasn’t going to cause people to get up off their coach.

Not only did the Broncos bring a 3-8 record into their game Sunday against the Chargers, they brought in a 3-8 record following seasons of 6-10 in 2018 and 5-11 in 2017. The Broncos have been bad three years in a row. Each year brings a little less excitement.

Keep it up and there might be 20,000-plus no-shows for their final two home games December 22 against the Detroit Lions and December 29 against the Raiders.

It was 33 degrees at kickoff but that was only for those sitting in the sun on the east side of the stadium. And the windchill brought it down to the 27 degrees.

It was frigid for those sitting on the Broncos’ side, where the sun doesn’t shine at any point in the game.

For competitive reasons – or as Vic Fangio deemed it, “just playing silly games” – the Broncos’ football bosses didn’t want the public to know that Lock would make his NFL debut Sunday.

The football bosses decided on Tuesday the second-round rookie would start, but they never did make the announcement.

9News reported the likelihood of Lock starting all week and was the first to report early Saturday afternoon he would definitively start.

For everybody else, it wasn’t known the rookie would make his debut until he trotted out for the first series of the game. Who knows, maybe someday 19,094 fans will look back and realize it was a history-making event and tell everybody, “I was there.”

After the turkey, dressing, potatoes and two kinds of pies feast on Thursday, a significant percentage of fans probably weren’t craving a Thunder Dog, nachos and craft beer on Sunday.

Why let all that good food in the fridge go to waste? Stay home, watch the game on TV and raid the refrigerator.

All that snow followed by the four-day weekend meant it was the first time for many Coloradans to hit the slopes.

8. Chargers? Who wants to go see the stinking Chargers?

There are heated rivalries. And there are teams who you wouldn’t care if they ever came to town again. We mean you, Arizona Diamondbacks.

The Chiefs have Mahomes, the Raiders will always be the Raiders (until they move to Las Vegas, at which time their sinister patch should be exchanged for a glitzy ornament.)

The Chargers never moved the needle, not even to their own fans, wherever they are. Philip Rivers has gone from villain to an aging player you almost feel sorry for. Almost.

9. Did we mention the Broncos are not a good team?