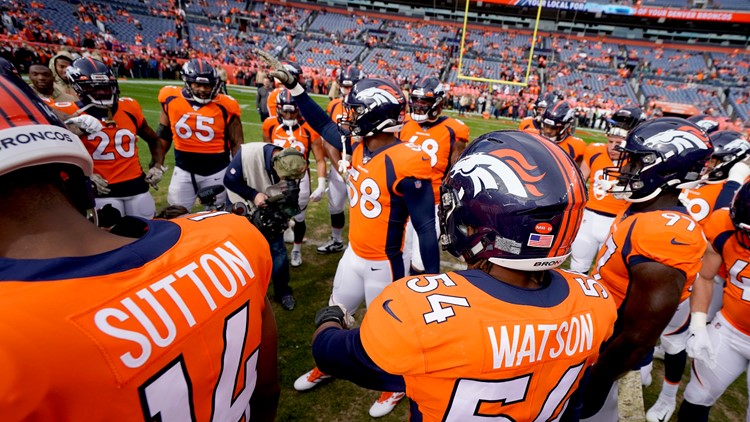 Photo by: AP
Denver Broncos outside linebacker Von Miller (58) huddles up his teammates prior to an NFL football game against the Cleveland Browns, Sunday, Nov. 3, 2019, in Denver. (AP Photo/Jack Dempsey)

ENGLEWOOD, Colo. — The Broncos charter flight landed back Sunday from Minneapolis at the decent hour of 6 p.m. Denver time.

It’s the one advantage of playing an early game on the road.

After a long taxi and deplane, the team’s traveling party moved single file into the caravan of five busses that would take everyone back to Broncos headquarters and their awaiting cars.

Von Miller got an idea. Before the large vehicles rolled, the Broncos top star jumped from player bus to player bus and told everyone, let’s have dinner at Del Frisco’s Steak House at around 8, 8:30. Not mandatory or anything. (Von knows some players are husbands and fathers, first).

But if you can make it, let’s hang.

“He got up and he was like, ‘Hey guys, the energy we had at practice that week, the energy that we had in the game, let’s keep it going,’’’ said safety Will Parks.

They came from all sides of the ball -- offense, defense and special teams. Backups and starters. Shelby Harris and Adam Gotsis brought siblings.

What did they talk about? Apparently it depended on where you sat at the table.

“We kind of just had a heart to heart,’’ said safety Justin Simmons. “We could feel something special was brewing. That first half that we played as a team—special teams, offense and defense—it wasn’t perfect but the energy felt different. The vibe was just different … from the times that I’ve been here the past three years playing. That game just felt different. It felt like we were kind of gelling more and more each game as a team.

“It’s unfortunate the way it ended because it didn’t reflect how well we played in the first half and how hard we’ve been playing all season long, but that’s something that we talk about.’’

Said Parks: “Conversations were about different things. ‘How’s your mom doing?’ ‘How’s your family doing?’ ‘You OK?’ ‘Don’t worry about that play.’

“We mentioned it here and there, but it wasn’t designed to talk about the game. It was more designed to keep guys in it, keep guys into this coaching staff, into the building and into the culture that’s trying to be built around here. That’s ultimately to win football games. I think that Sunday night told us a lot about our team.”

RELATED: Klis' Mike Drop podcast: Broncos coming off the bye, 1-on-1 with Connor McGovern and looking ahead to the Vikings game

Apparently, it was a nice, team-bonding moment, although to be clear, post-victory dinners are way more joyous.

“I think everybody was upbeat, but for me, I’m always mad when we lose,’’ said cornerback Chris Harris Jr. “I don’t like to lose at all. No matter how we lose and how fun it was early -- it was fun but losing is not me.”