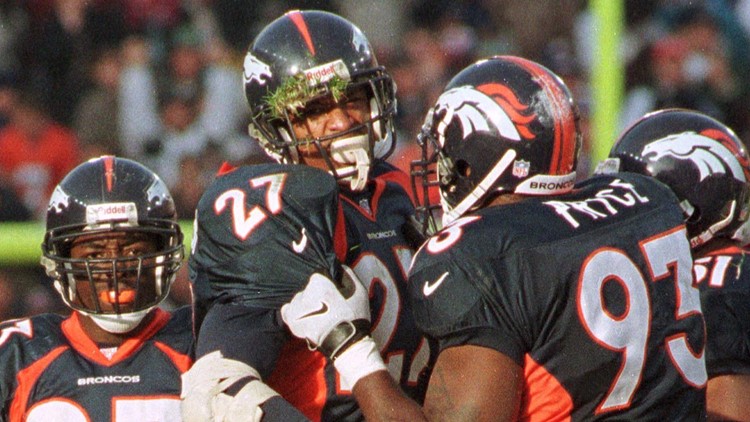 Photo by: AFP/Getty Images
Denver Broncos Steve Atwater (C) and Trevor Pryce (R) celebrate Atwater's interception during the first half of their game against the San Diego Chargers 21 December at Mile High Stadium in Denver, CO. The Broncos won 38-3.

ATLANTA — When considering the merits of Steve Atwater as a Hall of Famer, the 48-member voting committee shouldn’t waste time discussing his candidacy.

They should simply put the video of his monstrous hit on Christian Okoye on a continuous loop. Several repetitive blasts on the Nigerian Nightmare should convince all that

Atwater is worthy of having his bust bronzed in Canton, Ohio.

“That’s been played and played," Atwater said in an interview Thursday with 9News while taking a break from his own Orange and Blue radio show here on Radio Row. “That was definitely a highlight of my career – I think that’s what most people know me for. But there’s some other parts to it, too."

There were also eight Pro Bowl appearances in his 10 seasons with the Broncos. He started on the Broncos’ back-to-back Super Bowl title teams in 1997-98.

Yet, for some reason, it took a while for Atwater to gain momentum as a Hall of Fame candidate. In his 15 years of Hall of Fame eligibility, he didn’t make it to the cut of 25 semifinalists through his first seven years. And while he has been a top 25 semifinalist each of the past eight years, Saturday will only be the second time he will receive consideration from the final voting committee as a top 15 modern-era finalist.

“I am, too," said Shannon Sharpe, the former Broncos’ tight end and member of the Hall of Fame class of 2011. “Because he was one of the preeminent safeties of the 90s. I mean you go to eight Pro Bowls in 10 years it says something.

“Almost knocked everybody out in our secondary and knocked Robert Woods out in the Super Bowl. For me it’s a no-brainer. Great guy. He’s very, very deserving of going into the Pro Football Hall of Fame."

Atwater has said the No. 1 highlight of his career was when teammate John Mobley knocked away Favre’s fourth-down pass to clinch the Broncos’ first-ever Super Bowl title in January 1998 in San Diego. Only it took Atwater a while for his head to clear and truly appreciate the moment.

Atwater had delivered a hit so hard on third down with 36 seconds remaining, he knocked out Brooks, secondary mate Randy Hilliard, and himself. Atwater was in a fog watching from the sidelines when Mobley stepped in front of Packer tight end Mark Chmura for the game-clinching, fourth-down break up.

That may be Atwater’s favorite moment. To other Broncos fans – and to NFL fans in general – to think Atwater is to think of that Monday night game at old Mile High Stadium in week 2 of an otherwise disappointing Broncos’ season.

The 260-pound Okoye, who was coming off a league rushing title with 1,480 yards, was running through a large hole off right guard at the Broncos’ 15-yard line.

“Just think what he would have done to me," Phillip Lindsay, the Broncos’ 184-pound rookie running back, said here Thursday off Radio Row. “He would take people’s lives.

I’m glad he’s on my side and he’s not playing any more."

RELATED | Champ Bailey as he awaits Hall of Fame vote: 'It's nerve-wracking'

Working against Atwater’s chances of Hall of Fame election is that two other safeties are considered cinches: Ed Reed and Johnny Robinson. A third safety would be difficult when there are other deserving players at other positions.

Still, Atwater was a Hall of Fame-caliber player who deserves election. What does he think about his chances for election Saturday?

“I’m excited. Can’t wait. Hopefully by 4 oclock eastern time Saturday we’ll know. I’ll either be crying and jumping up and down or I’ll be like, ‘all right, maybe next year.’’’