Blue Jays' shortstop is hitting an even .300 in his career while showing dad-like power. But mom deserves just as much credit for Bo's baseball success. 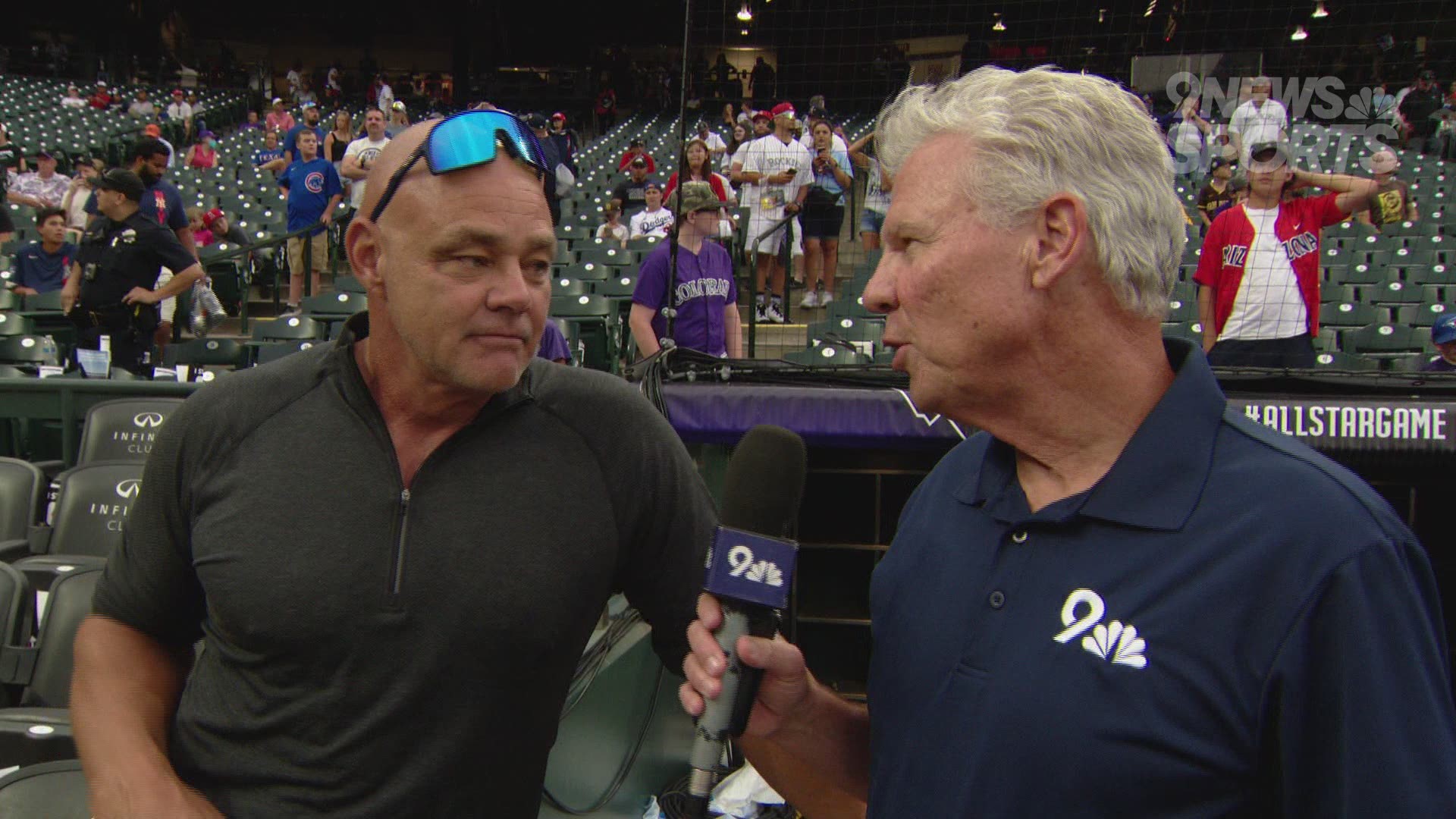 DENVER — Bo Bichette is here, 23 years after his father Dante played in the 1998 Major League Baseball All Star Game at Coors Field.

So it stands to reason dad is a big reason why Bo is an All Star, too, right son?

"Obviously, he helped me get a head start," Bo Bichette, the Toronto Blue Jays’ young shortstop, said during his All Star press conference Monday afternoon from McGregor’s Square. "But he didn’t really want me to play baseball. He wanted me to play tennis growing up. A lot of why I’m here and why I’m playing well is because of him, but I think if he had his way, I wouldn’t be here.”

"A lot of tennis coaches wanted to take him to the next level,'' Dante said in an interview with 9NEWS from behind home plate during the National League All Star batting practice session Tuesday. Upon Dante’s retirement as a player, he frequently played in competitive adult tennis leagues in Florida. "I wanted that because then I’d be hanging out at the country clubs. And I ended up hanging out at hot and sweaty baseball fields my whole life. But hey he got me here so.’’

Sometimes, it takes a while for a person, and his dad, to find what he was born to do. Bo Bichette was 4 months old when his dad played in the 1998 All Star Game at Coors Field.

“Surreal. It’s almost like it was supposed to be,'' Dante said Tuesday. "To see him out there, it’s weird, man, in my mind. But when he goes to the plate tonight I feel like I’m going to be seeing through his eyes because I’ve seen that before in an All Star Game and a packed house. It’s going to bring back some flashbacks when I played."

>>Video below: Bo and Dante Bichette walk down the "purple carpet" at the introductory event before the All-Star Game 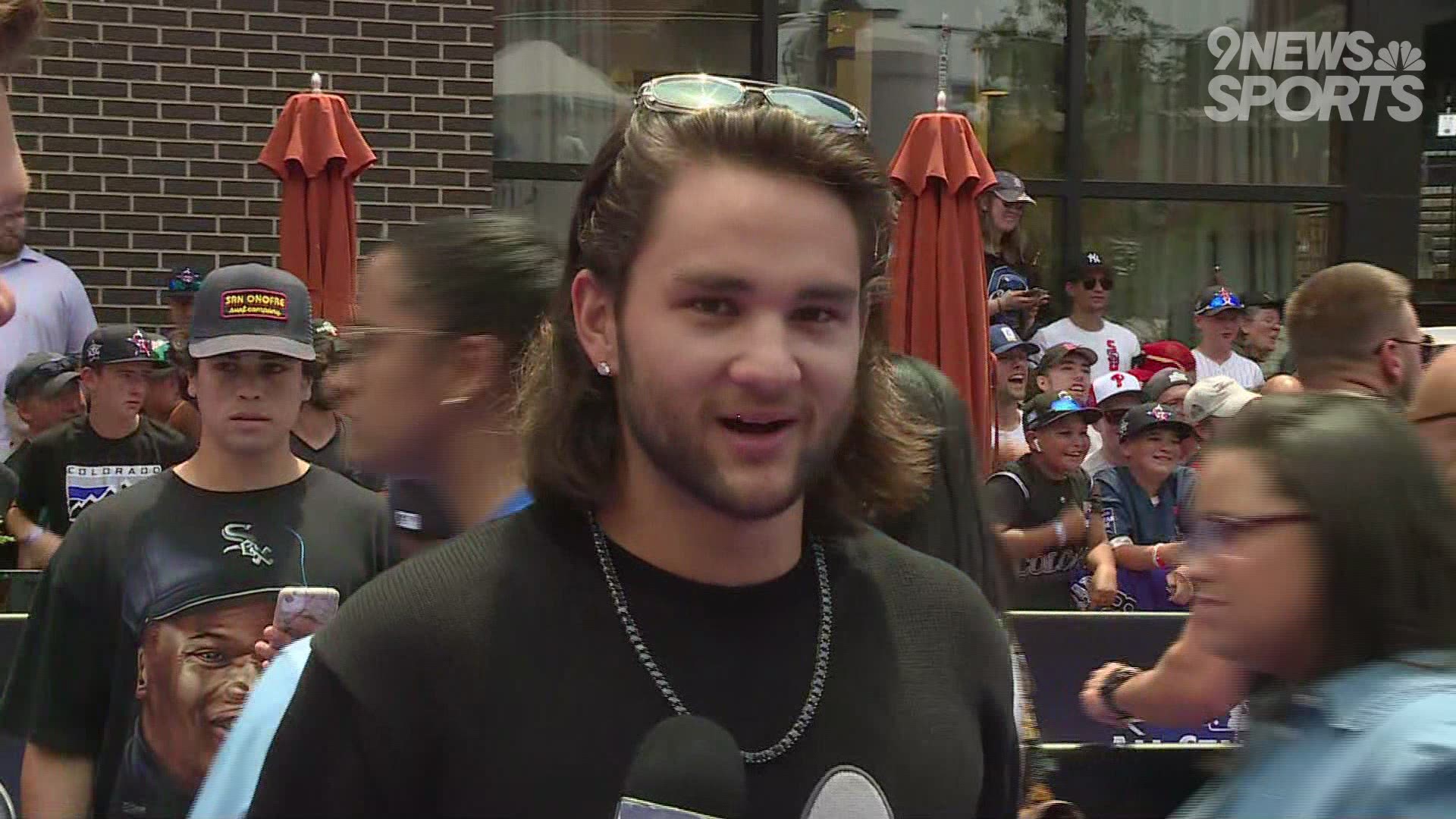 Dante was an elite hitter who could slug. In his seven seasons with the Rockies – from the team’s inaugural season of 1993 through 1999 -- he hit .316 while averaging 29 homers and 118 RBIs a year. He wasn’t exactly a Gold Glover in left field, but his clutch hitting more than compensated for any defensive deficiencies.

In fact, with apologies to Todd Helton, Nolan Arenado and Matt Holliday, it says here Bichette is still the best clutch hitter in Rockies’ history.

His oldest son, Dante Jr., was also a power hitter and corner infielder who was the New York Yankees first draft pick – No. 51 overall in the supplemental first round – in 2011. After a torrid start, Dante Jr. played eight seasons in the minors but stalled at the Double-A level, as so many fine prospects do.

From this lineage, Bo Bichette somehow became a shortstop.

"I don’t know, maybe my mom’s genes," Bo said. "She’s a little smaller than dad is, obviously. Dad’s a big guy. Probably a little bit of her genes. Gave me a little more mobility than my brother and my dad."

Not that Bo is limited to old school shortstop power. He broke in with the Blue Jays as a 21 year-old in 2019 and hit 11 homers in 46 games. He played half of the shortened 2020 season, then made a polished leap this year. He is batting .293 with a robust 16 homers and 57 RBIs while stealing 12 bases in 12 attempts.

“He wants to be complete,'' Dante said of Bo. "And he is old school. The biggest compliment I get is when ex-players – (former Rockies closer) Curtis Leskanic called me the other day and said, ‘Dude, I love watching your kid play.'

"He’s old school. He goes down the line hard. He plays the little game. He grinds through two-strike at-bats. That’s the biggest compliment I get from the ex players that I played with.’’

Bo has made an error or two too many, perhaps, but he has great range and a world-class arm that is often displayed on the nightly highlights.

Some of his middle infield proficiency can be credited to the tennis playing days of his youth.

"I think footwork, definitely, getting your body in the right position to get the good hop on a tennis court," Bo said. "But I think mentally, tennis is really challenging. You’re out there by yourself. There’s no one to lean on, not a coach, not a teammate, so I think it helped me in that sense a little bit more."

Here in Rockies Country, Bo will always be connected to his dad, even if he was too young to remember seeing him play. Bo was 15 when Dante served the season of 2013 as the Rockies’ batting coach under manager and former teammate Walt Weiss so there were plenty of batting practice and groundball sessions at Coors Field. But the truth is, Bo is a self-admitted mamma’s boy.

And Bo says Mariana Bichette is just as responsible for his success as dad.

"She would do anything to be at my games, my brother’s games," Bo said. "There were times when she would be in Atlanta for my brother’s tournament, his game would end at 1 pm and she had 8 hours to get to my game at 7. And she would drive just to catch the last couple innings. She was awesome like that.

"Normally at that age, not a lot. I learned quickly that I needed to prepare."

Bo’s mom and dad will be among the Coors Field sold out crowd Tuesday night. He has now played in exactly 162 games spread over three seasons and his totals are impressive: .300 batting average – one point better than his dad finished with following his 14-year career -- 32 homers, 101 RBIs, 20 stolen bases.

"I stopped talking hitting to him at an early age because I saw he had such a good feel and thought process that I said, 'I’m not going to put anything in your mind, and he’s really good up here (pointed to brain) hitting,'' Dante said. "It’s been neat to watch.”

"What my dad did here was awesome," Bo said. "A lot of people loved him. But I’m going to just go out there and play the game as hard as I can."