Bobby Massie a Coloradoan before he became a Bronco 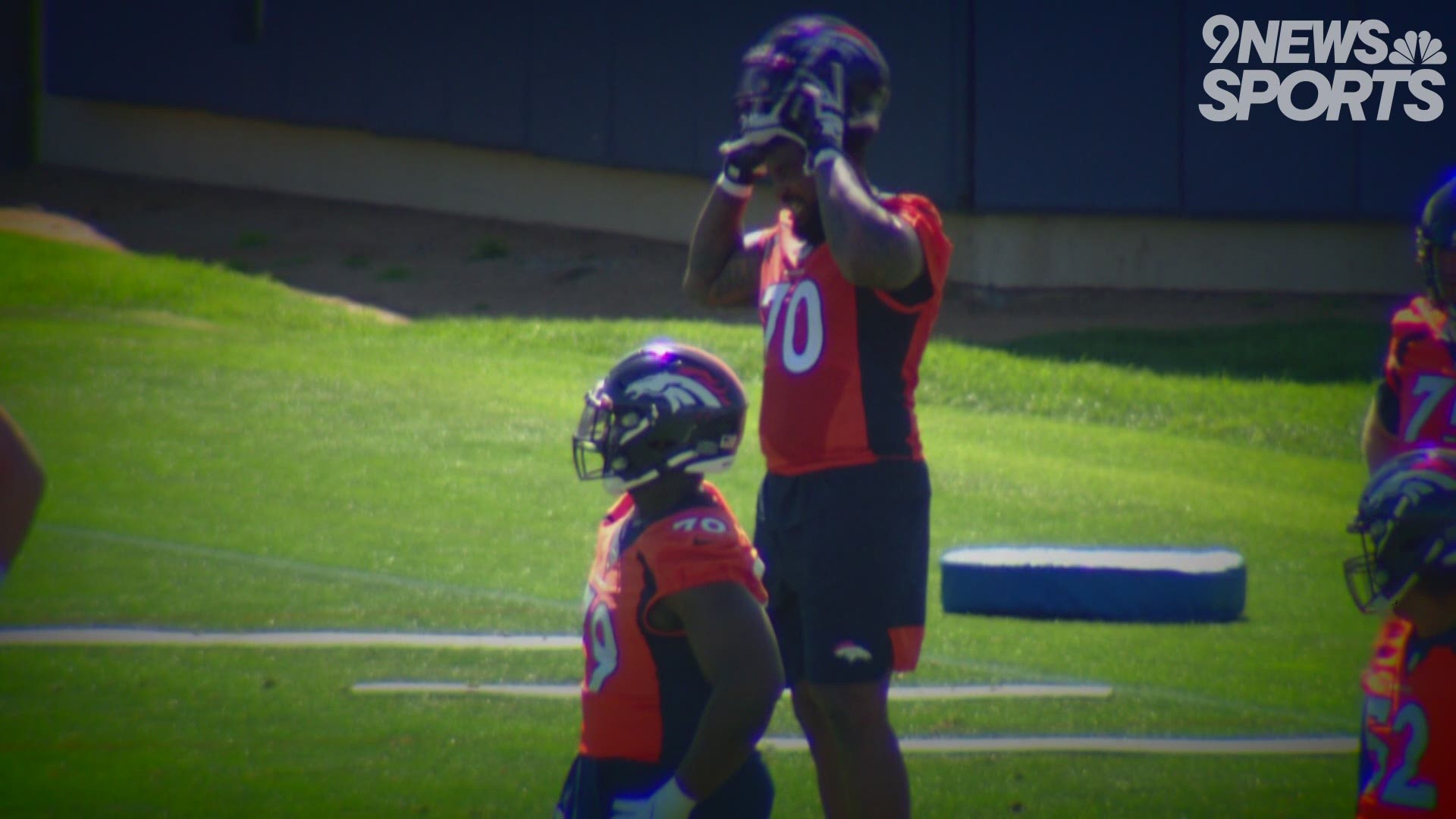 “My wife and I, we visited here a lot for the past six years,’’ Massie said Friday in a sit-down interview with 9NEWS. “We just recently bought a home here this past September. So we planned on coming to live in Colorado before I ended up signing with the Broncos.”

Massie was playing for the Arizona Cardinals when he and Angel first made the trek to the Rocky Mountains’ most popular state. After four years with the Cardinals, Massie was a five-year starter for the Chicago Bears. All during his off-time in Chicago, he and Angel had their sights on Colorado.

“My wife and I, we wanted to find a place to start our family,’’ Massie said. “And of all the places – she’s a huge hiker. And she tries to drag me along to it. But, I’m too big for that (stuff) right now. But, I’m a huge fisherman. I used to hunt growing up and it’s something I want to get into when I have the opportunity away from football and Colorado seemed like the perfect place for the both of us.”

So with their new home between Denver and Colorado Springs, signing with the Broncos became a coincidental convenience for the Massies. When Ja’Wuan James went down last month with a season-ending Achilles injury, Broncos general manager George Paton set about to find his replacement through a tryout of four veteran right tackles with NFL starting experience.

Massie wound up beating out Cameron Fleming, Dennis Kelly and Jermaine Eluemunor for the right to sign a one-year, $2.5 million contract. (A couple days later, Fleming signed a one-year deal for $1.67 million with the Broncos.)

As an eight-year starter with two different teams, it had been a while since Massie had been through such an audition.

“I hadn’t done nothing like that since the Combine,’’ said Massie, a rookie in 2012. “It was new to me. This altitude kicked my ass. But, it was a good workout and they liked what they saw.”

With Massie turning 32 in seven weeks, and after earning more than $36 million in his NFL career (according to Spotrac), and after nine years of banging his 6-foot-6, 315-pound frame in the trenches for nine seasons, many players in a similar situation would have hung ‘em up. But, Massie showed he really loves the game by deciding to hang in to play for a third team – even if it is in his favorite state – on a one-year, team-favorable deal.

“It is a love for the game,’’ said Massie, who grew up in Lynchburg, Va. and played his college ball at Ole Miss. “It’s what I’ve been doing my whole life. And I still can do it, so might as well keep doing it until I can’t  anymore.

“I come from a small town and there was nothing else to do except hunt, fish and play football. It was Friday Night Lights, that type thing and I always watched it on TV when I was younger. It was always a dream of mine since I was in elementary school. From the blessings of the Lord and all the hard work I’ve been able to stay in this (NFL) game for 10 years.”

The Broncos not only need Massie, they could use for him for all 17 games this season. Since the team moved Orlando Franklin from right tackle to left guard prior to the 2014 season, right tackle has become the Broncos’ 'Black Hole.'

Massie raised his eyebrows in surprise when he was told the Broncos had 17 different starters at right tackle in the past seven seasons.

“Do my job and be consistent,’’ he said. “As long as you don’t hear my name on TV it means I’m doing something good. Open holes for the backs and keep the quarterback clean.”

Players who have started at right tackle for the Broncos since the end of the 2013 season:

Left tackle may still get more attention and money than right tackle but Massey says the skill-set gap has closed since he’s been in the league.

Massie suffered a pec strain last week that will sideline him through the Broncos’ minicamp practices this week.

“I’ll be ready for training camp,’’ he said.

He’s not unaccustomed to blocking through training camp with a quarterback competition behind him. He went through it just last year in Chicago where Mitch Trubisky and Nick Foles battled (Trubisky won it, then was benched and replaced by Foles, then got his job back, then moved on to free agency and Buffalo as a backup). For the Broncos, Massie will be blocking for either Drew Lock or Teddy Bridgewater.

“I’m just trying to get a feel for both guys,’’ Massie said. “Obviously, one is going to wind up being the starter. But, both guys are really cool. I’ve watched both of them in the past and watched game-tape on them. They’re great players. My job is to keep them clean. Give them time to make their reads and make their throws.”

Two of Massie’s years with the Bears overlapped with Vic Fangio as the team’s defensive coordinator. Massie’s reaction in January 2019 when Fangio left the Bears to become head coach of the Broncos?

“I wasn’t surprised,’’ he said. “Vic was a large part of the success we had in Chicago. He’s a helluva coach. He’s been doing this for decades and he’s coached a lot of great players and he deserved this job. He’s a really cool dude. First impressions you might think he’s got a mob mentality type thing but Vic’s a cool cat.’’

Any difference between Fangio the D-coordinator and Fangio the head coach?

“To me, he’s the same guy,’’ Massie said. “The bullets haven’t started flying, yet. Everything’s been real chill, but he’s the same dude. He’s a real dude. You can come talk to him about anything – a great coach.”

After the minicamp next week, Broncos veteran players will be dismissed until they have to report back for their first day of training camp July 27. Most players will head home for their five-week break. Massey is already right where he wants to be. What does Massey love most about Colorado?

“Fishing,’’ he said. “That’s my hobby. I fish every opportunity that I can. I just recently got into fly fishing a couple years ago. It’s my version of golf because I can’t golf to save my life. But I’m a huge bass fisherman. Catfish, crappie, bluegill. Majority in fresh water, I dabble in salt water a little bit. But, yeah, I’ve come to love fishing for trout out here.”