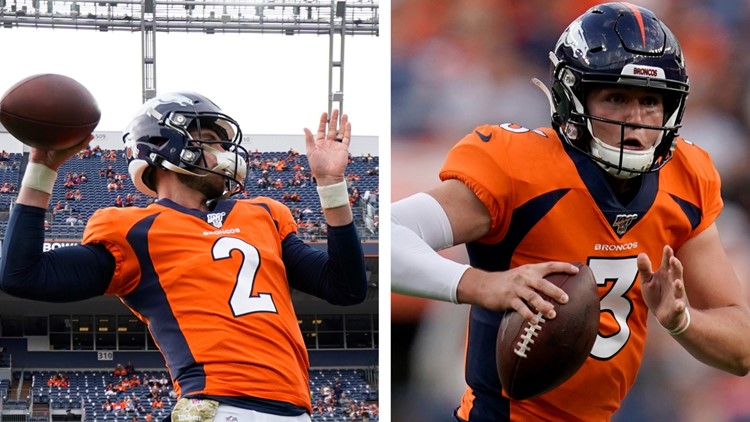 Brandon Allen has temperament to focus as Drew Lock lurks

The Broncos’ current starting quarterback sat for 3 ½ seasons in the NFL without taking so much as a kneel-down snap. That wasn’t easy.

After gathering all that rust, Allen was thrust into playing against the Cleveland Browns two weeks ago after getting just 3 practices and a walkthrough following the unexpected, season-ending neck injury to Joe Flacco. Allen played well, throwing two touchdown passes in a 24-19 defeat of the Browns. But it wasn’t easy.

Despite his impressive NFL debut, Allen enters his second NFL start Sunday against a tough Minnesota Vikings team while buzz around him is about how rookie quarterback Drew Lock is practicing with the expectation to eventually take over. That can’t be easy, either.

“I think there is a plan for him,’’ Allen said. “My focus is really just sticking to this game plan and trying to get a win this week. Anything else that happens from there, you’ll hear about it.”

We heard an update from Lock himself Wednesday. A few minutes after Allen addressed the media from the podium reserved for the Broncos’ starting quarterback, Lock was backlit to the sun as he faced a mob of cameras and reporters outside the team’s locker room.

Lock is news because for the first time in the regular season, he has recovered enough from his thumb injury to practice this week.

“It’s like I’m starting my journey back in the NFL all over again,’’ Lock said. “It feels good to be finally be out there with the guys.

“You’re involved with the team when you’re not practicing but it doesn’t feel the same when you’re not actually out there doing it with them. To finally be able to be out there and be around the guys and toss the ball around a little bit, it felt really good.”

Allen and Lock seem to be friendly. Allen was a redshirt senior at Arkansas when his Razorbacks hosted Missouri and Lock, who was then a true freshman.

Allen was on the better team, though, as Arkansas won 28-3.

“I still tell him about it,’’ Allen said with a wry smile.

“They did beat us when I was a young 18-year-old,’’ Lock said. “I think he was a fifth-year guy so what, (he’s) 22, maybe 23? I was very young, but then I think we took care of business the next couple of years. I kind of claimed that back from him and it was against his brother (Austin). I think I got the family outright.”

Allen said not much of his life has changed since he became a successful starting NFL quarterback, other than “I think I’ve got more Twitter followers now.”

He couldn’t have picked up that many more as his account has 46.4K followers.

But if it’s going to be difficult to deliver a strong encore performance Sunday against the Vikings knowing his team wants to eventually replace him with the promising rookie, Allen is strengthened through the experience that it’s never been easy.

“This league’s so competitive and there are so many good players waiting for an opportunity that every week you have to be on top of your game,’’ Allen said. “If you’re not, that next guy behind you is ready to get in there.”

Bryce Callahan remains a long shot to play this season. After sitting out virtually the first 9 weeks of practice, the cornerback was unable to practice on back-to-back days. He practiced a little bit Tuesday. “Just OK, not great,’’ said head coach Vic Fangio. Callahan didn’t practice Wednesday. He may try to practice Thursday. …

Near the end of practice Wednesday, veteran cornerback Coty Sensabaugh was informed he had been waived off the roster to make room for cornerback/punt returner Cyrus Jones, who was claimed off waivers from Baltimore.

Jones had 12 punt returns for a 9.4-yard average with the Ravens this year.