The second-year player from LSU has delivered all 1,302 snaps in his NFL career. 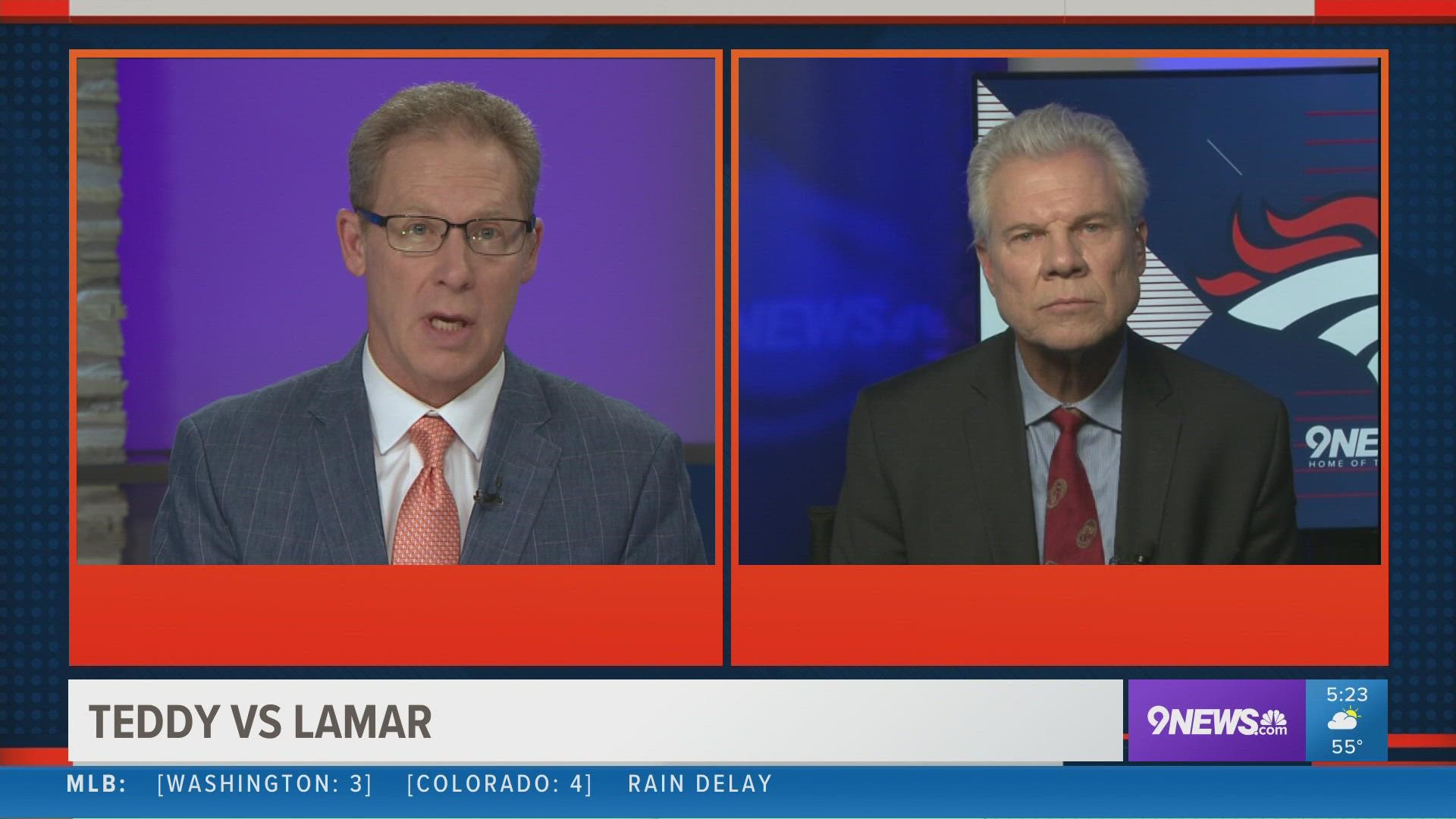 ENGLEWOOD, Colo. — No one grows up dreaming of playing center. They may dream of playing football in the NFL, as Lloyd Cushenberry III did from the time he was 8 years old.

“No, not at all,’’ Cushenberry, the Broncos’ second-year starting center, said in a sit-down talk with 9NEWS this week. “Growing up I played tight end and defensive end all throughout Little League and middle school. Once I got to high school I went to offensive line and I actually played tackle in high school, which is kind of unbelievable at my size. But as I started to get recruited (by colleges), teams were telling me guard, maybe center. And LSU came to me and told me the same thing.

“And once I got to campus I was playing both and kind of had to learn center on the fly. Teach myself how to snap and all the things a center does and by my third year I was starting at center and it’s taken off ever since.”

Given Cushenberry’s upbringing, it’s a bit of an upset he’s playing football at all. His parents grew up in a small town of Saint Gabriel (pop. 6,433) outside Baton Rouge and raised three children.

“Great family. My mom and dad are kind of like myself, quiet, mind their own business,’’ he said. “I had a great childhood. I’m the youngest (older brother and sister) so I was always the baby. So a lot of love from my family. And they’re rooting every week

“My brother, all my cousins, uncles they all played basketball in high school. Broke a lot of records in my hometown so they’re well-known. I was the first one to take football seriously and I’ve known since I was 8 years old this is what I wanted to do.”

Now that safety Justin Simmons has surrendered his snap streak at 3,278, Cushenberry is the Broncos’ new Iron Man with 1,302 consecutive plays, starting with his first snap in his rookie 2020 season.

“It’s a blessing,’’ Cushenberry said. “To be able to come out every week and stay healthy and be available. That’s a big deal at this level is being available to your team week-in and week-out. Just want to be able to keep it going, continue to get better every snap and see where we can take it.”

The Broncos rookie class of 2020 had to make an unfortunate adjustment. Jerry Jeudy, the first-round pick, went 38-4 with two national championship game appearances in his three years at Alabama. Second-round pick KJ Hamler went 20-6 in the two seasons he played at Penn State. Cushenberry, a third-round pick, went 15-0 for the national champion LSU Tigers in his redshirt junior season, a year he sent shotgun snap after shotgun snap back to Heisman Trophy winner Joe Burrow.

And Cushenberry did so while wearing the prestigious No. 18 jersey that is given to the player who is, first, successful, and secondly, carries a selfless spirit. Among other qualities.

“That was a big deal to me because at LSU it’s a big deal,’’ Cushenberry said. “It symbolizes who’s a leader of that team, a guy who does the work from Day 1, a guy who’s respected in the program. It started with (quarterback) Matt Mauck. He’s our team dentist here in Denver. It started with him in ’03 and it’s continued on and the list of guys are great guys who wore the number, so it was a big deal.”

In his first year with the Broncos, Cushenberry had to learn how to deal with losing. The Broncos went 5-11 last year, although they’ve rebounded nicely this year as they’re 3-0 going into their measuring stick game Sunday afternoon at Empower Field at Mile High against the perennial playoff contending Baltimore Ravens.

“Lots of ups and downs last year after coming from the top of the mountain in college to the NFL,’’ he said. “Lot of ups and downs, but that’s the game. You’ve got to love the wins and the losses. Take it with a grain of salt and just move on.

“We’re 3-0 right now, we’ve got to keep it going. We’ve got a tough challenge this week, we’re looking to get to 4-0 to close out this first quarter and we’re going to keep rolling. It’s the NFL, there’s going to be a challenge every single week. No matter what the team’s records are that we’ve played or going to face, everyone is good at this level. We’ve just got to be prepared and remember it’s all about us.”

The center position has grown on Cushenberry to the point he identifies with it. There’s the physical aspect of snapping and blocking. And there’s the cerebral requirements where the center has to call out blitzes and identify the middle linebacker (Mike) pre-snap for the entire offensive line.

“Love it,’’ he said. “It’s kind of like being a point guard up front. You’re in control of everything. There’s a lot of pressure, but at the same time the guys that can handle it are the guys for the job. I’ve come to love it. Even the process throughout the week, Wednesdays, Thursdays, showing the blitz cutups, watching film on your own, you have to love it at this position. I feel like that’s every position, really. You just have to love the process.”

As for its physical nature, fans and even players other than quarterbacks may not realize no two centers snap the same way. Some snap it hard against the hands and explode out to block. Others take a more firm approach. Third-round rookie Quinn Meinerz and starting quarterback Teddy Bridgewater had trouble with the snap during training camp. It’s one reason why Meinerz has been getting as much work at guard during the regular season and center Austin Schlottmann has been elevated from the practice squad two of the past three games.

With Cushenberry, neither Bridgewater or backup quarterback Drew Lock has had problems.

“We made it clear in camp, I have a little longer arms so they don’t have to get in too deep,’’ Cushenberry said. “I’ll get the ball to them. So that’s the only difference really. But I think I hit the same spot every time when they’re there under center. We haven’t had much trouble. It’s being consistent.”

The Broncos are a much improved team this year and while the newcomer Bridgewater deserves most of the credit, do not underestimate the competitive value Cushenberry reinforced to his returning teammates. Cushenberry could have been satisfied with his rookie season. He made the NFL’s All Rookie Offensive team. He was one of just two rookies who played every snap – offensive tackle Tristin Wirfs of the Super Bowl-champion Tampa Bay Buccaneers was the other.

Yet, during his first offseason press conference, Cushenberry was asked what he thought about the Broncos following up his third-round selection in 2020 with Quinn Meinerz, a guard the team was going to convert to center, in the third round of this year’s draft. To his credit Cushenberry humbly said his play wasn’t good enough to be handed the job a second year without being tested.

“I expected, 100 percent, after that last snap, walking off the field, I guess January 3rd of last season, I knew they were going to bring someone in whether the draft, or free agency because my play wasn’t up to par last year,’’ he said. “So I expected that. Just like you have to love the process within the season on Wednesdays and Thursdays, you also have to love the process in the offseason. Love that competition to push yourself to get even better.

“And that’s the approach I had this past offseason and it was nothing new to me. Even at LSU, before my third year, going into my first year starting, I had doubts and they had competition. They weren’t sure I was the guy. And I just put my head down and just like this past offseason, just worked. And that’s what I’m going to continue to do.’’

Challenge of Calais and company

Cushenberry is large at 6-foot-3, 312 pounds, but size is relative inside the NFL trenches. Does he prefer to go against ginormous defensive tackles who are difficult to move, but may not move well themselves? Or the smaller, quicker defensive tackles?

“Up front, it doesn’t really matter,’’ Cushenberry said. “We’ve got to do our job regardless. Last week we had guys who were getting off the ball. That’s what they’re taught. They’re a 4-3 defense, the Jets, and they were getting off the rock. This week is a little bit different. They’re bigger guys, more stout. But at the end of the day we’ve got to get the job done. It starts with us upfront. No matter what their plan is, it’s all about us. We’ve got to do our job.”

He’ll have to be on top of his game mentally and physically Sunday. He’ll be physically tested against the large likes of Calais Campbell and Brandon Williams and the Ravens’ defensive front. And he’ll have to be mentally sharp as there’s a chance Cushenberry will be flanked by inexperienced guards Netane Muti and Meinerz against a Ravens’ defense that loves to blitz.