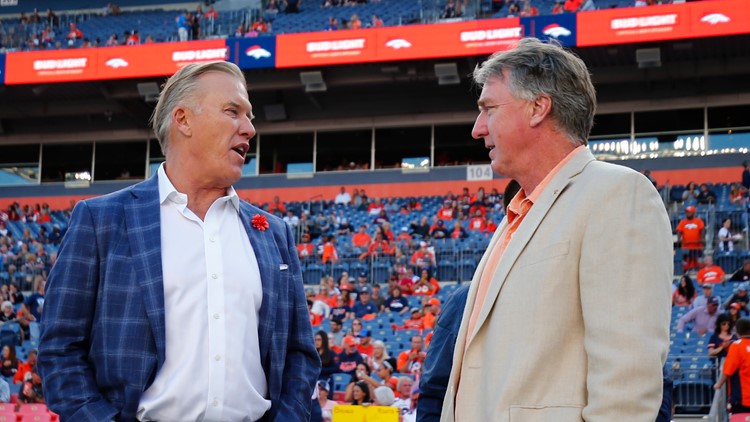 Broncos' Ellis on Brittany Bowlen rejoining team: 'She’s got to roll up her sleeves and work ... that's what (her dad) wanted'

The Broncos’ chief executive officer and president couldn’t have handled them with greater contrast.

One, the 21-year agreement to rename Broncos Stadium to “Empower Field at Mile High,” was met with over-the-top celebration. There was a two-day media rollout that included a large-staged press conference emceed by Dave Logan, a catered breakfast and decorated cupcakes. And then there was a 1,000-person rally at Empower headquarters.

Ellis’ other off-field win -- the dismissal “in its entirety” of Bill Bowlen’s lawsuit against trustees Ellis, Rich Slivka and Mary Kelly of the Pat Bowlen Trust, was downplayed barely with comment.

“It doesn’t really change anything,’’ Ellis said in the 9NEWS/Channel 20 Broncos pregame show on Monday night. “I don’t think it was that big a thing for anybody. It was just unfortunate that we’re in the courts in those situations but the outcome is what we expected and we’re moving forward with Pat’s plan.’’

And that plan has been firmed up. Brittany Bowlen is the clear favorite of Pat Bowlen’s seven children to one day succeed the team’s late owner. She is passing her one year anniversary of working at McKinsey & Company, the highly regarded global management consulting firm, this week. Soon she will rejoin the Broncos' front office (Brittany Bowlen was a business analyst working primarily in the finance department for the Broncos in 2015.)

After multiple private meetings with Ellis in recent weeks, Brittany Bowlen’s move to a Broncos’ senior management position, job description and start date have been clarified.

“No one gets anointed,’’ Ellis said. “She is going to work for us. She’s coming in at the end of November. There’s four or five strategic initiatives she’s going to help oversee. We’ll see. She’s got to roll up her sleeves and work hard. That’s what Pat wanted so we’ll see how it goes.’’

Ellis understands any off-field developments concerning the Broncos pales compared to how the team performs on the field. And the Broncos turned in a disappointing performance while losing to the Raiders in the opener, 24-16.

In his conversation on the 9NEWS/Channel 20 pregame show, Ellis alluded to the fact there would be games like the one against the Raiders. The key is how the team responds this week against the Chicago Bears and beyond.

“A lot of quiet confidence,’’ Ellis said. “I’m optimistic. But as I’ve told you in the past, I guard that. As you pointed out, 11 wins in the last two years, we’ve got a ways to go. But our guys are ready. I’m excited to see how we do tonight and how we progress throughout the season. I think that’s important for us to look at as a franchise.’’