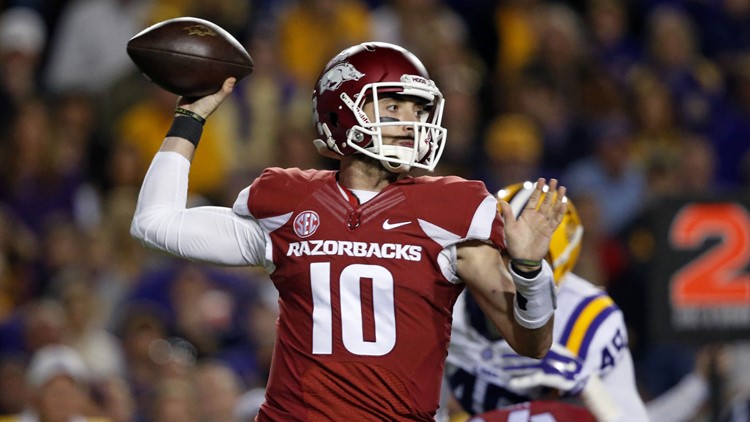 ENGLEWOOD, Colo. — Sitting can help if you sit long enough.

Brandon Allen sat the first 3 ½ seasons of his NFL career. He didn’t throw one pass. He didn’t even take a kneel-down to end a half or mop up a lopsided win.

So when Allen finally did get the chance to play following the season-ending neck injury to Joe Flacco, the Broncos’ prospectus were grim. They were already 2-6. Grimmer than that.

Allen, though, has exceeded every expectation – which wasn’t difficult considering there was none. But he’s played considerably better than hoped, leading the Broncos to a win against the Browns and completing a bunch of deep balls early and staying composed throughout while nearly upsetting the heavily favored Minnesota Vikings.

“I would say a spark,’’ said top receiver Courtland Sutton when asked what Allen has brought to the team.

Only don’t say “spark” around Brandon Allen. Prior to his junior season at Arkansas in 2014, his truck and two other vehicles were set ablaze in a suspected arson.

“Losing games, I guess,’’ Allen said Wednesday to media laughter. “We’ve got a lot of die-hards there in Arkansas. We live and die by Arkansas football. A couple of rouge fans, I guess.”

The fire occurred a couple days before  the start of the 2014 season opener. But the Razorbacks’ 3-9 season in 2013 apparently lingered. The fire was after his truck and house had already been egged.

Maybe it wasn’t sitting 3 ½ seasons that helped Allen when opportunity came. Maybe it was playing under Razorback duress that came in handy 3 ½ years later.

“You learn hard times, you learn adversity and you learn how to come out the other end, I think,’’ Allen said in his typical unemotional, steady cadence. “There are a lot of guys that they only have success and they don’t know how to handle losing. You’re going to lose in the NFL. It’s just too hard to win every game. I think learning from adversity and being able to handle bad times and come through it was good for me.”

As for sitting all that time, Allen said that helped, too. It must have.

“I think there was (a benefit),’’ he said. “Just the amount of football I learned in the four years I was out and being able to sit back and watch how guys prepare and how a lot of defenses do certain things versus different quarterbacks. I think it definitely helped to be able to learn more before just getting thrown in there early on.”

Brandon Allen has a below-average 49.2 percent completion rate through two games. But he also has 433 passing yards, 3 touchdown passes against just one interception, and a couple, 11-yard scrambles to convert third downs. He will get his third NFL Sunday at Buffalo where the Bills rank No. 3 in both defensive yards and points allowed.

“He brings an excitement that only he can bring,’’ Sutton said. “The things he’s able to do, getting out of the pocket and extending plays, he plays with such a confidence that just allows everybody around him to play with confidence. It was really good to see him having the success that he’s having and continuing to improve each week.”

Broncos head coach Vic Fangio was asked if it’s important for his to see second-round rookie quarterback Drew Lock play at some point this season.

He then delivered a short history lesson, as he’s known to do, before he returned to quarterback of interest.

Lock will be activated from the injured reserved list either next week before the Chargers game in Denver or the following week at Houston.

But that doesn’t mean he will play. He does figure to start in at least the final two home games against the Lions and Raiders. But even those two games may not help the Broncos get a good evaluation read on Lock.