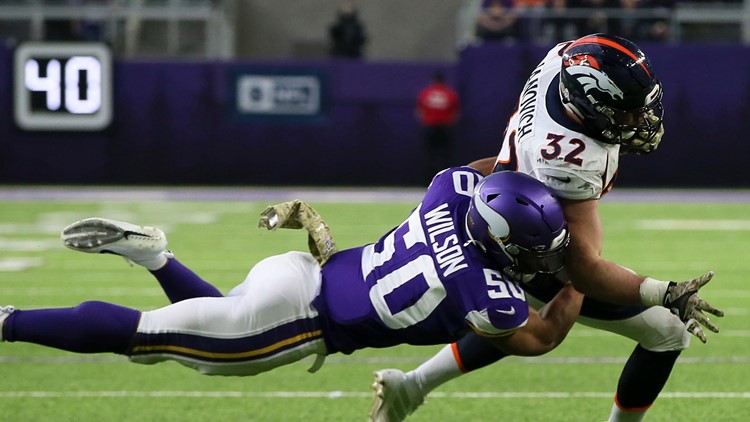 MINNEAPOLIS — Andy Janovich is finished for the season after the Broncos fullback suffered a dislocated right elbow near the end of the first half, a source told 9News.

He will have an MRI exam Monday morning to determine the  extent of possible ligament damage. The doctors will then put together a plan for his recovery.

Janovich had scored on an impressive 1-yard touchdown plow early in the second quarter. Later, on the first play after the 2-minute minute warning, Janovich caught a short out pass from Brandon Allen for a 3-yard gain to the Vikings’ 11 yard line.

Carrying the ball in his left hand, Janovich reached his right hand down to brace his fall, but there was no give in the turf. His elbow dislocated out of socket. Janovich rolled in pain and held his elbow as he walked to the sidelines.

He was immediately ruled out.

Andrew Beck, an undrafted rookie who plays tight end and fullback, replaced Janovich in the second half. Janovich missed the first three games of the season with a partially torn pectoral muscle.

Broncos general manager John Elway took issue with an anonymously sourced report by CBS Sports that claimed strife is developing between head coach Vic Fangio and some of his players and offensive coaches.

“Hey, let me tell you this: Vic is fair and straightforward. Period,’’ Elway said as he walked Sunday toward the team busses following the Broncos’ gut-wrenching, 27-23 loss to Minnesota. “He’s the head coach and it’s OK for him to give his opinion.

“If you’re happy with things and worried about criticism you’re in the wrong (bleeping) game. It’s not a personality contest. It’s about winning.”

Broncos’ inside linebacker Todd Davis was all over the field and finished with a game-high 13 tackles. He was a big reason why Vikings’ star running back Dalvin Cook was held to 26 yards rushing on 11 carries. …

Broncos cornerback Davontae Harris was second on the team with 9 tackles, but he was picked on in pass coverage in the second half and was replaced by Isaac Yiadom.