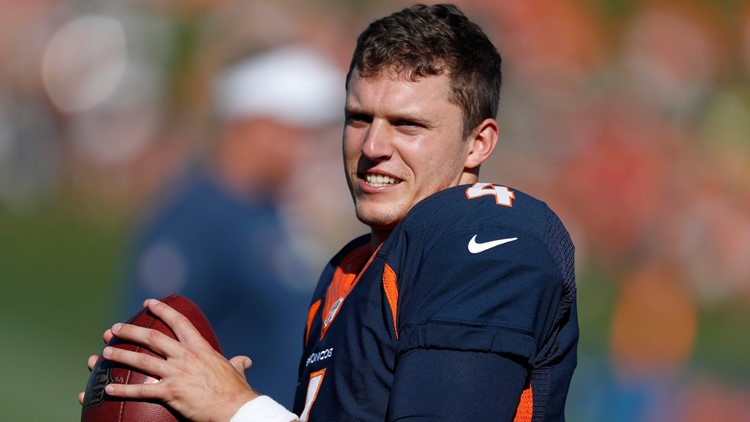 ENGLEWOOD, Colo. — The Broncos took an educated gamble on No. 3 quarterback Brett Rypien and played it right.

Rypien did clear waivers Monday and re-signed with the Broncos’ practice squad. He had been the Broncos’ No. 2 quarterback behind Brandon Allen for three games until the team activated Drew Lock from injured reserve on Saturday.

The Broncos discussed cutting a player at another position but ultimately there were so many injuries up and down the roster, the team couldn’t justify carrying three quarterbacks.

Lock is now the starting quarterback and Allen, an unrestricted free agent at season’s end, is the No. 2.

Rypien surprisingly went undrafted after four seasons as a starter for Boise State, although he did sign what is termed a “premium college free agent” contract with the Broncos. He completed 27 of 44 for 207 yards during the preseason with a game-winning touchdown pass to Juwann Winfree.

Understand, all head coaches are prone to uttering headline-making statements in the few minutes after a game then they are during the week when they’ve had a night or two’s sleep to calm down.

Fangio inadvertently knocked offensive coordinator Rich Scangarello after the game Sunday when asked about not taking a knee with 9 seconds remaining and the score tied 20-20.

“The first thought that the offensive coach said, ‘just take a knee,’ Fangio said, referring to Scangarello. “I said, ‘No.’’’

With less emotion and a clearer mind, Fangio recounted the conversation differently Monday.

“What happened there was … Rich asked me if I wanted to take a knee and I said, ‘No,’’’ Fangio said. “And that was that.”

In the first comment Sunday, Fangio showed Scangarello who’s boss and came out the hero. On the second comment Monday, Scangarello ASKED Fangio whether to take a knee. Big difference.

“At first, I suggested going over the middle with something deep down the middle and bang a timeout,’’ Fangio said. “He wasn’t too keen on what we had available there, so we just said, ‘Let’s throw a deep ball to Courtland and see what happens.’”

On Friday, Fangio said if James is playing, he’s starting so it will be interesting to see if right tackle Elijah Wilkinson is replaced, or Wilkinson shifts to left tackle and replaces Garett Bolles.

Fangio added Monday that James won’t play every snap, so there may be some type of rotation. James has missed 10 full games this season and most of two others because of a left knee injury.

Bolles has been heavily criticized this season because of his holding calls, but he appeared to play well Sunday against the Chargers.

Broncos’ No. 3, or slot, receiver DaeSean Hamilton had two catches Sunday against the Chargers, his first receptions since Game 7 against the Kansas City Chiefs.

But he also dropped a middle pattern in which he was so wide open, he would have converted a third-and-12 with 4:36 remaining and the game tied, 17-17.

Hamilton was fortunate that on fourth down, McManus came through with a 52-yard field goal that gave the Broncos a 20-17 lead.

“He’s going to have to overcome that drop,’’ Fangio said. “He can’t have a hangover from it. He’s got to get back on the saddle, be ready for the next one that comes his way and catch it. That’s the biggest thing you worry about and he’s got to acknowledge that he dropped it and move on.”