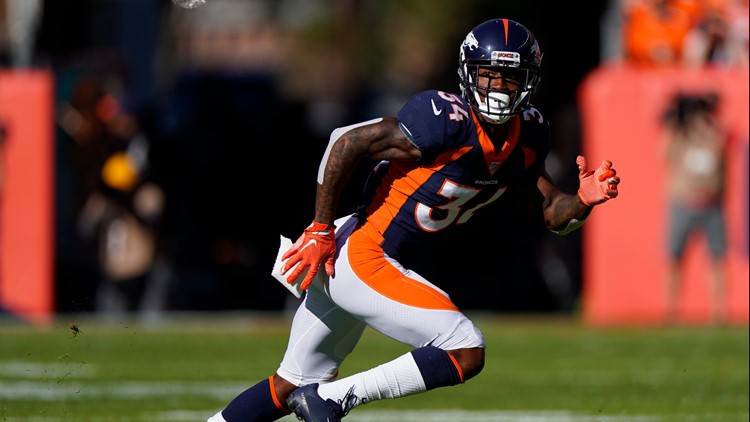 Photo by: AP Photo/Jack Dempsey
Denver Broncos strong safety Will Parks during the first half of an NFL football game against the Tennessee Titans, Sunday, Oct. 13, 2019, in Denver.

Broncos notes: Will Parks to miss at least 2 games after undergoing thumb surgery

ENGLEWOOD, Colo. — The Broncos will not have Will Parks for at least the next two games after the safety underwent thumb surgery Friday morning, sources told 9NEWS.

Parks is in a cast after the surgery, which is not considered season-ending. He suffered the injury in the second quarter of the Broncos’ 30-6 loss to the Kansas City Chiefs on Thursday night. Parks started the game surprisingly as the team’s No. 3 cornerback who guarded Chiefs’ speedster Tyreek Hill in the slot.

He held Hill without a catch, too. The Broncos play the Colts in Indianapolis next Sunday and then are home Nov. 3 against Cleveland. Then comes the bye week, which will give Parks three weeks to heal.

There is hope he can play with a cast shortly after the bye week, either Nov. 17 at Minnesota or Nov. 24 at Buffalo.

The Broncos heard from their angry home crowd Thursday night. The jeers primarily descended upon the team’s inept offense.

RELATED: Not ready for primetime: Broncos embarrassed at home by Chiefs, who lose Mahomes to injury

The offense was pathetic, giving up a touchdown on a sack-fumble, eight sacks in all, and going 1 of 13 on third down. Fangio was asked if his offensive coordinator Rich Scangarello was going through first-year growing pains.

“Yeah, we all do,’’ Fangio said. “Obviously, a legitimate but poorly-timed question in light of last night, but I think Rich is doing good overall. Obviously last night was not a proud moment for any of us and we’re going to work to get it better.”

Fangio said the players on injured reserve who are most immediately eligible to return – quarterback Drew Lock, running back Theo Riddick, tight end Jake Butt and receiver Tim Patrick – will start practicing next week. Rules say only two can be activated on the team’s 53-man roster. Most likely those two players wouldn’t be activated until after the bye week. …

Fangio indicated right tackle Ja’Wuan James would return from his knee injury next week to play at Indianapolis. “Ja’Wuan, if we had had a normal week, probably could have played last night, but he didn’t feel comfortable, nor did I, of putting him out there without practice time. He hadn’t had enough quality practice time and he’d been out six weeks. I think it’s always a coach’s duty to not put a player out there that’s not ready.

“He’s cleared medically, but there’s another part of the equation when it comes to recovery and rehab. I don’t think he had completed that part yet.”