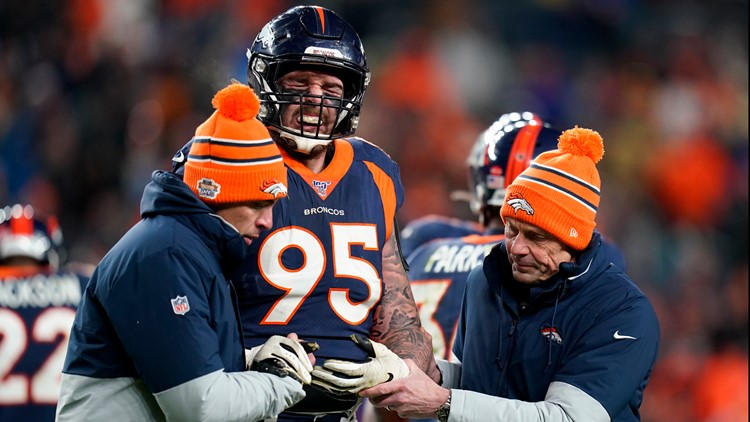 Photo by: AP Photo/Jack Dempsey
Denver Broncos defensive end Derek Wolfe is helped off the field after getting hunt during the second half of an NFL football game against the Los Angeles Chargers Sunday, Dec. 1, 2019, in Denver.

DENVER — It was coming together nicely for Derek Wolfe.

The Broncos’ most dependable defensive lineman since he was their second-round draft pick in 2012, Wolfe in many ways was having his best season. He had two sacks Sunday against the Chargers’ Philip Rivers to give Wolfe a career-best 7.0 sacks on the season.

Free agency and the riches from a third contract would be awaiting at season’s end. And then with the Chargers confronting fourth-and-1 at their own 34-yard line and trailing the Broncos 20-17 with 2:22 remaining, they ran a pitch play to running back Austin Ekeler, the native of Eaton.

Wolfe pursued and went down in serious pain with an elbow injury. The play was called off by a motion penalty.

Wolfe’s season may be called off, as well. At his locker following the game, Wolfe said of his injury, "It doesn’t look good."

He indicated he suffered a dislocated elbow and while more conclusive tests will be taken Monday morning, there is fear he will miss the final four games of the season.

>> Listen to a game recap on Klis's Mike Drop podcast below

Broncos head coach Vic Fangio on pass rusher Von Miller not playing, breaking his streak of 95 consecutive games dating back to start of the 2014 season:

"He was close. He went out and worked out extensively before the game. It was a painful decision for himself. He just didn’t think he could go the way he would want to go and decided that he wasn’t ready. I back him 100 percent. I told him before he went out there to work out, I said, ‘Whatever you’re feeling inside, I’m behind it 100 percent.’ It broke his streak which I know probably didn’t enter his mind too much. He wanted to play but just didn’t feel he could."

Right guard Ron Leary suffered a concussion in the game. Inside linebacker Alexander Johnson played with a heavy brace around his left knee and while he was affected, he still managed 9 tackles, second to Todd Davis’ 10.

The Broncos won even though they managed just 218 yards in total offense. They began the day ranked 27th in the NFL with an average of 302.8 yards per game. Washington was last with 253.4 yards per game.

Lock is the first Broncos’ rookie quarterback to win his debut since Gary Kubiak in November 1983.