Broncos kicker had a tough time putting in opening round of COBank Colorado Open but he says the experience will help him as a competitor. 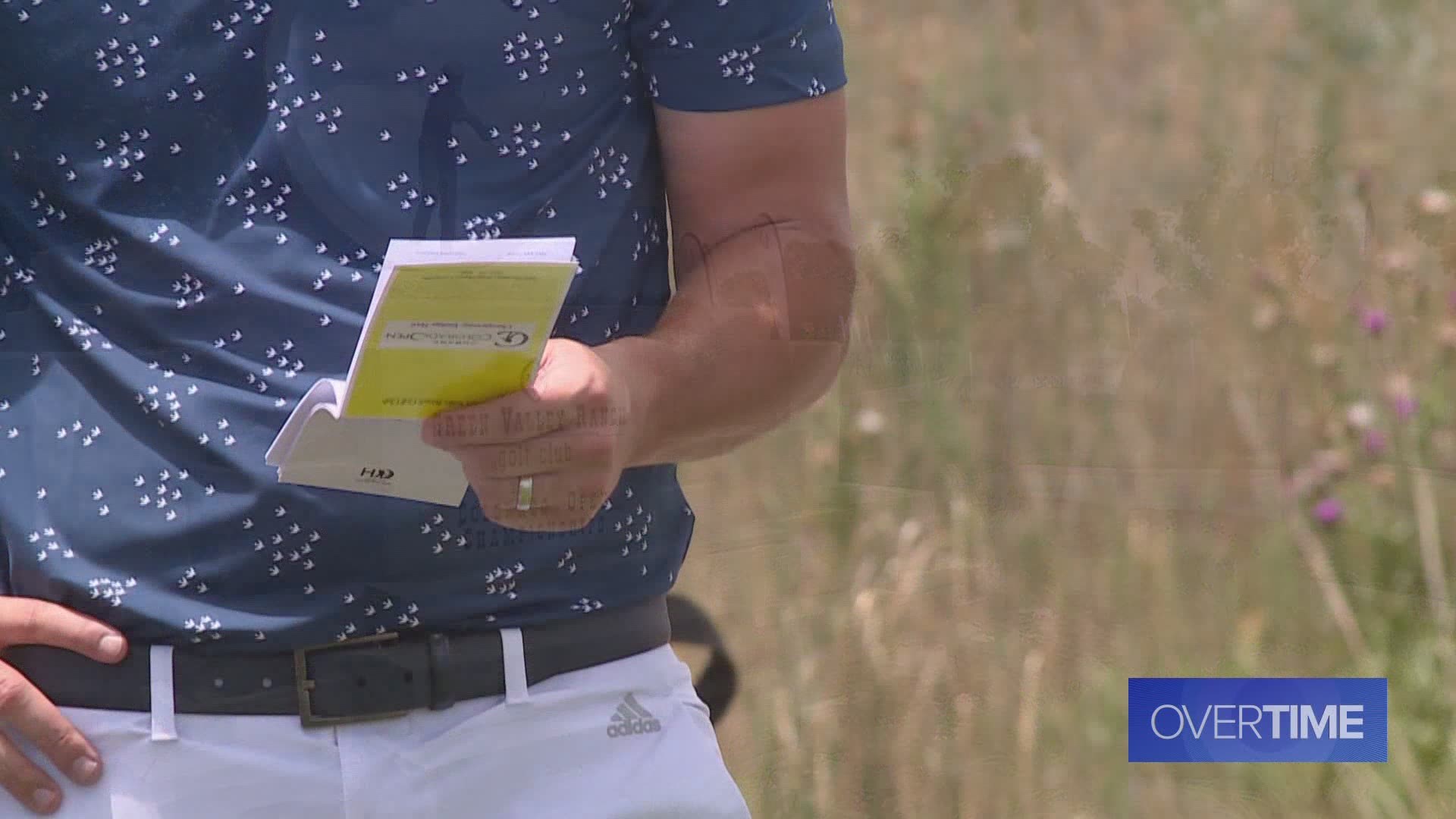 DENVER — Looking sharp in white pants, designer blue shirt and golf cap upon a tall, lean athletic frame, Brandon McManus was anxious about competing in a sport that doesn’t pay him.

His day job is as placekicker for the Denver Broncos, which means he works on Sundays in the fall. On a hot, sunny Thursday in late-July, McManus and his 2.1 handicap teed up at the COBank Colorado Open at the Green Valley Ranch Golf Club.

"I’ve said many times before I’d much rather have a 55-yard field goal to win a Super Bowl than a 4-foot putt," McManus said in a socially distanced, sit-down interview with 9NEWS prior to his opening round. "It’s that nerve-wracking to be on this course. So I’m excited to be out here and test my ability against all these great pros."

With his dad Dennis on his bag, McManus hit the ball extremely well early. He is long and accurate off the tee and his approach shots dig up large divots that create high, spinning shots on the green.

But he was struggling to read those Green Valley Ranch greens. He finished 10-over par with an 82.

Golf was hardly his only offseason activity in 2020. As the Broncos’ union player representative, he first was part of collective bargaining agreement negotiations that were finalized in mid-March, and more recently McManus has been trying to work out a new COVID-19 deal between the players union and owners.

"There’s a little bit of operational stuff with the traveling and hotels. I know they’re doing testing for the hotel staff members so they’re really going to an extensive level to make sure the players are safe. I think that’s going to go off without a hitch.

"I think the season is going to start on time. I don’t foresee anything that’s going to stop that."

There are some financial snags, mainly in how much the players would get paid if not all 16 regular-season games are played because of the pandemic.

"We still want to be compensated the way our contracts our signed out to be," McManus said. "Obviously, when we signed our contracts we were expecting to be paid if we play but in our new CBA the no force majeure clause that protects us against stuff like this if it happened, so there’s been a decent amount of snafus that have happened. There’s some separation on the financial aspect.

"But I think both sides have been pretty good now that we’ve got the daily testing. That’s key for us players to make sure they feel safe as well as their families will feel safe with them coming home."

McManus said he’s been in regular contact with Mark Thewes, the Broncos’ vice president of football operations and compliance about the extensive COVID-19 safety measures and protocols the team has put in place at the team’s UCHealth Training Center headquarters. The Broncos were one of the first teams to have their Infectious Disease Emergency Response (IDER) plan approved by the league and the players union.

"It’s (as safe) to be at the facility (as) it is at home," McManus said. "There’s no reason to feel threatened to go to the facility to work. We have daily testing for 14 days in a row which will help us keep the initial stuff away. Because as you know in training camp we’re pretty much locked there anyways.

"It will be a little different with going home. After we’re done practicing and lifting and doing virtual meetings at home. But it was a good win for us to at least get the daily testing for 14 days to make sure that people felt that extra comfort level coming to the facility."

The players, though, didn’t feel comfortable about playing preseason games. The owners wanted to play two preseason games, but McManus confirmed reports that it appears there will be none.

It’s not that preseason games by themselves are less safe than regular-season games, McManus said. It was more about the break-in period and timeline where the union didn’t believe there was enough time to make the preseason safe.

"If you remember my tweet from a month ago, get ready for one or zero," McManus said. "From what we had all discussed, at least from the union reps, was that there was an acclimation period that was supposed to be owners, doctors and our doctors, a joint committee, that said how long would it take players to get acclimated to practice football. And it was 21 days. So when you start doing 21 days and then add in helmet practices and then padded practices, the time frame didn’t work for preseason games.

"Obviously, the owners wanted to do that, and I feel bad as an undrafted rookie free agent myself -- those preseason games are huge to get film and stuff. That stuff is difficult, but for the safety reasons, making sure everyone felt safe and not traveling and doing this with games and exposing themselves, it was the best thing for the union."

Although his golf game fell off around the turn Thursday, McManus believes the golf swing reps in tournament golf will help as he tries to repeat his leg swing on Sundays.

"The mental aspect of the game is huge in golf and kicking," he said. "The swings are similar – golf is a little more upper body, but it’s the same upper body turn as you do kicking with the hips turned.

"That’s the cool thing about being out here is even though it’s different than kicking, it’s still somewhat about repetition in trying to figure out how to move the body and make it square on contact whether you’re hitting a golf ball or kicking a football. Any time you can come out here in a competitive nature it helps you in the future no matter what you’re going to do."