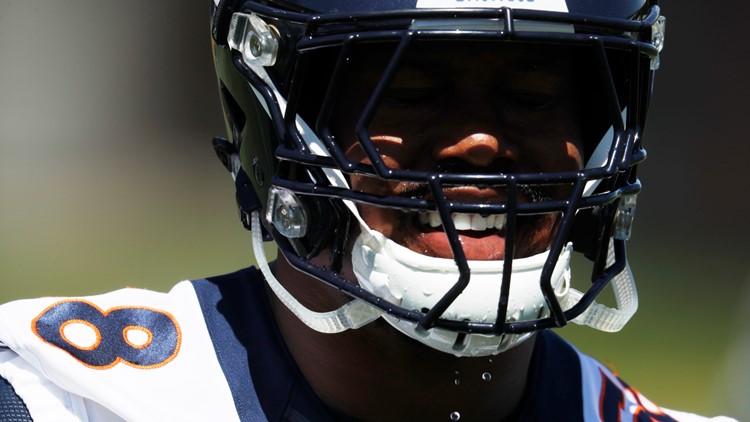 DENVER — Some statements were considered so instantly profound, they fossilized into idioms:

We conclude our daily look at the Broncos’ 2019 roster with outside linebackers – the best of the team’s position groups. At least among the starting 22.

With Broncos players reporting for their first training camp meeting Wednesday morning, here’s a preview of the team’s outside linebackers:

Miller and Chubb are right there with Miller and Ware circa 2015. Maybe not Miller and DeMarcus Ware of the 2015 postseason, when that duo destroyed the likes of Tom Brady and Cam Newton.

But with Miller playing this year at a prime age of 30 and motivated by the climb up the NFL’s all-time sack list (he is currently tied for 33rd with 98.0 sacks, 10 away from sole possession of No. 24), the 23-year-old Chubb expected to take another more step from his rookie-setting season of a year ago (his 12.0 sacks broke Miller’s team rookie mark), and first-year head coach Vic Fangio bringing in 32 years of NFL defensive intelligence, the Broncos may have their best single-season pass-rushing duo in history.

The concern: The Broncos’ backup edge rushers appear to be a ways from the young duo of Shaq Barrett and Shane Ray, who combined for 9.5 sacks in 2015 and ’16. Barrett and Ray each left for free agency after last season.

The pass-rushing duo combined for 26.5 sacks last year. A combined 30.0 sacks from this pair would be a lofty, but attainable goal for 2019.

Hollins, a fifth-round pick from Oregon, will also play inside linebacker in nickel situations. Watson is in his 10th  NFL season, second with the Broncos as he was also here in 2016. He is primarily known as a special teams standout but he also had 2.0 sacks for San Francisco last year.

Aaron Wallace, who played sparingly for 2 1/2 seasons with Tennessee before bouncing between the Titans, Bengals and Broncos in 2018, will also compete for a backup spot.

Hollins. If he can learn NFL techniques and add a little more strength on his 6-foot-5, 248-pound frame to go along with his 4.5-second/40 speed, he would have the potential to become more productive as a pro than he was at Oregon, where he had 14.0 sacks combined over his last years.

Holland and Reid both got nice undrafted signing bonuses but they are still undrafted players.

Wallace, who has some experience, was signed by the Broncos in the final week of last season.