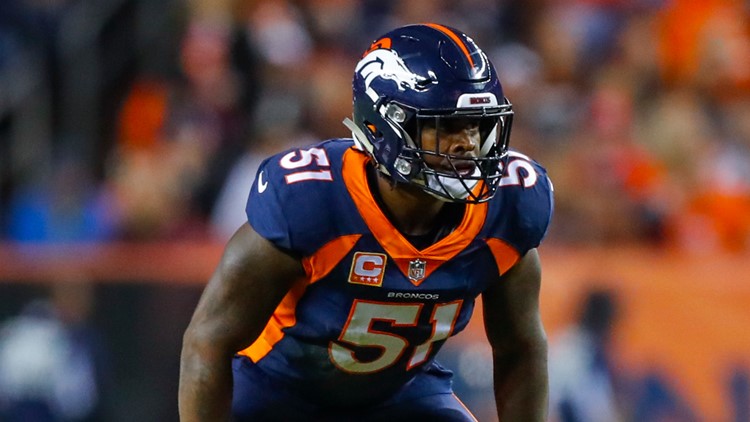 Photo by: AP
Denver Broncos inside linebacker Todd Davis lines up against the Kansas City Chiefs during the second half of an NFL football game, Monday, Oct. 1, 2018, in Denver. (AP Photo/Jack Dempsey)

Broncos roster preview: Inside linebackers strong against run but coverage is a question

ENGLEWOOD, Colo. — Todd Davis had gone from undrafted roster filler who had been cut four times, to Broncos’ tackle leader with a lucrative, multimillion dollar contract, to defensive co-captain and host of his annual draft party.

As anticipation built into nervous excitement on April 25 for the Broncos’ No. 10 overall pick in the first round, Davis was bowling and mingling with fans and families to raise money for his A+ Living foundation that benefited kids.

There was some awkward tension to his evening.

Numerous reports stated the Broncos were strongly considering using their No. 10 pick on a player would theoretically take Davis’ job.

As it turned out, Broncos’ director of player personnel Matt Russell did call team rep Derrick Thomas in Nashville, where the draft was held, and had him write Bush’s name on a card to be submitted to the NFL in the minutes before Denver’s time was up to make its selection.

But wait, Russell told Thomas. Don’t turn it in yet. Wait.

Davis and many of his Broncos’ defensive teammates had stopped rolling bowling balls to gather around the TV sets.

Bush did go No. 10. But not to the Broncos. That No. 10 pick was traded to the Steelers. The Broncos wound up taking tight end Noah Fant with the No. 20 pick.

Once the trade was made, the players at the bowling lanes looked at each other but said nothing.

It was so quiet, you could have heard Davis exhale.

Asked a month later if he was paying attention to the draft, Davis said, no. Then he laughed. Just kidding, he said.

“I was definitely glued in,’’ he said on May 30. “The talk of the town was linebacker at 10, so I was definitely glued to my TV. They didn’t pick a linebacker at 10. I felt like, ‘OK, that shows a little trust in me and it shows I have to prove everybody right.’ That is the biggest thing for me. If somebody goes out on a limb and makes a decision on my behalf, it’s my decision to make sure they made the right one.”

The thinking by Broncos general manager John Elway, Russell and Fangio was that while it’s true Davis and Josey Jewell -- the other inside linebacker whom the Broncos selected in the fourth round last year -- aren’t burners, they are still really good football players.

The enemy of good, sometimes, is great. And so the Broncos stuck with good and instead focused on other positions where good would be an upgrade.

Two days later, in the fifth round, the Broncos’ took long, tall, speedy Oregon outside linebacker Justin Hollins with the idea he could play inside linebacker on passing downs.

With the Broncos reporting to training camp on Wednesday and holding their first open-to-the-public practice Thursday morning at their UCHealth Training Center headquarters, here is a preview of their inside linebacker position:

Brandon Marshall had been the Broncos’ best all-around inside backer until his body started breaking down a couple years ago. He is now with the Raiders.

Davis and Jewell are tackling machines. The inside linebacker position in the Broncos’ base defense is a strength. In the nickel defense, it’s not so strong. The Broncos have struggled with covering running backs and tight ends in recent years.

Jewell replaced the injured Marshall in the starting lineup in game 8 last season and didn’t relinquish his role. He finished his rookie season with 51 tackles.

During the offseason practices, Davis and Jewell played plenty in the nickel defense and it was obvious both worked considerably on their quickness and speed in the offseason.

Like most 5th-round rookies, Hollins has a long ways to go. But the Broncos need him to come along quickly as his length and speed could match up well against the tight end likes of Travis Kelce, Eric Ebron and Hunter Henry.

Jones is considered more of a special teams standout than linebacker, but he did have a nice game last year at Cincinnati while playing inside linebacker, registering four tackles.

Bierria was a sixth-round draft pick last year who played in all 16 games, almost exclusively on special teams.

Dineen is an undrafted linebacker from  Kansas with promise and Johnson is the project from Tennessee who is must play well in the preseason if he is to make the 53-man roster.

Hollins. The projection is he will be an outside linebacker/edge rusher in the base defense and inside linebacker in the nickel defense. He will have to prove to the coaching staff during camp and the preseason he is ready for Sundays.

If not, the Broncos would likely an extra safety or cornerback on passing downs.

The backup slots behind Davis and Jewell are wide open.