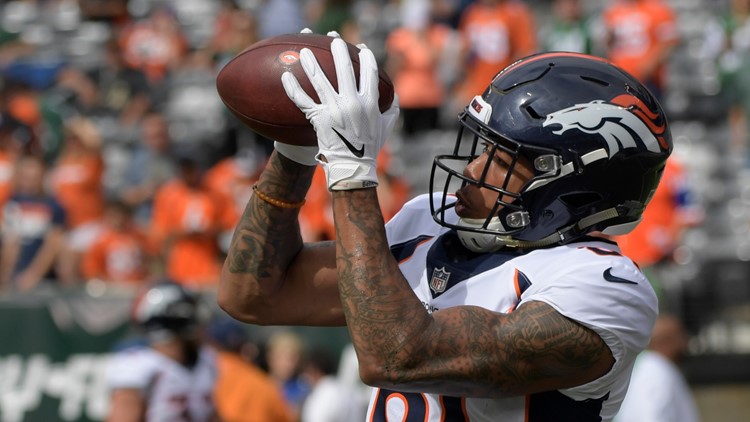 ENGLEWOOD, Colo. — Broncos’ backup receiver Tim Patrick will be out for six to eight weeks after he suffered a broken left hand in his team’s loss Monday night to Oakland, a source told 9NEWS.

The Broncos now must decide whether to carry Patrick on their 53-man or place him on short-term injured reserve, which already has a growing list of candidates.

Running back Theo Riddick, tight end Jake Butt and quarterback Drew Lock are also on IR with a chance to be activated in eight weeks.

Patrick suffered the injury in the second half of the Broncos’ game against the Raiders. He left the visiting locker room with a substantial cast around his left hand and two small fingers.

Patrick is the Broncos’ No. 4 receiver behind Emmanuel Sanders, Courtland Sutton and DaeSean Hamilton. Sixth-round rookie Juwann Winfree, who is on the Broncos’ 53-man roster, was inactive for the Raiders’ game but no doubt will move up for the game Sunday against the Chicago Bears.

The Broncos also have punt returner Diontae Spencer as their No. 6 receiver and practice squad receiver Fred Brown.